Thomas de Villiers is vice president of the board of the Howland Cultural Center in Beacon. He spoke with Alison Rooney. 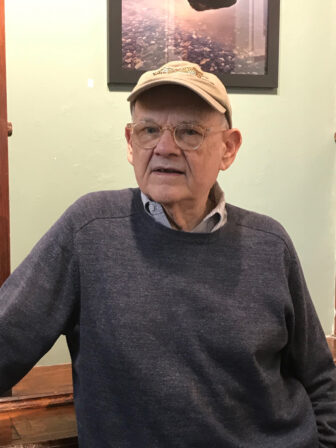 The New York City you moved to as a young man must feel like a galaxy far, far, away…

I grew up on Long Island, and when I got out of college, the last thing I wanted was a commute on the Long Island Railroad. The first apartment in Manhattan I saw was in Murray Hill — a one-bedroom in a beautiful old building. It even had a fireplace. The rent was $185 a month. I had started a job at CBS. Back then, you started in the mail room if you were interested in administration, or as a page if you wanted to work in production. I wasn’t making much money. I will not tell you how little. Anyway, while I spent 15 minutes debating whether to rent the apartment, someone else took it. The second apartment I looked at was at 11 W. 69th St. It had five rooms and it cost $216.11, rent-controlled. I had learned my lesson and I took it immediately.

This was around 1965 and the Upper West Side was not a desirable place to live. All that changed when Lincoln Center was built and restaurants opened. It became a different world.

Did you study anything related to television in college?

No, I majored in history and minored in English. I wanted to become a history teacher. I was hanging out that summer after graduation and one day met up with a friend in Central Park. He had landed a job in the mail room at CBS and told me to apply. I filled out a form and that’s all it took. I was in the mail room at their production center on West 57th, but only for a month. Because TV was expanding at that time, I had five jobs over the next eight years, all in administration.

How did you shift to production?

One day, while on a lunch break, I went into one of the rehearsal halls. The Carol Burnett Show was filming, and I had my nose pressed against the window. Carol Burnett saw me, came to the door, opened it and asked, “Do you wanna come in?” I said, “Sure.” I watched them rehearse and decided that administration was not for me; I became an assistant producer.

What did you do?

I handled the logistical aspects of a production: putting together the crew, finding the studio, etc. I moved up to associate producer and then producer. It all began purely by accident, through Carol Burnett. I’m a great believer in luck: knowing the right people, being in the right place, having some ability.

I was a producer until 1979, when I received an offer to become an associate producer for All My Children, which happened to film two blocks from my apartment. I was there for 20 years, until 1999, and was a consultant for them until the show went off the air [in 2011]. It had 250 people connected with it: stagehands, prop people, scenic artists. It was like a rep company: 35 actors, plus contract players who were on three days a week. One thing I loved was that Agnes Nixon, the head writer, was a progressive activist. She believed in telling stories — about AIDS, breast cancer, crime in prisons — that affected and hopefully improved people’s lives.

Do you think your career trajectory is still possible?

No. Those opportunities no longer exist. At the time, there were only three networks with no competition from livestreams, cable, etc. CBS believed strongly in the apprentice system: you started in the mail room or as a page, became familiar with how the company worked and where it was going, and you were given the opportunity to decide where you wanted to go within it. Today, the networks are shadows of themselves. The world changed, and people’s interests and attitudes changed. Also, even with a small salary, you could afford an apartment in Manhattan. We lived in the golden years, when almost anything was possible. But, of course, it was not possible for all; we know that now.

Where do you keep your Emmys?
In my living room — they’re just kind of there. I know people who keep them in the kitchen or bathroom, and that’s disrespectful. I’ve won two, both as a supervising producer. A friend told me, “Now when you die, your obit will say ‘Emmy Award-winning producer.’ ” I feel fortunate I got to work with incredibly talented people. Someone else asked me, “How have you lasted so long?” But longevity isn’t a given and I have no real answer for it. It’s important to love what you do, and I loved it.

How did you wind up in Beacon?
When I was at All My Children, there were two producers, and we alternated daily. The day after you produced a show, you’d go into the editing room and put it together. It was a 12- to 16-hour day. I needed a weekend place where I could be mellow. Friends had a wonderful house in Kent, and one weekend I looked around and found an 1844 Cape that I bought and lived in for about 10 years. Eventually, it became a little difficult to maintain. I knew Beacon, had been there many times. I wanted a place where I didn’t have to drive two miles to get a quart of milk, and Beacon is an eminently walkable city. I moved here in 2007, and on the first day I took a walk down Main Street and counted 26 empty storefronts. Considering where Beacon is today, it’s kind of amazing.

How did the Howland Cultural Center rope you in?
About 10 years ago, when I was sitting on a bench outside the HCC, Florence [Northcutt, a longtime board member] came by with her boxer, Major, whom I’d pet. I had never been inside, and I decided to go in. It was a “Wow!” experience — that a city like Beacon has a building like this is incredible. There is an energy about the building I find extraordinary. The HCC is my second love affair, after All My Children. I think I’ve been helpful in raising its visibility. Until the pandemic hit, every Saturday and Sunday in 2020 we were booked with classical and popular music, book signings, dance. Hopefully, with COVID-19 receding, we can get back to it.