The title of this column was going to be “Teaching Racism”—because I had been telling my kids how traditionally certain people think about other certain people, and I was planting those seeds, and it made me so sad — but I figured nobody might read a column with that headline. I am also struggling with what to focus on as May closes Mental Health Month and turns into June Pride Month. 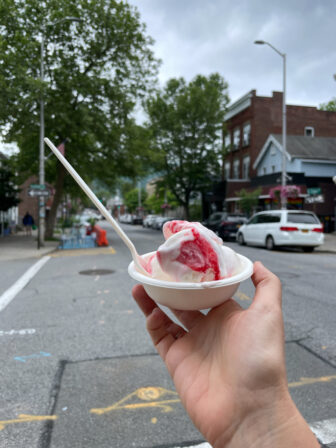 Strawberry swirl ice cream was enjoyed on the sidewalk where The Accident, as Beaconites refer to it, took place. (Photo by K. Martin)

I’m a pretty chirpy person. My husband says he married me because I am “bubbly,” so when I’m not so bubbly, or bubbly with an edge, it can throw off an equilibrium. My daughter has been called my Mini Me, and if you see her, she looks quite … perfectly happy. But she always likes to play the strongest witch in a battle with a billowing cape. She recently lamented to a stylishly edgy friend from Cold Spring when she said: “I don’t look like how I feel.”

The first event to throw me off was the one with the child hit by a car in Beacon while eating ice cream. On May 9, two cars hit each other in the middle of Main Street. One hit parked cars in front of the Howland Public Library and the other jumped the curb and hit a grandmother and pinned her grandson under its back tire. My children cross the street, and they use the sidewalks, and visions of cars hitting them keep appearing as we walk together.

Next was the wild awakening of the decadeslong occupation of Palestine by Israel. If I thought writing about Black and white racial issues was hard, this proved to be a whole new world of hard. In childhood, I was aware of how my Arab friends navigated the American world; my family’s first instincts after 9/11 were to protect them from Islamophobic thinking. Last month, as buildings in Gaza fell and we watched videos of children being shot or pulled from bombed buildings, my own children asked me what was wrong. What was going on?

Weeks later, I had my daughter talk to my Muslim friend about Ramadan, the monthlong observance. She has school friends who were fasting but I wanted her to learn about the charitable opportunities they seek — the parts she can’t see beyond fasting — so that she could learn the depth and appreciate the actions.

Just like when my children first learned about the reason behind Martin Luther King Jr. Day, how he had been shot and killed and why, I felt the pang of: “Why do they need to learn this? Can’t we all just live blind? And love each other from scratch? Clean slate?”

We can’t. Because that disappears people. Sadly, in order to make massacres such as what occurred in Tulsa, Oklahoma, a century ago this month appear in white education, it requires a lot of people to be “anti-racist” and buck the norms of comfortable — what I call Cotton Candy Racism.

Cotton Candy Racism is when we absorb racist, misogynist and classist stereotyping in new episodic Netflix and old movies (like, from the 1980s and 1990s). We eat that sugar so easily. When someone threatens to take it away by, say, changing school curriculums, we get upset. The New York Post had a story about an extreme case: a father who was in such withdrawal of his sugar fix that after discovering his 9-year-old daughter was learning “anti-racism” at her private school, he moved the family to Florida.

Thank goodness I don’t like cotton candy. I do indulge in cookie dough. But May had been a lot. I encourage us to put down the sugar, pick up a vegetable and figure this out.