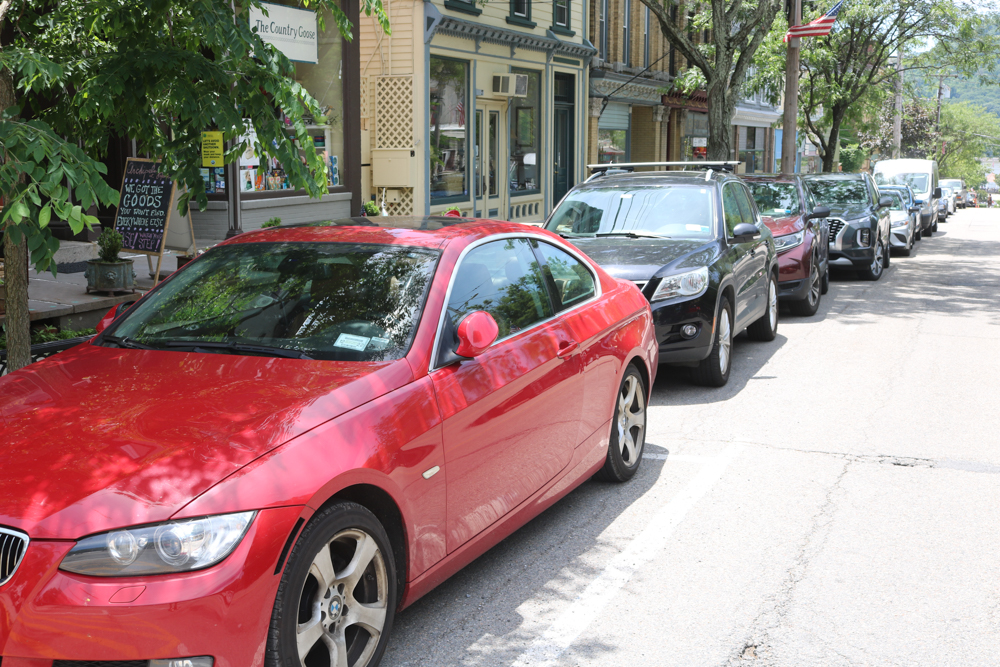 The Cold Spring Parking Committee on June 3 unveiled its proposed strategies for addressing a chronic shortage of spaces on and near Main Street, a problem that has become increasingly evident during the tourist season.

Key elements of the plan include residential parking permits, “virtual” metered parking and areas of free and reserved parking.

The strategy was outlined by Jack Goldstein, who is part of the six-member Parking Committee, at a Zoom meeting attended by more than 70 residents. Other committee members include Mayor Dave Merandy, Trustee Marie Early and residents Rebeca Ramirez, Evan Hudson and Dan Valentine.

The proposal, which must be approved by the Village Board, calls for a Residential Parking Permit district that includes 11 streets east of the railroad tracks and west of Morris Avenue, including Stone, Cross, Railroad, Garden, Church, High, Furnace, Rock, Haldane, Kemble and Northern.

Permits would cost $10 annually and be in effect daily from 10 a.m. to 5 p.m. Residents with off-street parking would be eligible for one permit and those without for two.

A residential permit program was approved by New York State in 2015 but never implemented. (Main Street, zoned for business, was not included.) The area west of the railroad tracks has had permits since 2003.

Virtual metered parking would be implemented on Main Street from the traffic light to Depot Square on weekends and holidays from 10 a.m. to 5 p.m. at a rate of $2.50 per hour with a three-hour maximum. A small number of spaces would be metered on cross streets close to Main, as well as on a short section of Northern.

Metered parking was also proposed for the municipal lot on Fair Street and at Mayor’s Park, with rates from $1.25 to $3 per hour, depending on the day and time. No time limit would be enforced. A proposal for metered parking at the ball fields on Route 9D (Morris Avenue) in cooperation with the Haldane school district was shelved.

Parking fees would be paid through a phone app created by ParkMobile or through a toll-free number. Cold Spring police officers would issue tickets.

Free parking for visitors and workers in the village would be available at Depot Square, Metro-North, The Boulevard and Kemble Avenue. Part of the Highway Department lot is also being considered. Free spaces would likely also be occupied by visitors who can’t use the virtual parking system; by one estimate, as many as 30 percent of Americans don’t have a credit card.

The Parking Committee began meeting weekly in March with a goal to “reduce parking hassles” while increasing tourism-related revenue and reducing pollution.

While a number of residents at the Zoom meeting thanked the committee for working on what they acknowledged is a complex issue, some expressed their displeasure.

Kaitlin Louvier, who works in a Main Street shop, complained that the proposal would “punish hourly employees” who will either have to pay for weekend parking or walk from more remote, free areas.

“There will be inconveniences for some of us,” Goldstein responded. “But we’re trying to reduce them to an absolute minimum.”

Bo Bell said he and others who live on Main Street were not considered in the plan, which would force them to choose between walking from free areas, paying or risking tickets.

“I ask that you delay the entire program until you can make a more equitable and fairer program for all residents rather than just for those who live on the 11 streets,” Bell said. “Or that you implement only the meters or only the Residential Parking Program.”

Parking has been a concern in central Cold Spring for many years, but the striking increase in visitors arriving by car in the past decade, most markedly during the COVID-19 pandemic, has created a chaotic situation on weekends.

Traffic jams, idling vehicles and a constant procession of vehicles circling in search of spaces have left drivers frustrated and angry and led to occasional altercations. Residents complain that the chaos has diminished their quality of life.

“No matter what is adopted by the Village Board, there will have to be a testing period,” Goldstein said. “We won’t know how effective our recommendations are until they are put to the test for a reasonable period of time.”

Early said the committee hopes to receive more feedback. It heard comments on June 3 and has scheduled another forum for June 24. After the Parking Committee submits its recommendations, the Village Board also must hold a public hearing.

■ Village Accountant Michelle Ascolillo reported that the property tax rate remained flat for 2021-22, decreasing by .003 per $1,000 of assessed value. Taxes are due June 30 without penalty.

■ The Cold Spring Police Department responded to 47 calls for service in May and issued 13 traffic and 53 parking tickets. There were no arrests. The fire company responded to 13 calls, including a mountain rescue at Breakneck Ridge and two elevator rescues at the Metro-North platform.

■ The highway department collected 48.5 tons of garbage and 19.77 tons of recyclables.