Although Mayor Lee Kyriacou last year proclaimed June as Pride Month, the LGBTQ (Lesbian-Gay-Bi-Trans-Queer) community in Beacon has been advocating for itself since long before a formal declaration.

Nowhere is that more evident than on Main Street, where Pride flags and stickers appear in the windows of many businesses. Aimee deSimone, who owns Berte, a home and handmade goods retailer, highlights the work of LGBTQ artists, makers and products. At the Blend Smoothie Bar, Emily Dolan adds a colorful fruit-filled Pride Bowl to the menu each June. 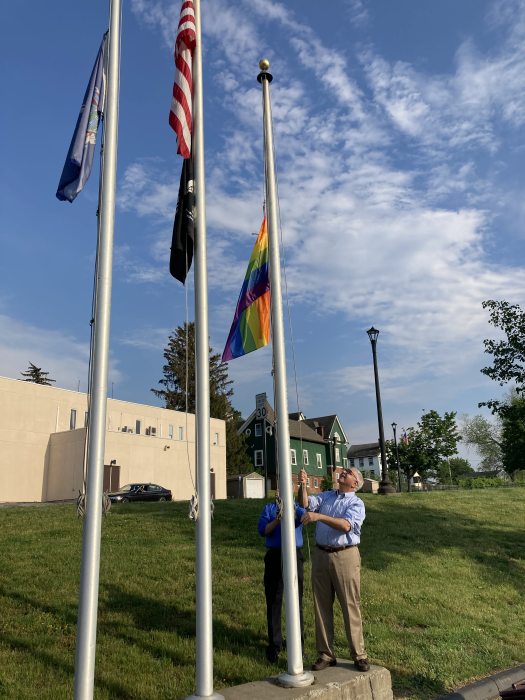 But what Beacon has lacked, say activists, is an organized effort to promote LGBTQ residents as a vital part of the community. This year, Donna Minkowitz, Petra Aldrich and Kk Naimool have put together the city’s first Liberation March, scheduled to begin at noon at Memorial Park on Saturday (June 12) and sparked in part by an anti-gay letter-writing campaign by Dick Murphy, a former Dutchess County legislator.

Minkowitz said she hopes the march will send a message that even in a politically progressive city such as Beacon, homophobia still exists. The march will also amplify the need for organized advocacy, she said.

“The efforts Beacon’s local businesses have made to show support are absolutely essential for positive change, but they aren’t enough,” said Minkowitz, who is a writer. “At the end of the day, liberation is about us. It’s up to us.”

Laura and Samantha Abby, a married couple who own The Studio, a boxing and cycling gym, promote Pride Month each year by offering Pride-themed classes. But Laura Abby noted that they have “never been part of a real coordinated effort to observe Pride in Beacon, even though each year it feels like Beacon makes a little more progress in celebrating its queer community.”

There is only so much business owners can do on their own, she said. “We love raising money every year for LGBTQ centers in surrounding towns, but I would love for us to be able to put the money toward things in Beacon.”

The Abbys have two young children and “would love to find family friendly ways to connect our kids with other families in the queer community,” Laura said. “I’m always saying to people, ‘How can I get more involved?’ or ‘Who do I talk to?’ And the response has been, ‘We don’t really know yet.’ If there’s something I’d like to see happen, I may have to be involved in creating it.”

Dolan, of Blend, said that Beacon residents can do more, such as “advocating for more gender-neutral bathrooms, helping out the LGBTQ centers [in surrounding municipalities] to create more educational events and bring together the LGBTQ community within Beacon.”

Joe Waring moved to Beacon five years ago after hearing how progressive the city was becoming. But, upon arrival, he noticed a disconnect between acceptance and what he calls “activation.”

“There were Pride flags everywhere” in the city, he observed, “but there was no centralization for LGBTQ events or activities.”

On June 5, Putnam Pride held its second annual rally and march in coordination with Putnam for Black Lives. Drag queens Shay D’Pines and Angel Elektra led the crowd of 200 from the Historic Courthouse in Carmel to Gilead Presbyterian Church for music, entertainment and performances.

Waring knew from his own experience the value of an established LGBTQ community, especially for young adults, so he has worked to make connections for those people in Beacon.

“I talk to a lot of people who say they move here because of all the pride they see, but then they get here and think, ‘Where will I meet people?’ ” he said. “There are no gay or lesbian bars here, and in terms of where to go and who to talk to, a lot of people struggle. I made it my goal to bring people together.”

Waring approached Kyriacou in 2019 to ask about creating an LGBTQ advocacy board that would report to the City Council. Kyriacou asked him to join the city’s Human Relations Commission, which was renamed this year the Human Rights Commission.

Waring did, and has continued pushing on his own to foster an organized LGBTQ community, saying that “one of my biggest milestones was facilitating the flying of the Pride flag” at City Hall.

Waring has also created pop-up Pride events and used social media to connect the LGBTQ community, but, like the small-business owners, feels stunted by limitations in funding and formal leadership. “I’m a one-man show,” he said. “I do everything I can, but I really only work at a grassroots level.”