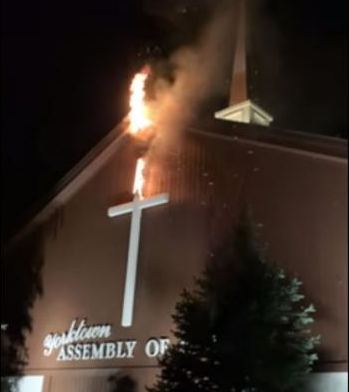 A fire broke out on May 30 at the Yorktown Assembly of God.

A Yorktown Heights church led by a former Philipstown pastor may have been saved from destruction by a neighbor’s barking dog.

Firefighters arrived at the Yorktown Assembly of God at 12:45 a.m. on May 30 to battle a blaze that started on the exterior of the building and reached the attic. A neighbor called 911 after being alerted to the flames by his German Shepherd. Officials said the fire appeared to be accidental.

The church is led by Don Foster, who was the associate pastor at the Philipstown Assembly of God from 1985 to 1990 before becoming senior pastor at Yorktown.