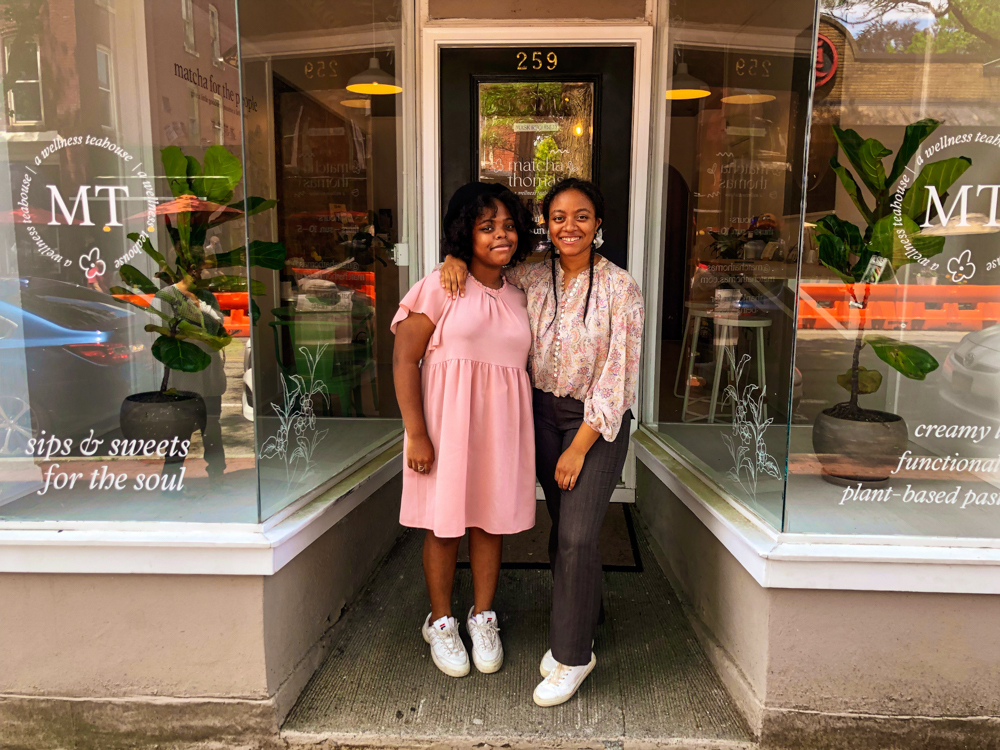 Nia Thomas, 16, and Haile Thomas, 20, stand in the entrance of Matcha Thomas in Beacon, which opened last month. (Photo by B. Cronin)

Matcha Thomas is a teahouse about more than tea

Matcha Thomas, the teahouse that opened last month in Beacon, is a distillation of Haile Thomas’ many years of activism and public speaking, her experience founding and running a nonprofit organization, and the recipes from her cookbook Living Lively, which was published two years ago by William Morrow.

“Food and being really creative with it has always been a core part of our family in general,” she explained while sitting with her sister, Nia, 16, who has been her co-star in instructional cooking videos aimed at children, and who helped her develop the vegan recipes for Matcha Thomas’ brownies, cookies and other sweets.

But for the first years of their lives, eating healthy was not part of the equation. While they credit their immigrant Jamaican parents for instilling in them a love of creative food, when they were growing up the family philosophy was, as Haile puts it: “This tastes good, so we’re going to eat it.”

Then, when Haile was 8 and Nia was 4, their father Hugh was diagnosed with Type 2 diabetes. The possible side effects from the medicine Hugh was prescribed, including internal bleeding and diarrhea, sounded like they would be worse than the disease.

After their mother, Charmaine, read that Type 2 diabetes could be treated through dietary changes, the four of them made a commitment to rework the family’s diet. The sisters played a big role, helping to remix and change the recipes the family had been cooking with, while incorporating more plants and reducing red meat. Within a year, the family had reversed Hugh’s diabetes without ever having to use medication.

“It was so eye-opening to see the power of food,” said Haile. 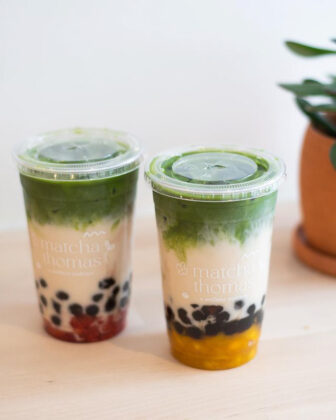 The strawberry and mango bobas from Matcha Thomas (Photo provided)

The sisters knew theirs wasn’t the only family dealing with health issues that could be addressed by a change in diet. They started a YouTube cooking channel aimed at teaching children and young adults to cook and founded a nonprofit, The HAPPY Organization (Healthy, Active, Positive, Purposeful Youth), which runs plant-based cooking and nutrition summer camps. Along the way, the family converted to veganism.

“That was the natural progression,” said Haile. “I started to learn that so much food is interconnected with so many different elements of our world, of course environmentally, but also ethically.”

The family discovered matcha, a Japanese green tea powder that’s high in antioxidants, a few years ago. Haile writes in her cookbook that she had become so obsessed that she started an Instagram account at @matchathomas, although there were no plans at the time to open a teahouse.

However, she was frustrated with the quality of the matcha being served at coffee chains. “Oftentimes it’s bitter or the color is super yellow-green,” she said. “Matcha is this super-vibrant bright green. It’s got such a mellow, delicious, umami flavor.”

Last year, when the Thomases, who live in Chester, were picking up food from Isamu in Beacon and noticed a for-rent sign across the street, they decided it was time to share what they’ve learned about matcha.

The sisters felt they were walking a fine line featuring an ingredient that comes from a culture other than theirs. “Nothing can compare to a traditional Japanese tea ceremony,” said Haile. “But what we want to do is offer this: Respecting the ingredient and its origins but also sharing the joy we’ve had with it.”

Everything the Thomas family has done since their father’s diagnosis 12 years ago has been about challenging the stereotype of the vegan as an affluent white person and making a healthy lifestyle accessible to all, Haile said.

“There are systemic barriers to eating fresh fruits and vegetables and having that readily available,” she said. “At the same time, it’s not impossible. A lot of Indigenous cultures around the world have always embraced plant-based living.”

One wall at the Main Street shop has “Matcha for the People” painted on it. With a nod to Lagusta’s Commissary in New Paltz, patrons at Matcha Thomas can purchase a drink or a sweet for someone they don’t know and post it on the wall with a message such as “A boba tea for a student struggling with finals,” or “A matcha latte for a single parent.”

“We were thinking, ‘How can humans see each other and remind each other that they are worthy, loved, or accepted or even just acknowledged?’” said Haile. “It’s such a simple way to put a few dollars toward someone having a better day.”

The teahouse has been busy since the day it opened, but Charmaine believes the best sign of its success can be found on the street. “People come in and say, ‘I want that drink I see everyone on Main Street with,’”  she said.