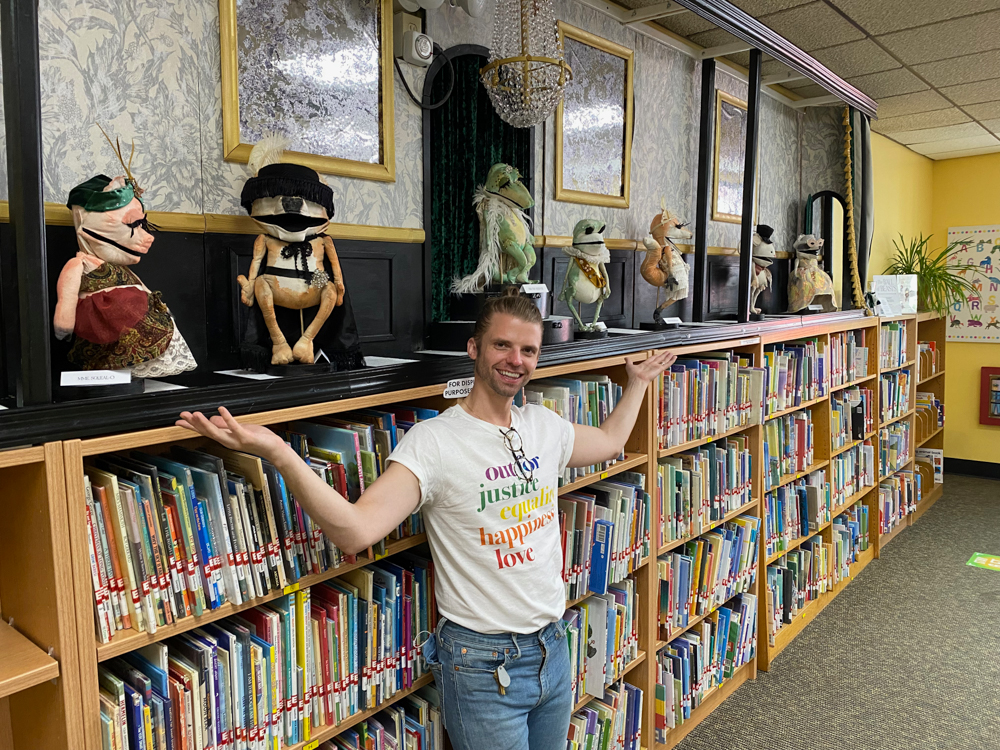 Adam Izen with his puppets at the Howland Library (Photos provided)

Years ago, Adam Izen created two 6-foot-tall ostriches and mounted them on the wall of his Brooklyn living room.

About the time of the start of the pandemic shutdown, Izen and his husband, Tyler Bush, a creative director at a design firm, moved to Beacon. This past March, Izen says, he fell into a funk from the isolation. “We were here for nearly a year, and we weren’t making any connections to people,” he says. “Tyler pushed me back to creating the creatures. I wanted to put a collection together.”

Looking for a place to mount an exhibit, he reached out to Ginny Figlia, the youth services librarian at the Howland Public Library, who told him that the summer reading theme happened to be Tails and Tales.

Izen, a branding professional who describes himself as a “soft-sculpture artist and creator of haute couture creatures living in fairy tale worlds,” populated the bookshelves in the children’s room with puppets such as the Duchess of Raconia, Squeakertins and Miss Fiona LeFoxxé, all dressed to the nines, for Ball of Beasts: A Fantastical Fest. On the occasions that Izen has stopped by, he says parents seem to be as taken with the sculptures as the kids.

To develop his puppets, Izen says he starts by creating a list of animals “that, for me, feel storybook-like.” He builds with fabric, initially, rather than foam, which he admits is challenging because it doesn’t hold its shape as well. Then he adds costumes and accessories to give each puppet personality.

Throughout the process, he says that “the animal guides me, telling me to go for a more graphic shape, or simplify. It’s a conversation I’m having with them. Some challenge me until I have a ‘That’s who you are!’ moment.”

Izen grew up in Texas. “I have two older sisters and when I was 4 or 5, one of them had to create a diorama of James and the Giant Peach for school,” he recalls. “I threw a fit and wanted to make my own. In my spare time I used to make Sculpey clay creations, which got more and more elaborate. I still laugh at how I want to have kids so that I can do those elaborate, unnecessary school projects.”

By middle school, Izen had taught himself to construct puppets and to sew. In high school, he launched a business to make them for puppeteers around the world, all the while pursuing musical theater. But he decided, at Emerson College, that he was more interested in “developing and executing ideas,” particularly in costume design, noting he was fascinated by what people wore and why they were wearing it.

After graduating, and spending six months teaching English in Prague, Izen moved to New York City but found he wasn’t interested in “being a starving performer; I was a little lost.” He landed a job working for a menswear trade show, which he helped rebrand. “I found that having daily tasks and regular paychecks satisfied the Capricorn side of me,” he recalls. “I fell into it, and it became this niche which developed whether I liked it or not.” More recently, Izen became a brand director for a fine arts and furniture design gallery.

He and Bush have, over the past couple of months, finally made connections in their new home, Izen says. “It’s kind of impossible to go anywhere here and not connect,” he says. “Having this opportunity at the library, plus other involvements I’ve had with some freelance floral design, and at the Makers’ Market — people want to talk with you. I’ve been happy to see how easy it is, masks off.”

The Howland Public Library is located at 313 Main St. in Beacon. Ball of Beasts can be seen daily through Sept. 3; visit beaconlibrary.org for library hours. For more of Izen’s work, see adamizen.com.