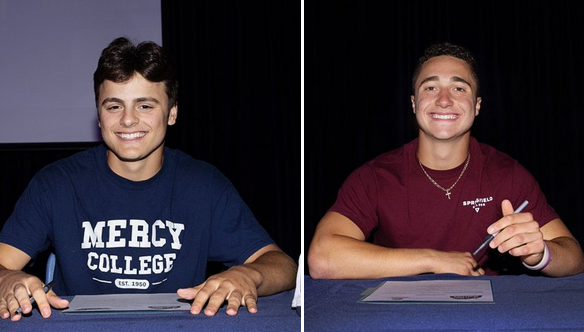 Beacon’s team for players age 14 and younger, which is managed by Beacon High School varsity coach Bob Atwell, got off to a strong start in the Greater Hudson Valley Baseball League, winning its first three games.

The team is led by Mike Fontaine, who will be a sophomore at Beacon High School in the fall, along with players mostly from the JV squad, including Nick Albra, Liam Murphy, Derrick Heaton, Ronnie Anzovino, Jackson Atwell, Jack Antalek, Mercer Jordan, Ryan Smith, Anthony Borromeo and Austin Jorgensen.

“They’ve been playing together for some time now,” Atwell said. “It’s a tight-knit group.” He said his pitchers, who include Fontaine, Heaton, Murphy and Jorgensen, have been throwing well. “The strikeout-to-walk ratio has been great.”

Heaton, Fontaine and Atwell have been sparking the offense, Atwell said, also praising Jordan for his walk-off double to beat Orange County.

The Bulldogs are scheduled to play 12 games, along with playoffs, and take part in several tournaments. Their next league games are at Memorial Park at 5:30 p.m. on Monday (July 5) and Tuesday.

A Philipstown All-Star team of players ages 10 and younger finished pool play in the District 17 tournament with a 1-2 record.

After falling to the Town of Wappinger in its first game, 11-0, on June 25, the team won a thriller on Sunday (June 27) over Pleasant Valley when Harry McGrory scored the game-winner by stealing home on a wild pitch with two outs and two strikes on the batter in the bottom of the final inning.

Philipstown was powered by a home run from Lughan McIlwaine and strong pitching by Theo Swan, Brian Rommel and Oliver Herman.

On Tuesday, Philipstown finished its pool play with a loss to LaGrange.

The Philipstown team, coached by Dan Valentine, BJ LeMon and Ben Drew, was scheduled to face Pleasant Valley in a best-of-three series starting Thursday (July 1) at the fields at the North Highlands Fire Department. The second game is scheduled for Tuesday (July 6) at Pleasant Valley, and a third game, if necessary, for Thursday (July 8) with the location to be determined by coin toss.