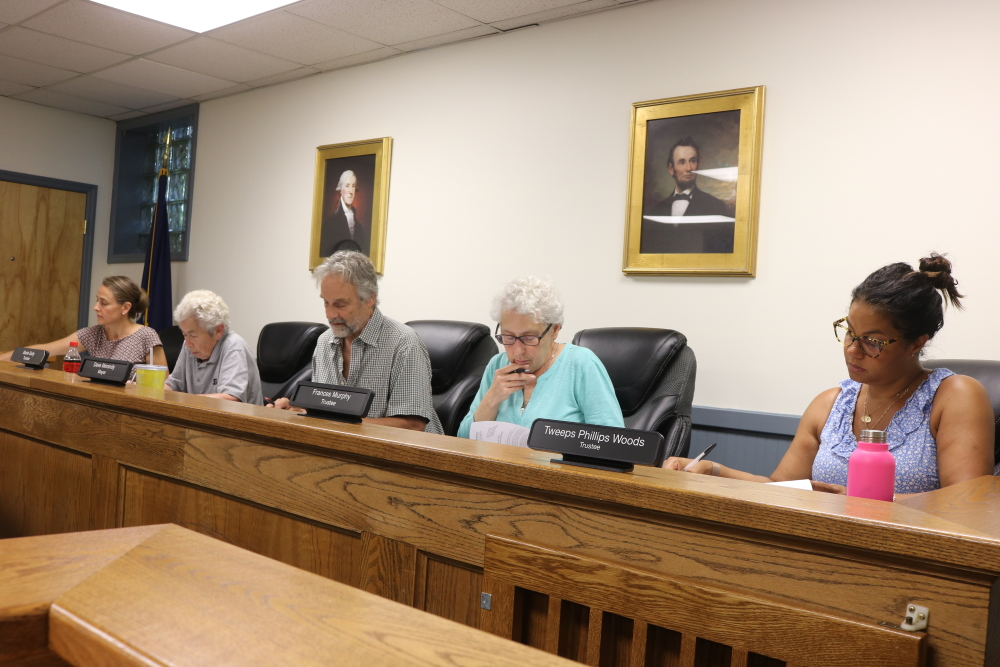 The Cold Spring Village Board met in person on June 24 for the first time in more than a year. (Photo by M. Turton)

The committee working to ease Cold Spring’s parking problems presented a revised plan at a public meeting on June 24 after considering feedback on a draft strategy released in early June. Predictably, some residents praised the amended plan while others were less satisfied.

The need to better manage parking has become acute in recent years as weekend visitors increase, even during the COVID-19 pandemic.

“Overloading the village with traffic in a disorganized way will continue to seriously erode quality of life for everyone who lives here,” said Jack Goldstein, a committee member, in explaining the rationale behind the revised plan. He said it provides “first steps that will actually do something about the problem” and added that “the time for punting on this issue is over. There are events being planned this summer that may attract 2,000 people each.”

The major components of the plan remain intact: metered parking on Main Street from Route 9D to Depot Square, in the municipal lot on Fair Street and at Mayor’s Park; a Resident Parking Permit (RPP) district encompassing 11 streets in the village core; free parking areas; and areas allocated for business owners and their employees.

The biggest change is the elimination of paid parking proposed for several side streets where they intersect Main Street. That will increase the number of free parking spaces within the RPP district from 49 to 81. The village will also provide a number of “floating permits” for service-worker vehicles.

Some attendees at a public meeting on June 3 complained that Main Street interests were not adequately addressed in the initial plan, and Goldstein said he hopes that the 60 percent increase in free spaces will improve parking for those residents and employees on weekends and holidays, the only time metered parking will be in effect under the plan.

“It probably won’t solve every individual problem, but the committee feels it is a significant improvement,” he said.

The west side of Kemble Avenue south of Rock Street will not be reserved for business owners and their employees as originally proposed. “There didn’t seem to be much enthusiasm” for that, Goldstein said. Instead, Kemble will be a free parking area open to anyone.

Trustee Marie Early, who is a member of the committee, said after the meeting that The Boulevard is being considered for reserved parking for those living or working on Main Street.

The plan still includes the use by the village of a smartphone application from Parkmobile to collect fees on weekends and holidays.

Goldstein stressed the flexibility of the app. “If metering is seen to be unnecessary in the offseason, it can simply be turned off,” he said. “It will take a test period to see if we are offering parking at market rates, at the right times of day and year and what revenue is.”

He said the only cost to the village is a credit card fee on each payment; Parkmobile charges parkers 35 cents for each transaction and will provide signage and analytics.

“I’m impressed; every time you guys have come back you’ve made [the plan] better and better,” said Eliza Starbuck, who is president of the Cold Spring Area Chamber of Commerce and a candidate for village trustee, but commented only as a resident of Main Street. She said eliminating paid parking on side streets addressed her biggest concern.

Others were not as accepting. Jim Smith lives on Main Street between Church and Route 9D, an area zoned residential but not included in the 2015 RPP district, making residents ineligible for permits. Smith was one of 25 residents who have petitioned the village to exclude that section of Main from metered parking.

Goldstein said exclusion of that section of Main from the 2015 RPP may have been an oversight. He noted some of the residents who signed the petition have off-street parking and urged the use of the additional free spaces in the revised plan.

Travis Fyfe, who lives on Stone Street, said he was concerned that the plan doesn’t give Main Street renters access to parking equal to those in residential areas. He called it “mind-boggling” that the lower village has different rules than the upper village.

(New York State approved parking permits on streets west of the railroad tracks in 2003. Like the 2015 RPP, that arrangement reserves a maximum of 80 percent of spaces for residents but, unlike the RPP, does not designate specific areas or require a permit to park adjacent to businesses.)

Fyfe’s other concerns included a reduction in parking reserved for firefighters near the firehouse, the accuracy of space measurements and allowing parking on both sides of Northern Avenue between High and Church streets, a section he thought too narrow.

He also questioned if fines for violations are sufficient, noting that a $40 ticket is not cost-prohibitive for visitors from New York City.

High Street resident Andrea Connor urged the committee to recommend that Haldane Street be made one-way from High Street to Route 9D, saying drivers routinely ignore the stop sign at High. “It’s a terrible accident waiting to happen,” she said. The plan designates Haldane Street as an open, free parking area. The committee has agreed it should be made one-way but has not yet recommended in which direction.

The committee will now evaluate recent public comments before submitting its recommendations to the Village Board. It will be up to the board to accept, revise or reject the plan following a public hearing on July 14.