Loaves will return on July 10

From house to house in Philipstown and beyond, the word has spread, a communication like its namesake: Signal Fire is back.

Those bread lovers going through a protracted withdrawal since Signal Fire halted baking in December can again savor the wood-fired loaves, which will be baked at a new Peekskill oven and retail store. Co-owners Erin Detrick and Liz Rauch plan to make their re-appearance at the July 10 Cold Spring Farmers Market,

The saga of Signal Fire is fable-like, and began as a tale of two bakers who kept hearing from others that they should meet. 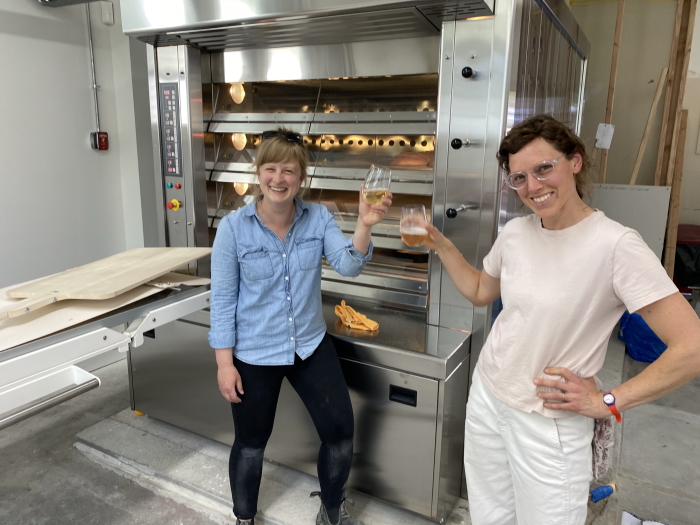 Rauch started as a hobby bread maker after taking a class in her then-home of Brooklyn. “I made two loaves, gave one to a neighbor and experienced the joy you get when you give something to someone who’s excited by it,” she recalls.

After relocating to Garrison, she started a bread share through Long Haul Farm. “We had eight people the first year, more the second, and then Chris Pascarella at Marbled Meats talked me into scaling up. I was baking 30 to 35 loaves at a time, and then my second baby came along and I couldn’t keep up that pace.”

Rauch directed her customers to Detrick. The two finally met, and, not long after that, Detrick was offered an opportunity to use the facilities — including a wood-fired oven — at Sparrowbush Bakery, near Hudson. She did one baking cycle each week and sold the loaves at the Saturday farmers market.

Often, the bread — almost all of which is naturally-leavened sourdough with grains stone-milled in Columbia County and flour from the Finger Lakes — sold out.

Then, Detrick became pregnant, and Rauch stepped in to help with the baking. With that, a partnership was born. “In addition to sharing each other’s work, we learned how to work a fire,” Rauch says.

Detrick adds that Rauch kept the business alive during the pandemic and “kept it in balance with our lives. It’s important to both of us to keep our growth in check, as employees, humans, moms.”

The rigors of baking in Hudson and managing families became too much, however, and at the end of 2020 they called it quits. “There was an aspect of sharing the space which meant it was out of our control a bit: the schedule, how much bread we could make,” Rauch says. “I wanted autonomy.” 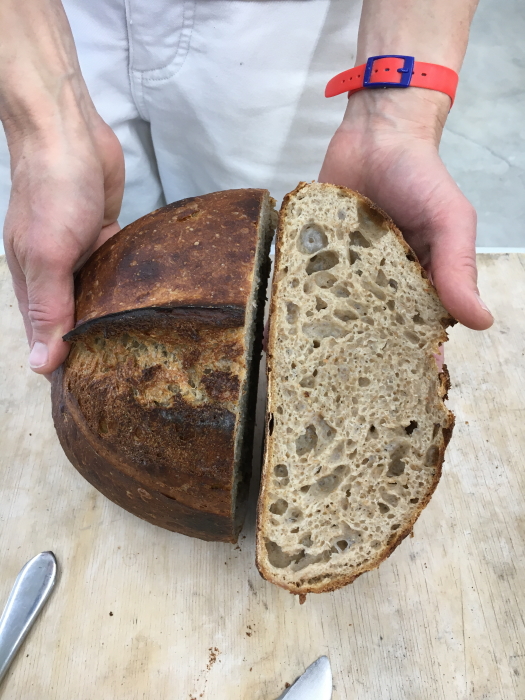 The in and out of a Signal Fire loaf. (Photo provided)

Finding a closer place to bake initially proved impossible, but once they stopped baking and focused on the search, Rauch and Detrick quickly discovered a former black box theater on North Division Street in Peekskill that “had this good feel,” Detrick says.

Still, there was costly work to be done, including installing a $65,000 oven. “From the beginning, Signal Fire’s biggest hurdle was the huge amount of capital needed for infrastructure costs,” Detrick says. “We couldn’t see a way for it to thrive without community support for the oven.”

“We had to trust that our customers wouldn’t forget us,” adds Rauch.

A humble fundraising campaign by email brought in $26,000, enough to get started.

“We can’t reiterate enough how grateful we are for this support and the confidence and cheering-on from our community,” Rauch says.

Detrick agrees: “It could have been a scary and lonely thing, and that hasn’t happened. Bread appeals to everyone. The industrialization of bread moved us away from that for a century; we’re changing that — doing something that people long for. The kind of bakery we’re opening taps into a through line of community bakeries.”

Along with returning to the Cold Spring market, Signal Fire will be selling bread from its Peekskill space at 706 N. Division St. and taking orders through Marbled Meats in Philipstown. See signalfirebread.com. Loaves range from $7 to $20.