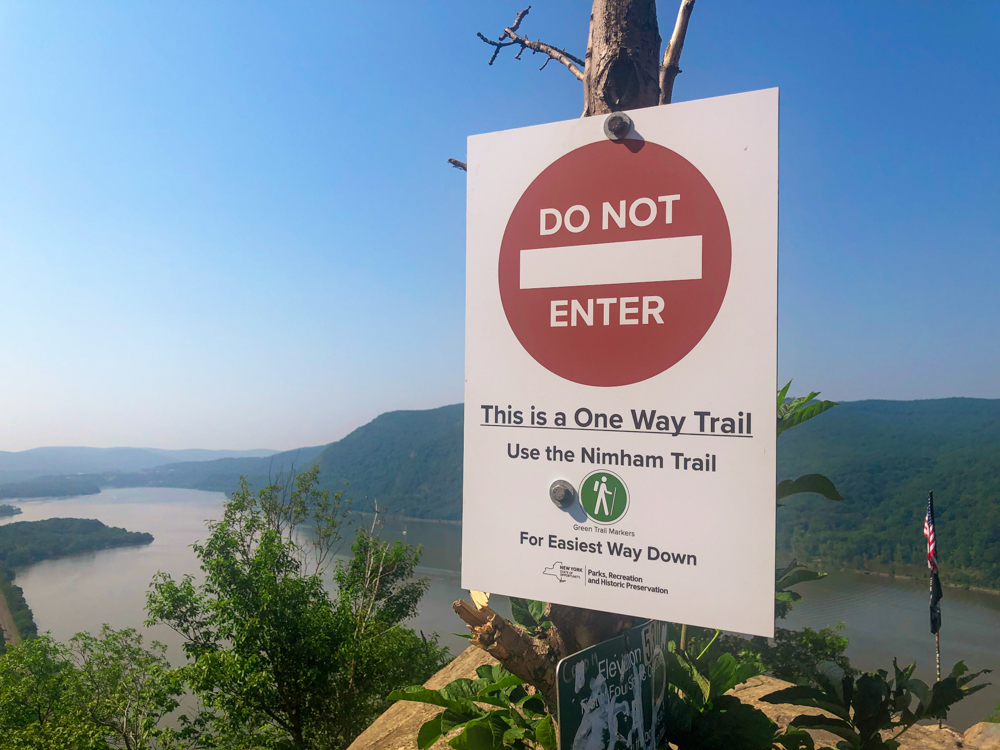 A new sign at Breakneck's first summit discourages backtracking (Photos by B. Cronin)

Hiking Breakneck Ridge just got safer and easier for those who seek to tackle the popular trail and quickly find themselves in over their heads. Officials last week cut the ribbon on the new green-blazed Nimham Trail, a half-mile path that starts at the first summit of Breakneck and leads back down the mountain to Route 9D.

“This trail will help reduce congestion that we see on Breakneck, and it will give people a safer way to head down,” said New York State Parks Commissioner Erik Kulleseid, who grew up in Philipstown.

The Nimham Trail is the first project completed by the Hudson Highlands Fjord Trail group, an organization operating as part of Scenic Hudson and spearheading the construction of a new multi-use trail connecting Beacon to Cold Spring. The project’s next phase, the Breakneck Connector, will allow for more parking at Breakneck Ridge while eliminating the need for hikers to walk alongside or across Route 9D, and through the tunnel. That phase is scheduled to be completed by next year, while the entire trail is scheduled to be done by 2027.

The Nimham Trail was created in response to the large number of hikers who, upon scaling the trail’s first section, have second thoughts and retreat back down the vertical face, injuring themselves and causing congestion. The new path also is a response to those who become lost after seeking to create their own way down by blindly heading into the woods. The new trail will allow hikers to bail out and head down stone steps, a smooth dirt path and a wooden bridge to return to Route 9D. It will also give first responders a much quicker way up and down Breakneck in order to attend to emergencies. The new loop takes about an hour to complete.

The trail was named in honor of Sachem Daniel Nimham, a Fishkill native and the final leader of the Wappinger tribe who died in the Revolutionary War fighting on the side of the colonists. Breakneck Ridge, like Bannerman’s Castle, lies within the town limits of Fishkill. Nimham, who was friends with Beacon’s Madame Brett and supposedly learned English from her and her family, fought to preserve Native American land rights in court, even travelling once to London in order to do so. He will be honored again with a new statue that will be erected within the Town of Fishkill later this year.

“Having a trail and a statue in our town to honor Chief Nimham shows our commitment to our history and to honoring those worthy of our respect and admiration.” said Fishkill Town Board Member Kenya Gadsden.