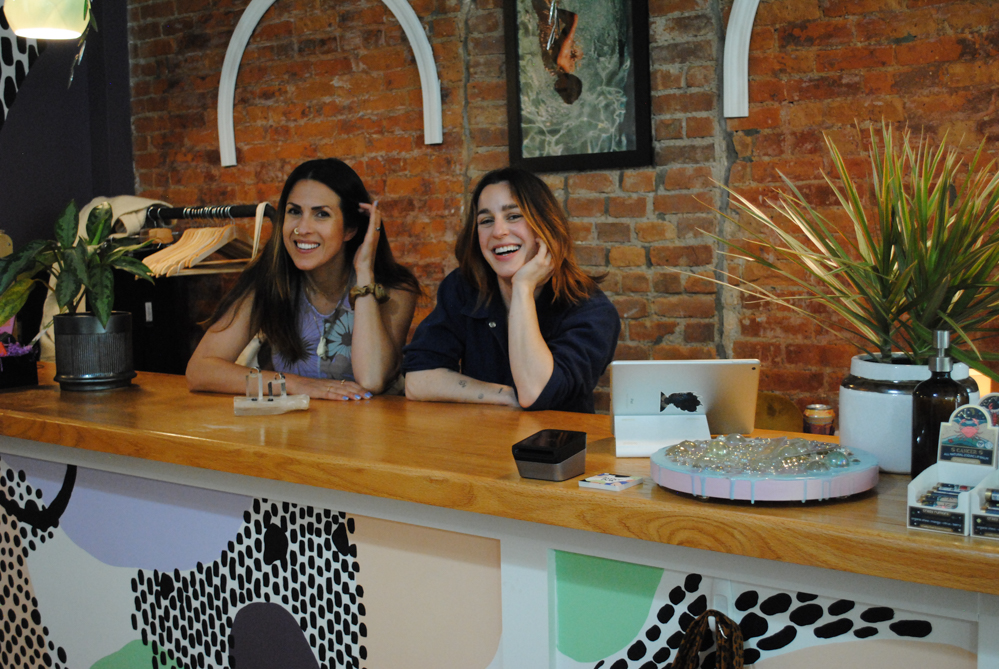 Andrea Podob and Carolyn Baccaro, the owners of hyperbole, an eclectic retail shop on Beacon’s Main Street, were perfect strangers when each moved to the city in 2018. Both women, however, arrived in town with a zeal for entrepreneurship and a mission to open their own retail store.

The following spring, Podob opened her shop, Wares, on Tioronda Avenue and just a month later, Baccaro opened Artifact Beacon on East Main Street. Catering to a similar clientele, and just a short walk apart, the two became familiar with each other’s storefronts right away.

“Andrea’s store featured more clothing and fashion, and mine was more focused on art,” Baccaro recalls.

“We hadn’t officially met yet and, sure, we were competitors, but I just remember how much I loved her stuff!” said Podob.

Though they chose to highlight different products in their stores, both shared a mission to carry products from local artists and makers, with a focus on sustainability.

“Since our stores and missions kind of complemented each other in that way, we definitely started to notice an overlap in our customer base,” said Baccaro.

After running into each other a few times and paying visits to each other’s shops, the two began discussing the challenges of running a store alone, as well as their shared dream of a centrally located space on Main Street — something neither could afford individually.

Baccaro recounts that “those conversations kept happening as we got to know each other.”

As they shared trials as budding shop owners, the two became friends, and the progression to business partners happened naturally and “very quickly,” said Podob. “It just clicked one day. We were competitors, but instead of fighting it out, we thought, ‘Why don’t we just do this together?’ ”

So, in October 2019, only a handful of months after Wares and Artifact had opened, both women closed up shop and together sought a new space on Main Street. The hardest part, according to the women, was coming up with a name for their store. They spent weeks trying to combine the names of their old stores.

“One day we thought, what is a word that means the best store ever, with the best products ever?” said Baccaro, “and we chose hyperbole!”

But the transition from competitors to friends to business partners brought challenges besides creating a name. Their combined shop, hyperbole (the lowercase “h” is deliberate), opened at 484 Main St. just months before the pandemic shutdown. It also coincided with Baccaro giving birth to her first child. The time became a testament to their bond as friends and their ability to weather challenges as entrepreneurs.

“I was so grateful for Andrea at that time,” said Baccaro. “Suddenly having to close our doors [due to the pandemic] and me starting a family, it was so hard for both of us in different ways. I’m so grateful to have had a partner through all of that.”

The two also dived into uncharted territory when, like most smaller retailers, they were forced to pivot to digital sales during the early months of the pandemic.

“It was pretty crazy to go all-digital, but it did allow us to build up that part of our business. We couldn’t have done that alone,” said Podob. “We had to work together in a new way, to reach customers that hadn’t ever walked into our store.”

As social distancing restrictions began to ease, the doors to hyperbole opened for good, hopefully, in March. That’s when the advantages of combining their efforts became most evident.

“We had so much customer overlap at Wares and Artifact,” said Podob, “and we noticed that so many people followed us here from the old stores.”

Another striking advantage is the unique shopper’s experience they have created at hyperbole. Since combining their passions of art and fashion, the duo can offer in-depth knowledge about all the products in their store.

Shopping for a piece of art? Baccaro has details about the local artists and can assist in picking out complementary pieces. With clothing, Podob can recount where she sources vintage pieces or the independent artisans that create the store’s jewelry.

“Curating the store was definitely the easiest part, and the most fun. We love focusing on the experience for our customers and introducing them to unique and locally sourced pieces,” said Baccaro.

It’s hard to pinpoint one thing that makes hyperbole a success, but in their opinions, dedication to the customer and the local makers they feature has been essential. “Even when we had our own stores and were competitors, we supported each other. We really balance each other and it’s kind of crazy how it all worked out,” said Baccaro.