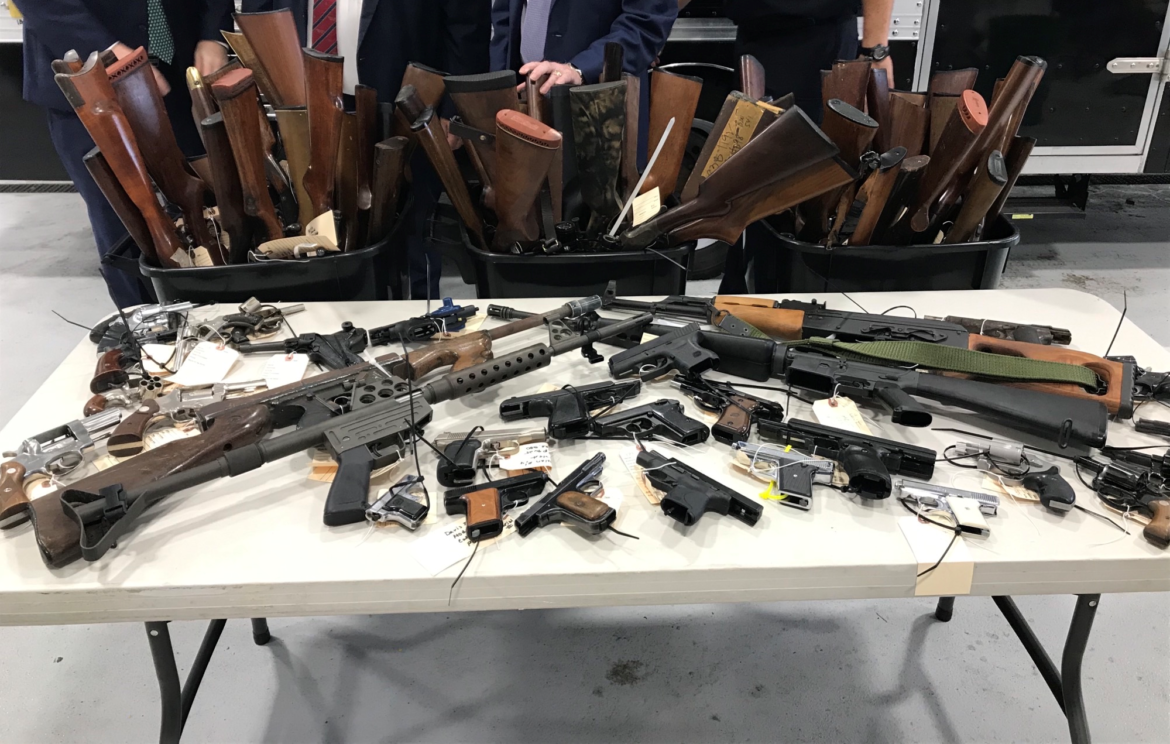 The state Attorney General's Office collected 147 weapons during a gun buyback on June 30 in Rockland County.

Cuomo described his approach as the first of its kind in the nation, treating gun deaths and violence as a public health and disaster emergency, a designation that permits funds to be quickly channeled to vulnerable areas.

“If you look at the recent numbers, more people are now dying from gun violence and crime than COVID,” Cuomo said in announcing the program. “This is a national problem, but someone has to step up and address this because our future depends on it.” After the worst of the COVID threat “we’re building New York back better than ever before, but part of rebuilding is addressing the systemic injustices that were exposed by COVID,” he stated.

The first bans the sale, purchase, or transfer of firearms to anyone with an active warrant for a felony or serious offense. The second requires gun and ammunition manufacturers and dealers to establish safeguards to prevent their products from being illegally, used possessed or sold, and allows them to be sued in state or federal court by municipalities, companies and individuals for violations of the law. The state says the bill comports with the Protection of Lawful Commerce in Arms Act, a federal law that gives the gun industry widespread immunity from lawsuits.

State Sen. Sue Serino, whose district includes the Highlands, voted for the prohibition on sales to people with warrants and against the measure targeting manufacturers and stores.

The governor’s approach includes use of a “cluster-based strategy” to identify hot spots, similar to its approach in zeroing in on areas hit hard by COVID-19. Initial hot spots on Long Island and in New York City, Albany, Buffalo, and Syracuse “include just 4,090 young men aged 18-24 but account for 48.5 percent of recent gun violence in those communities,” according to numbers compiled by the governor’s office.

A summary from his office observed that “the spike in gun violence began as COVID kept many young people out of school and work, and disruptions to social supports and services left at-risk youth without safe, productive places to go during the day,” destabilizing communities and “leading to a rise in gun violence.” However, it added, summer job programs cut the likelihood of young people’s involvement in violence by about 45 percent.

Further, according to the summary, although New York has the nation’s toughest gun laws, 74 percent of guns used in criminal activity come from beyond the Empire State’s borders. The initiative includes creation of a New York State Police Gun Trafficking Interdiction Unit to thwart illegal gun trafficking, increase interaction with other states, and share data.

The program also builds on the municipal police reform reviews Cuomo mandated last year and teams up with the John Jay College of Criminal Justice to help communities foster better relations with their police. Likewise, Cuomo directed the state Division of Criminal Justice Services to issue new regulations to implement a new law intended to prevent rogue officers who engage in misconduct or criminal behavior from getting law enforcement jobs elsewhere.

“Data shows that when community trust for the police is low, 911 calls and regular patrols decrease, while gun violence and crimes rates increase,” the governor’s office summary reported.

Other elements of the program include: