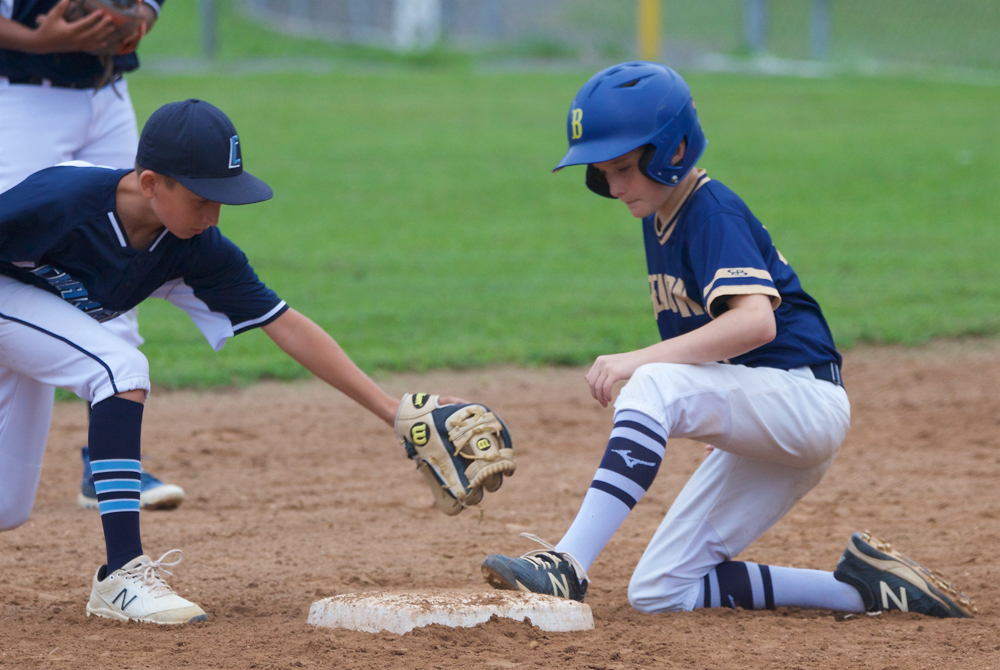 Beacon’s Connor Varricchio (R) slides safely in at second after smacking an RBI double against Wallkill. (Photos by S.Pearlman)

Win comes one day after loss to Wallkill at Memorial Park

Just like every other area team, the Beacon 11 and under baseball team has been battling this week to get games played in between rainstorms, but the Bulldogs played twice, blasting the Poughkeepsie Lightning, 7-0, on Wednesday (July 14), one day after dropping a 5-1 decision to the Wallkill Chargers. Both games were played at Beacon’s Memorial Park.

In the win over Poughkeepsie, Parker White started for the Bulldogs and pitched a gem, throwing six innings of one-hit ball, striking out nine, with no walks.

“You can’t tell if he’s up five or down five,“ coach Jed Varricchio said of White’s calm demeanor. “He’s so focused and zoned in, he’s an absolute gamer. And he had one of the best games I’ve ever seen an 11-year-old pitch.” 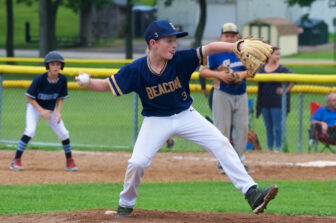 Aiden Heaton went three innings for Beacon’s 11U team in its game against Wallkill.

Connor Varricchio led the offense with a 3-for-3 performance, driving in two runs. White helped himself at the plate, going 2-for-3 with two RBI; Hudson Fontaine drove in a run, Jake DeLuise went 2-for-3 with two runs scored and five stolen bases, and Aiden Heaton went 2-for-3.

“That was a great game for our guys,” Varricchio said. “Poughkeepsie is always a strong team, but our guys hit and played sparkling defense. Our defense really helped Parker out; all of the hard work is starting to pay off.”

Varricchio also doubled in the team’s only run in the loss.

“We only had three hits,” said the elder Varricchio. “Wallkill is a good team — they hit the ball and they’re smart and well-coached. We played a good game; we don’t give up.” 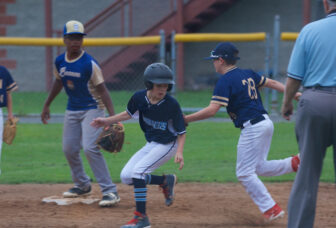 Beacon’s Hudson Barton (28) tags out a Wallkill runner in a rundown between first and second in a loss on Tuesday (July 13) at Beacon.

The team also played at the New York Elite Baseball Tournament in Newburgh on July 10 and 11, going 0-3. “We battled in every game, but just came up short,” Varricchio said. “It was a great experience for the kids; they got to see talent from all over.”

Varricchio said the team, playing its third year together, is showing good progress and has taken to a new coaching staff that includes Mike Fontaine and Nelson Hernandez.

“The guys are really doing well,” he said. “As long as they’re confident, having fun and getting better, that’s what matters.”