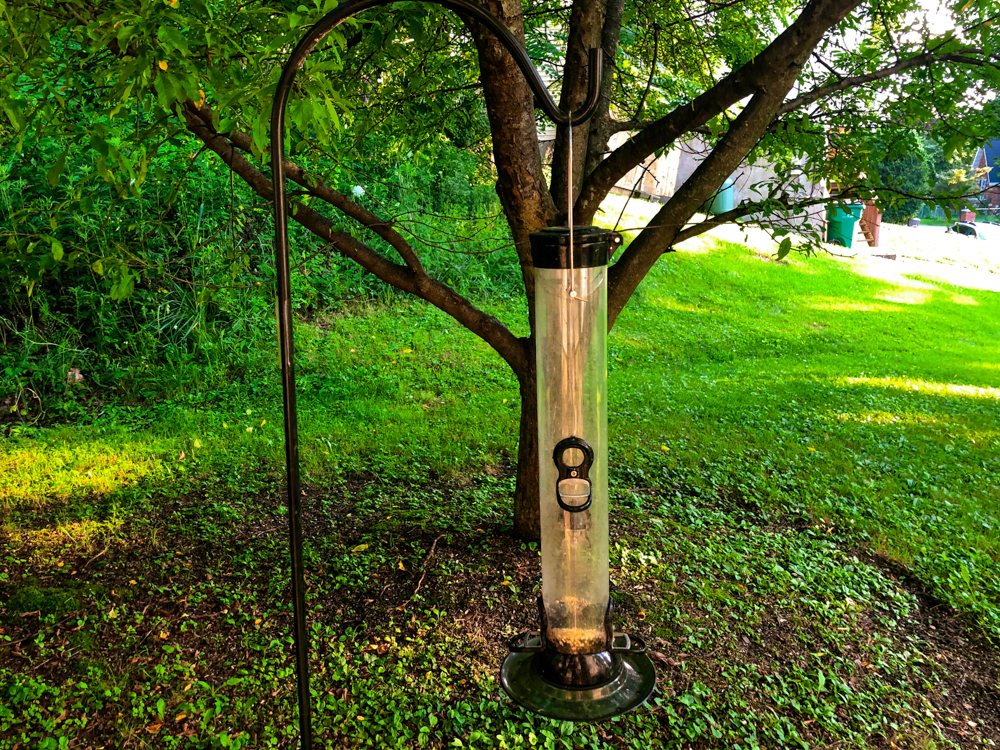 Out of an abundance of caution, the Audubon Society is urging New Yorkers to clean and put away their bird feeders for now. (Photo by B. Cronin)

Nothing in my yard brings me as much pleasure as my bird feeder: the way the grackles congregate around it in the morning; the flocks of cardinals that throng to the tree next to it, making it seem as if the branches had suddenly burst into a flourish of brilliant red berries; the squirrel who jumped off the top tree branch toward the feeder spread-eagle, like famed 1980s wrestler Jimmy “Superfly” Snuka, missing by two inches and face-planting into the soft dirt below.

Despite these delights, I have taken my bird feeder down and am urging you to do the same.

It’s not to thwart the squirrels, whose bullheaded persistence has gone from being annoying to somewhat inspirational. It’s at the recommendation of the Audubon Society, in response to a mysterious new fatal illness — so new that it doesn’t have a name yet — that started affecting songbirds in the Mid-Atlantic and Southeast regions this spring and has been working its way north.

It hasn’t been detected in New York state yet, but as Scott Silver, the director of the Constitution Marsh Audubon Center and Sanctuary near Cold Spring told me: “It’s just to be cautious and try and stem this as best we can.”

Symptoms of the disease include crusty eyes and signs of neurological impairment, such as the birds having trouble walking, flying or even staying upright. Death soon follows. Not much else is known at this time. It’s not clear yet if the disease is caused by a parasite or an infection. It’s not clear how the disease is being spread or all of the species of birds that are being affected. But there are clues.

The most common species of birds that have been found with the disease so far are blue jays, common grackles, European starlings and American robins, all birds that flock to bird feeders.

“It may not even be related at all to bird feeders,” said Silver. “It’s just that bird feeders are a place where birds of different species come down together and have the potential to transmit disease between them.”

That means in addition to taking down the bird feeders, birdbaths should be removed as well. David Curson, director of bird conservation for Audubon Mid-Atlantic, has referred to the practice as “social distancing for birds.” (Hummingbirds appear to be unaffected so far, so those of you with hummingbird feeders can leave them up.)

So far, known diseases such as House Finch Eye Disease (the symptoms of which involve a similar eye crustiness but not the noticeable neurological impairments), West Nile virus and avian influenza (both of which can spread to humans) have been ruled out. The most intriguing theory so far is a connection between the disease and the appearance of the infamous “Brood X” cicadas after a 17-year absence.

The cicadas made their scheduled return this year in the exact states where the disease was first detected, and many of the bugs are known to be infected with a fungus called Massospora that causes — and I swear to God I am not making this up — their butts to fall off.

Anyway, what were we talking about? Oh yes, bird feeders!

Take them down, folks. And while you’re at it, clean them and any birdbaths you have with a solution of 10 percent bleach to kill any lingering pathogens that may be on them. Silver at Constitution Marsh suggests that it’s normally a good idea to wash feeders every three weeks with water and a few times a year with a bleach solution, which I will admit I have not been doing.

Those of you with hummingbird feeders aren’t off the hook: Since you’re essentially just putting out sugar water, those need to be cleaned every day. Lingering nectar can quickly turn to mold and bacteria, which hummingbird’s tiny bodies are very sensitive to.

If you do find a bird that looks like it’s been stricken with the disease, the Audubon Society suggests contacting the regional Department of Environmental Conservation Wildlife Office at 845-256-3098. Handle any deceased birds carefully with gloves and place them in a sealed plastic bag before disposing of them in your household trash, which will limit the spread of any possible pathogens to other wildlife.

I was concerned that the birds I’ve grown to know and love would go hungry without the feeder up, but Silver told me not to worry. If you eat insects, this is buffet season.

“At this time of year, it’s easy for the birds to adapt,” he said. “There’s tremendous numbers of insects right now, and they’re relying more on insect protein than at any other time of the year. They are very resilient as far as that’s concerned.”