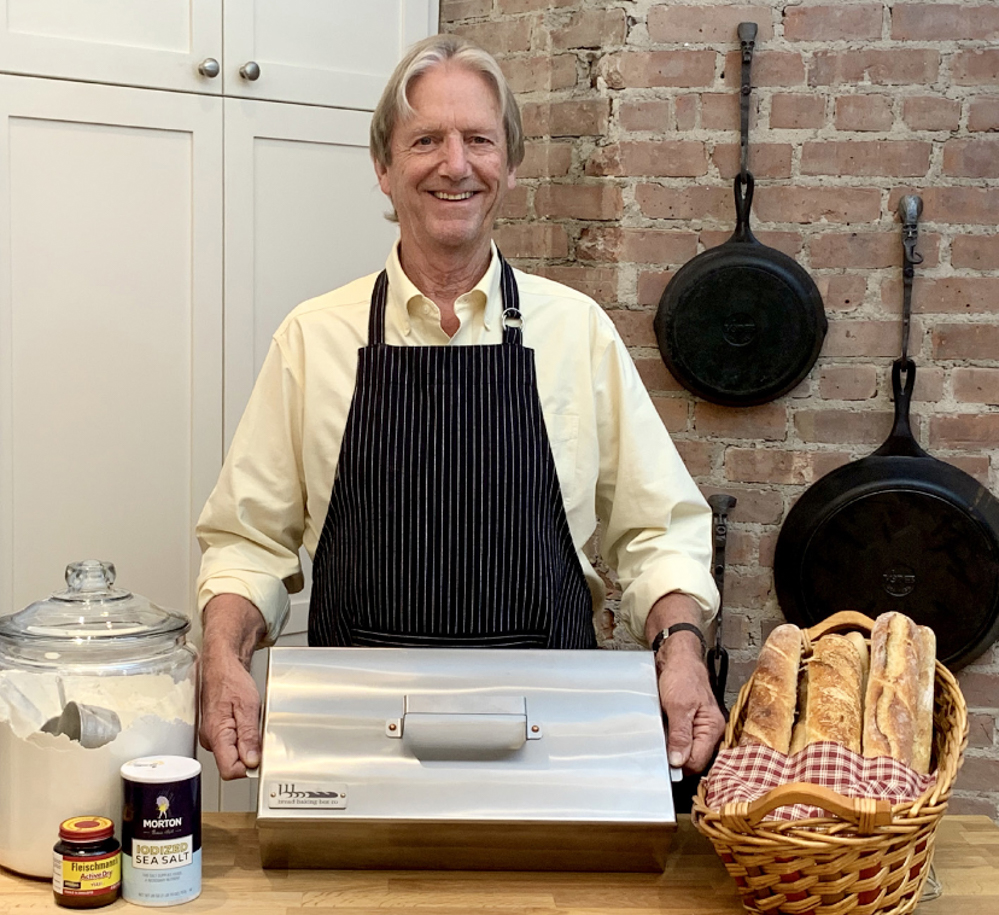 Dean Anderson, a Garrison resident, is the owner of Super Square in Newburgh and inventor of the baguette baking box (baguettebakingbox.com).

Tell me about Super Square?

Super Square is a metal-fabricating company I started 25, 30 years ago. It does a lot of garden iron work, like trellises and pergolas and jungle-gyms for plants. We’ve done a lot on the top of buildings in Manhattan. The name comes from tools I started making in 1993. I designed and patented measuring and layout tools.

Why create a baguette baking box?

I’ve been baking bread for years. Really good bread needs steam. I used to put the water in the bottom of the oven. I’d spray the inside of the oven. I’d do all kinds of things to try to make it look more professional and taste better. I realized that you need to control the atmosphere inside the oven, especially the atmosphere directly around the bread. So, I built a box because I had a metal shop. All of these are made by hand. I bend them on a machine, but all the welding and the finishing is done by hand; riveting is done by hand. It’s 100 percent made in Newburgh.

How does the box work?

I preheat it to 475 degrees. After you make your baguettes and you let them rise for a half an hour, you put one or two ice cubes into the baguette tray, you pull the hot baking box out of the oven, open the lid, put the baguette tray in with the ice, close the lid and bang it back into the oven. What the ice does is it gives you an amount of water in that very hot box which turns to steam immediately. After 24 minutes, you reach in the oven, take the lid off and let it brown for about 15 to 18 minutes and you develop the most beautiful crust. Oh, my god. The taste is wonderful.

Did you have setbacks while developing the finished product?

The first one I made was too heavy. And then, [with] the baguette trays, I didn’t figure out the ice thing until a couple of years ago — how to put the ice in, how to control the amount of water. Then it took quite a while for us to develop the perfect [baking] time for the box during the expansion phase and in the browning phase. I have boxes full of baguette trays that I will never use.

We’ve had a tremendous number of people that send us pictures of their first bread and it’s really incredible what they end up doing. We have several recipes for different types of bread and some people come up with some really interesting bread that they make themselves. I have this wonderful customer in Hastings who actually takes it on vacation with her. During the pandemic, there were a lot more people home and there were a lot more people cooking for themselves. So, that gave us a real boost. We had one day where we sold 50 boxes.

One thought on “5 Questions: Dean Anderson”