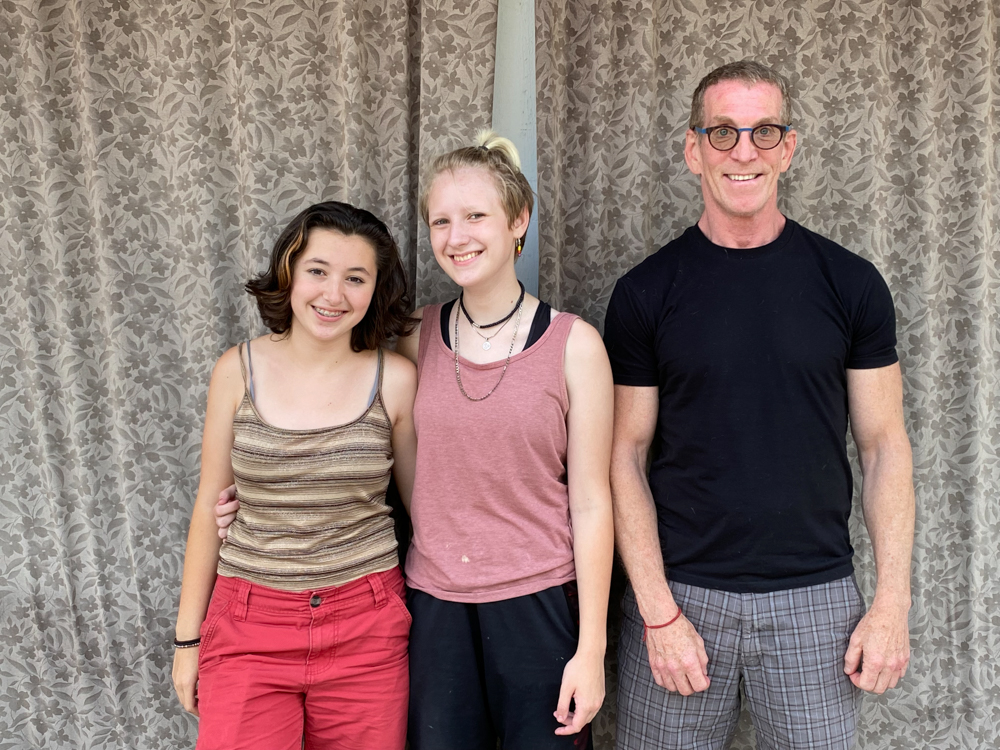 A trio of stage managers (left to right): Percy Parker, Ivy Heydt-Benjamin and Jim Semmelman (Photo by A. Rooney)

For two Haldane students, the biggest role is offstage

Help wanted: self-starter; someone who is able to supervise, highly organized, energetic, managerial, a soother of ruffled feathers, and a techno-wiz.

The job description of a stage manager goes on and on, but ultimately, a good one is the hub where all the spokes of a theatrical production meet, and the wheel “doesn’t turn until the stage manager says ‘go,’ ” said Jim Semmelman. Stage managers are responsible for an array of disparate tasks, from setting props to conveying the director’s instructions to cast and crew.

At a professional level the job ranges from collecting actors’ valuables and checking in with heads of different departments to telling the conductor and lighting-board operator the show is about to start and reminding the audience how much time they have before the curtain rises, said Semmelman.

“The stage manager is the CEO, responsible for all, making sure everything happens correctly on cue and that the show is kept fresh,” he said. “It all comes back to being the hub of the wheel, the source of all information.”

For two Haldane High School rising sophomores working as stage managers for the Depot Theatre’s summer youth productions, all of the above applies. Ivy Heydt-Benjamin, who is in charge of The Mystery of Edwin Drood [the “big kids” show for students in grades eight to 12], and Percy Parker, doing the same for Oliver! JR. [the “little kids” production for grades four to seven], are both benefiting from the mentorship of Semmelman, a veteran television and theater stage manager and Garrison resident who recently joined the Depot’s board.

After a recent long day of rehearsals for both shows (Parker is appearing in Drood, as well), the trio talked about the demands and rewards of being a stage manager.

Is there a stage manager personality type?

PARKER: I think there is. We tend to be more behind the scenes and quieter; we don’t prefer the spotlights.
HEYDT-BENJAMIN: I love theater and I love spotlights; I just hate the anxiety that comes along with being on stage. I like watching everything get created.
SEMMELMAN: It’s usually someone who has good organizational skills, and is always thinking ahead. It helps to have performed, because then you get a sense of what the performers need to do their job to the best of their ability.

How do you handle the dynamic of stage-managing peers?

PARKER: For the summer shows, one big thing to remember, especially for the little kids’ show, is that these are kids — 4th to 7th graders. When the director and choreographer are occupied with some of them, I’ve suddenly got 10 kids doing nothing, so they turn to me and we sit in a circle and play theater games. It’s about being confident, making sure they’re having fun, because while this is a show, it’s also a kids’ summer camp.
HEYDT-BENJAMIN: For the big kids’ show, it’s almost the same, because if people are given the slightest chance to, they’re going to goof off. Having most of the cast being one or two years older than me is hard. It can be awkward to take charge and tell people what to do.

What are stage managers doing during the performance?

PARKER: I’m wearing all black, so I’m less visible, and helping the actors get their props, in between moving tables and staying up with all the cues.
HEYDT-BENJAMIN: I stage-managed three Haldane Drama mini-plays.  I helped the actors with their quick changes, ran underneath the stage, getting them where they belonged, spotted while an actor was caught falling backwards. A lot of it is about allocating responsibilities, to reliably do something important.

Can stage manager skills translate to other fields?

SEMMELMAN: The skills developed are applicable to so many arenas. You grow into having a work persona in which you can take in a whole bunch of input and sort it into useful output.  You become adept at reading body cues, facial expressions and tones to know when someone is not well, and shift into ‘I should stop that before it happens’ mode. You’re able to handle high pressure, in quickly changing situations.
PARKER: There are also 12 different endings [via audience vote], plus I’m memorizing the cues for Oliver!, but I love it. At the Depot, part of the experience is learning. I started here when I was 7 years old, and, with my quieter personality, continued to be in the ensemble, which was great, but being an assistant stage manager for other shows gave me more confidence for Drood’s audition. I felt like if I can get 20 kids to listen to me, I probably can be loud and funny for my audition. Now I’m playing one of the leads for the first time.
HEYDT-BENJAMIN: I can have anxiety over things, so you might think being a stage manager is not a good fit, but it’s very different. I almost think of it as putting on a coat: Every single thing I put into my bag is another layer, a new person. Some of it is armor, some is organization and some is my skill in reading people.  Without all those layers, I can’t do anything. I am still the same person, but as stage manager my entire perception of the world has shifted.

Has the mentoring been valuable?

HEYDT-BENJAMIN: It’s both intimidating and invigorating to have what I expected described from an adult lens and place. Jim has treated us and talked to us like we are going into his profession.  He made us feel we could do it. He’s given us the confidence to know that we have what it takes, now.
PARKER: Meeting with Jim has showed me what doing this might be like somewhere else. He has talked to us as if we were in charge of something, which I guess we are, but I didn’t really understand that piece. His mentoring has been really valuable in putting our job into perspective, and while it was intimidating, it was also really helpful.

Oliver! JR., directed by Maya Gelber and Sophie Sabin, with choreography by Elaine Llewellyn, will be performed July 22 to 25, and The Mystery of Edwin Drood, directed by Lisa Sabin and choreographed by Tess Dul, from July 29 to Aug. 1. Tickets can be purchased at philipstowndepottheatre.org.