The Rev. Brian Merritt is the new interim pastor at the First Presbyterian Church of Philipstown. He succeeds the Rev. Doris Chandler, who left in October for a church in Michigan. 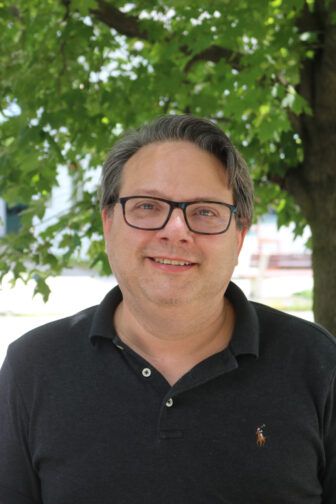 As a kid, did you dream of being a pastor or a New York Yankee?

I’m from Nebraska, so I would have been a Kansas City Royal. I wanted to be a missionary because I was a fundamentalist. When I ended that, I couldn’t be a missionary. Instead, I attended Austin Presbyterian Theological Seminary in Texas with my wife, Carol, who is the pastor in Bedford. I’m probably more liberal, and she’s more humanistic. I have a little cynicism toward the human race. I’ve been an activist as long as I’ve been a pastor, nearly 25 years, including in Louisiana, New Mexico, Tennessee and Washington, D.C.

What do people mean when they say, “I’m spiritual, but not religious”?

It’s an excuse to be a radical individualist. There is no spirituality without community. None of us walk into the desert and a beam of light comes down. Most Eastern religions, including Christianity, believe you practice religion, then have an experience. In the West, we want to have an experience so we can start practicing religion. Once I complete the sentence, “God is ___,” I’m not sure I believe anything anymore. It has to be an open sentence.

How can the decline in so many congregations be reversed?

Churches have to admit their complicity in racism, sexism and prejudice, and understand if you’re continually harping against critical race theory, you’re sinning. It’s coming to grips with how they have oppressed people and continue to be white supremacists. The Presbyterian denomination is 93 percent white; we opened Indian schools to assimilate Native Americans. We have to face our history and repent. It’s not just liberals; outside politics, conservatives are also saying: “We have to come to grips with this.” Churches are ignoring things that are important to new generations. If churches, with people primarily over age 50, don’t address the environmental catastrophe, what are they telling young people? Churches are inflexible. It’d take Presbyterians up to 10 years to write something that says we’re anti-racist. My denomination has a $10 billion pension fund, mostly from Wall Street. People see these things, the sexual abuse, the contradictions. We need to be flexible, transparent and willing to change.

Human sacrifice is considered barbaric, yet according to Christian theology, Jesus was sacrificed. Is that not barbaric?

A lot of feminist theologians would say it’s divine child abuse. Up until the 11th century, the church allowed different views of atonement. Blood atonement, the cross, wasn’t necessarily the earliest iconography. It was also Jesus as the good shepherd. Some early church fathers spoke of Jesus coming down, gathering people, bringing them back to who they were meant to be as humans. Some people need to have Jesus sacrificed to pay their debt. I understand that’s important to them, but I’m less convinced in blood atonement. If Isaac had been sacrificed by Abraham, that would have been pretty horrendous. It’s not where I am.

Religion often seems so serious. Is there any room for humor?

There should be. Unfortunately, many churches are humorless. In the liturgy, communion is a joyful feast, a celebration. It sometimes feels more like we’re marching to our death. I often feel I need to use that line from Fantasy Island, “Smiles everyone! Smiles!” Most people who are religious take themselves incredibly seriously. There should be humor. You have to start with yourself and move outward. We just had four years of evangelicals being completely, hilariously absurd and illogical — and they’re losing people like mad.

One thought on “5 Questions: Brian Merritt”