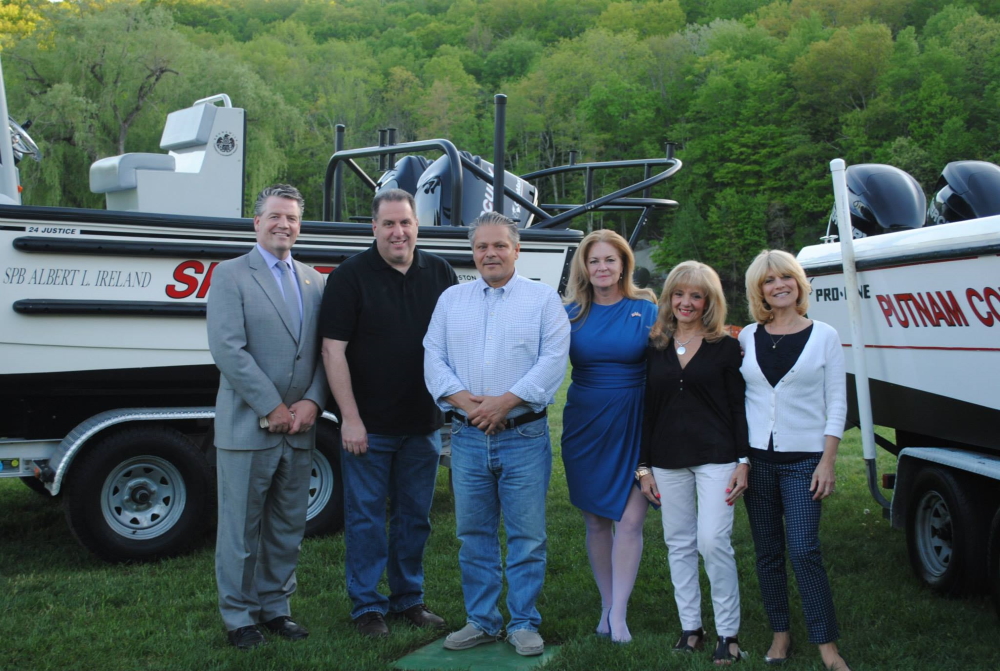 In this photo, posted on Facebook in May 2015 by Terrence Murphy, the then-state senator (left) posed with County Executive MaryEllen Odell (third from right) and four members of the Putnam County Legislature (including Ginny Nacerino, second from right) at a ceremony to christen the Sheriff Department's boats in honor of local veterans such as Staff Sgt. Albert Ireland of Cold Spring.

Legislator: ‘Demonstrate the need and you have my vote’

With support from the county Legislature, County Executive MaryEllen Odell last fall eliminated a $45,000 allocation for the unit, which also covered Lake Mahopac. When the Sheriff’s Department explained this spring that it had scraped together money from its reserves to continue operations, using two boats provided at no charge by the state, Odell demanded that New York reclaim its vessels. She also appealed to the county executives of Orange, Rockland, Dutchess and Westchester to assist with marine emergencies along the shores of Cold Spring, Garrison and Philipstown as part of mutual aid.

At last week’s meeting, Legislator Nancy Montgomery, who represents Philipstown and part of Putnam Valley, reminded members of the Protective Services Committee that “mutual aid means mutual.” In other words, said Sheriff Robert Langley Jr., “we will help you out with our boats, but you have to help us out with your boats.”

Legislator Ginny Nacerino of Patterson, who chairs the committee, said the evening’s topic was not “defunding of the marine patrol.” Instead, she said, “we’re merely discussing safety issues.” She demanded that comments be limited to a June 30 statement by the county’s Bureau of Emergency Services, which discussed whether a teenager who drowned near Cold Spring might have been saved by a patrol boat. She then recessed the meeting for several minutes when a Mahopac resident tried to question the rationale for ending the patrols.

“The drowning was not due to lack of sheriff’s resources being there,” said Nacerino, adding that “it’s not our river.”

Montgomery countered that “it is our river.” She asserted that the Sheriff’s Department marine unit could reach its boat docked at Cold Spring “within seconds and get on the river in minutes.”

The county says volunteer fire departments, like those in Cold Spring and Garrison, can handle river rescues, although Montgomery noted their marine training does not match that of sheriff’s deputies.

The June 30 statement listed 19 agencies from both sides of the Hudson that assisted with the search for the missing swimmer. That “impressive” number “just shows the massive presence that is available when there is an emergency on the Hudson River,” said Legislator Neal Sullivan of Carmel-Mahopac, who added that local fire companies “bring tremendous resources that we don’t have at the county level.”

Shea disagreed. The June 30 news release seemed “to be trying to justify the means to the end,” he said. “Our problem in Philipstown is that with tourism, with the use of the river, it’s just a lot more difficult for our volunteers, regardless of mutual aid.” Local responders spend “all weekend, every weekend and many weekdays, down by the river, or atop Breakneck,” answering calls, he said. “We really appreciated it when the sheriff’s boat was on the river.”

He also dismissed any speculation that a river patrol boat would not have been able to save the swimmer. “No one can say, no one will know,” Shea said. “The issue becomes” having sheriff’s deputies “not able to access the river. It adds a lot of responsibility to Philipstown, to our volunteers,” he said. “We feel it’s important to support the local volunteers with the paid service” of the deputies. He asked for reinstatement of the boat patrol, calling it “such a minor part” of county spending.

Van Tassel expressed similar views. “It’s absurd to me” to argue that a volunteer fire company, with a boat, can replace the Sheriff’s Department on the water, he said. Despite some overlap, “their responsibilities are completely different.” In a July 21 letter to Odell and the county legislators, he wrote that “the additional eyes on the water by deputies who were available that evening and who have vast knowledge of the river in the area could have made a huge difference.” He urged the county to “finance the sheriff’s marine unit before another tragedy occurs.”

Langley said “there’s only one power that could know” if a boat would have mattered, “and it’s Almighty God. Perhaps this is God telling us that we need that boat out there.” He noted the marine unit boat was equipped with thermal imaging, which can locate a person in the water. “We don’t know what the outcome would’ve been” had it been utilized, he repeated. “But maybe this 17-year-old child could have been rescued.”

Chris Tobin, the head of the Philipstown Volunteer Ambulance Corps, said he thought the absence of a sheriff’s boat “had no bearing” on the outcome, but added, “I am in full support of the sheriff’s boat.” Department’s Kenneth Clair, the commissioner of the Bureau of Emergency Services, said that the teenager’s companions had searched for her and a time lag of about 40 minutes occurred between her disappearance and the dispatch of emergency responders.

Legislator Paul Jonke of Southeast accused Langley of not supplying data to justify the marine unit, which operated for 23 years, as the county prepared the 2021 budget last fall. “We got nothing,” he said.

“We did produce documents,” Langley responded, saying his department had sent materials to Odell in August. “The budget was imposed upon the Sheriff’s Office with no discussion from the county executive’s office.” As a last-ditch effort, he said his department proposed reductions in its other expenses to save the marine unit, but was prevented from presenting that alternative.

Besides mentioning the drowning, Montgomery, Van Tassel and Langley raised concerns about policing on the water. The sheriff mentioned a need to thwart speeding, drunken boating, reckless jet skiing and illegal conduct.

Louis Liotti, who lives in Philipstown, suggested that the county not only restore the patrols but upgrade them to a full-time operation during the boating season. “Those interested in protecting the citizens of Putnam, both for the safety of us and from a law enforcement standpoint, might investigate having 24/7 coverage,” he said.

“Why can’t we just reinstate [the patrols]?” Montgomery asked. “Put it on the agenda. Save some lives.”

Nacerino noted that Odell, not the Legislature, returned the boats to the state. “It wasn’t under our purview,” she said. Going forward, “we will continue the conversation” though “we felt we made the right decision,” she said. Nonetheless, she added, “demonstrate the need and you have my vote” to restore the patrols.

3 thoughts on “Philipstown Officials Call for Return of River Patrol”