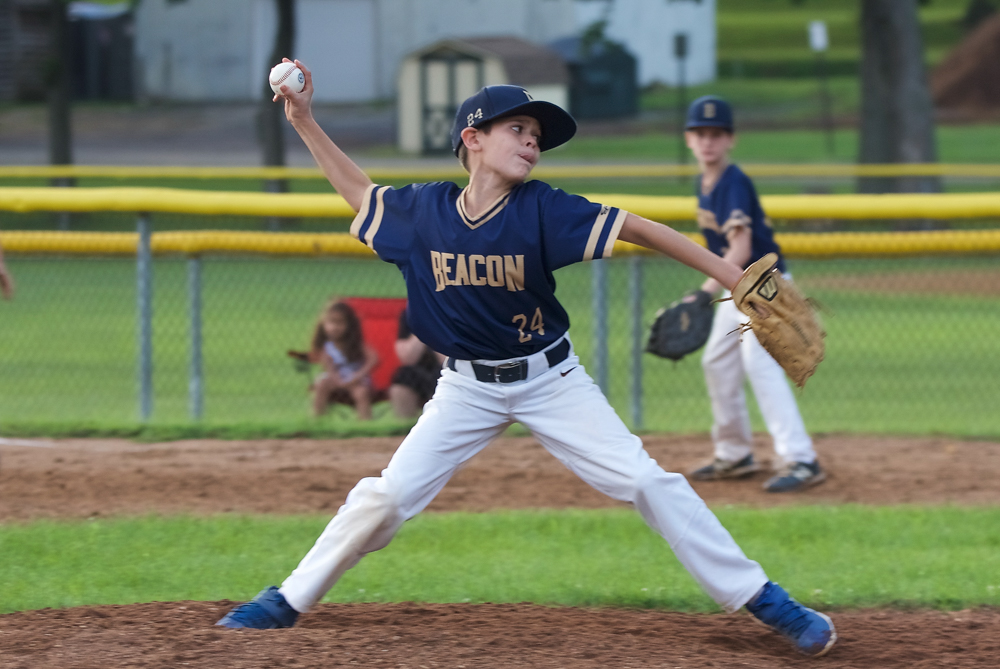 Jake Deluise delivers a pitch during the Beacon 11U team's final game of the summer season last week at Memorial Park. (Photos by S. Pearlman)

The Beacon traveling baseball team for players ages 14 and under had its hitting shoes on Wednesday (July 28) in the opening round of the Greater Hudson Valley Baseball League playoffs. Given the No. 2 seed, the Bulldogs rolled past No. 15 Mount Pleasant, 13-3, in a five-inning, mercy-rule shortened game at Memorial Park.

The 14U Bulldogs (13-5-1; 10-2 league) are scheduled to host No. 7 Poughkeepsie NorthStar (6-6) at noon on Saturday (July 31) at Memorial Park, with the winner advancing to games next weekend in Danbury, Connecticut. 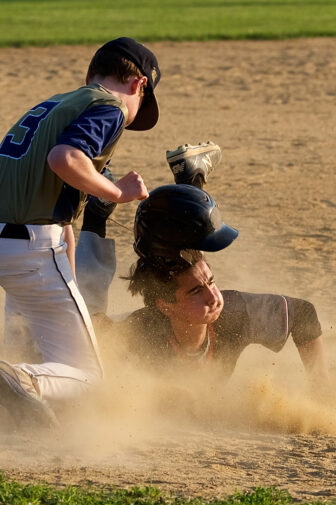 Ryan Smith (3) of the Beacon 14U team tags a sliding runner out at third in Wednesday’s Bulldogs win.

In the July 28 win, Nick Albra drove in the run that ended the game in the bottom of the fifth. Derek Heaton led the hit parade for Beacon, going 4-for-4 with three RBI, including a double and triple. Jackson Atwell, Mercer Jordan, Austin Jurgensen and Jack Antalek each drove in a run. Ronnie Anzovino was 3-for-3.

The Bulldogs feasted on the Colonial’s pitching. “Mikey gets on base at the top of the lineup,” Atwell said, “and Liam [Murphy] does the same in the two hole — he was on base three times. Then Heaton goes 4-for-4. He’s been on fire.”

Last weekend, Beacon finished fifth among 12 teams at a tournament in Aberdeen, Maryland. The Bulldogs split four games, losing to West Chester, Pennsylvania, 3-2; losing to a team from Delaware, 15-0; and defeating teams from Potomac, Maryland, 10–0, and Staten Island, 5–4, on an Austin Jorgensen double in the 10th inning.

It’s been a season of learning the game for the Beacon team of players ages 11 and under, which at Memorial Park on July 23 closed out its summer with a 10-1 loss to a squad sponsored by the Hudson Valley Renegades.

Connor Varricchio, Hudson Barton and Jake DeLuise took the mound for the 11U Bulldogs, but Hudson Valley ended the game on the mercy rule in four innings.

“We hung with them for a while, but they are a very good hitting team,” said Coach Jed Varricchio. “It’s good for us to play them, and see where we stand, see things we need to work on.”

The team finished 3-6 (nine of its games were canceled) and did not qualify for the playoffs. Varricchio said its best game of the season was an 11-9 victory over the Cadets Baseball Academy from Fishkill on June 14. “After a tough first inning, we battled all the way back,” he said.

On the mound for the Bulldogs this summer were Connor Varricchio, Julian Rivers, Aiden Heaton, Hudson Fontaine, Nolan Varricchio, Jake Deluise and Hudson Barton. “I was happy with how they matured, and I think some of them will be pitching for Bob Atwell [the Beacon High School varsity coach] in a few years.”

This was Varricchio’s fourth summer coaching this group, which has a core of seven players. “It’s been so great to see them make progress,” he said. “We’ve had some ups and downs, but I couldn’t be prouder. They always stay positive.”

The team will play once more, in a Labor Day tournament at Poughkeepsie.

One thought on “Playoffs: 14U Beacon Baseball Advances, 11U Falls”