A visual arts triple threat, Khalidah Carrington divides her creative focus between drawing, graphic design and photography, weaving in and out of the commercial world.

Working largely with clients carving out a brand identity, Carrington, 27, has at the same time been developing her own. A prominent example of her work is a mural at hyperbole at 484 Main St. in Beacon. 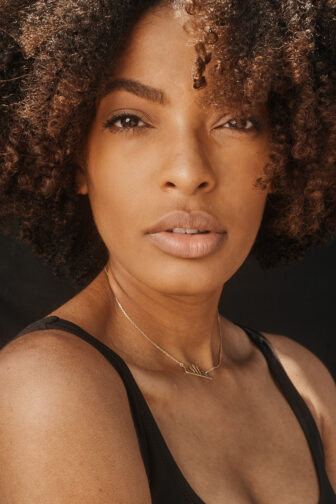 “They wanted to use their brand colors, and I showed them some ideas for a large-scale mural with abstract shapes and lines, to go across their back wall and the area where their check-in desk is,” she says. “It was freeform and flowing. It was interesting to do something large-scale, and also to paint.”

Carrington’s sense of self was instilled early on, at home. After her family moved from the Bronx to Beacon when she was 5, she and her three sisters were home-schooled. “My mom pushed us to do what we wanted to do,” she recalls. “Every time we had an interest, my mom would push us in that direction, and she made sure we stuck with it.”

She later attended a private high school but disliked the classroom dynamic and dropped out on the first day of her senior year. “I just said, ‘I’m not going,’” she says. She went on to earn her GED and an associate degree in visual arts from Dutchess Community College.

She considered enrolling at a four-year college but was already designing logos and graphics and developing her own style. Carrington says that attending DCC helped her in “learning to maintain a routine, developing a method to the madness, or I wouldn’t get anything done.” She also completed a project there in which she created self-portraits “using colors to do a drawing without any lines, and then flipped the concept.” This led to a style which she describes as “highlighting the shadows, using people’s natural beauty.”

She said the style was rooted in part “from me coming out of an emotionally abusive relationship. I was anxious. I didn’t view art as a professional thing. I felt lost until that assignment. It was a dive deep into who I am as a creative being.”

More recently, Carrington has shifted direction and focused on illustration. She finds commercial clients mostly through referrals and social media marketing. Much of the work is building brand identifications, including creating content, designing props and photographing products. She hopes to one day own her own social media marketing, management and production company “that gears toward helping creatives of color like myself.”

She says she feels fortunate to work with clients who offer her liberty. “It’s rare, because most campaigns have to fit within strict brand guidelines and sometimes you’re not afforded the room to be creative, but it can work.”

Carrington is also a senior gallery attendant at DIA:Beacon, which she says has influenced the way she looks at other people’s art. “It makes me appreciate hyperrealist paintings because I’m around minimalist, conceptual work all the time,” she says.

The pandemic helped her business, rather than hurt it. “People started to want to do what they actually wanted to do,” she says. “Mundane routines weren’t fulfilling them. There was a surge of new artists and creators. People are putting in the work to be those things.”