When the media and the president declared independence from “the virus” around July 4, everyone was jubilant. Some people, however, felt pandemic blues at it all coming to an end. We had been through a period of mass reflection on love, loss, race, friendship, education — everything we knew as normal. Normal exploded.

Now that the pandemic is not over (thanks, Delta variant! and whatever other variants of the alphabet are going to come, like virus hurricanes), we get to continue exploring “normal.” Normal, for this month’s column, is love, marriage and divorce. That third word, usually a bad word that everyone is afraid of, gives different people different feelings of relief, freedom, sadness, loss, gains. 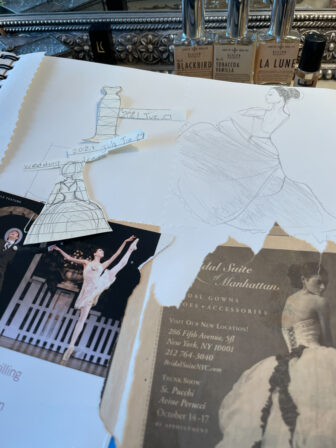 The cutouts are by an 11-year-old who is already learning from Say Yes to the Dress that this celebration of fabric on the body is reserved for marriage ceremonies. What if they were Love Dresses? (Photo by K. Martin)

From childhood, we are taught to get married. Some are scheduled into arranged marriages. Others of us are pretend-married as toddlers, as a game. I married two neighbor toddlers when I was a teenager, and I was witness to two of my girlfriends marrying each other in the halls of my private girls’ school. To not marry a best friend, at that point, was like, not cool. I felt left out when no one wanted to marry me!

In childhood and into teenage years, however, we are further persuaded by romcoms that marriage is the answer. No one discusses the legality of what you just signed when you got your “marriage certificate.” What is that? Do business partners run down to the courthouse and just sign a “business certificate” saying they can trust each other for life, raise children together with singular, aligned vision, and have a happy and prosperous life?

Business partnerships come with understood and accepted risks, and an operating agreement, which contains directions for how to exit the partnership. Marriage certificates come with amazing wedding gowns, tons of fabric, diamond rings, years of anniversary presents, and years of promise for prosperity and health. And someone to take you to the doctor and care for you when you get the virus. And health insurance to enter in on as a “dependent.” And tax forms where one partner is the “spouse” and the other is the “taxpayer,” even if both pay the taxes.

The support structure for divorce is not mainstream. When people go through a divorce, they are typically on their own, alienated, at times, from their married friends and fueled, at times, by plotting attorneys.

Remember when people snickered at Gwyneth and Chris’ announcement that they were “consciously uncoupling?” Why was that so bad? Is divorce socially structured to drive people to hate each other, in order to justify the uncoupling? What if we hosted a shower for the newly uncoupled people, to shower their new homes and lifestyles with new energy, decorations and things they need?

I ran this idea past a relationship therapist based in Beacon, Moraya Seeger DeGeare. Her first response was: “Awesome.” Then she expanded:

“We are taught to think of marriage as a celebration, and divorce as something to fear and grieve. We could shift this to talking about each as points of change.

“Many times couples have to grieve a lot of single individual life experiences when they get married, and have shame over missing their previous life. Shame blocks connection and intimacy, so not talking about it can lead to disconnection in the marriage.

“Equally, many after divorce feel a freedom and happiness that they didn’t have in the relationship. Both changes can be hard and wonderful. If we shifted to also throwing a shower after divorce, we would be supporting the family as a whole, a family that probably needs it three times more than when they got married.”

The next part of Moraya’s statement struck me, because we’re teaching our children all of the time, with our action, inaction and reactions. She said:

“We would be teaching our children that knowing what you need does not mean failure, that listening to your body doesn’t mean keeping everyone happy. It can also tell our children that being brave is making hard decisions that you hope are for the better without knowing for certain, and we have to use the information we have.”

Gymnast Simone Biles withdrew from her team and individual Olympic competitions this week. She signaled that it is OK to recognize when your body and mind can’t handle something, no matter how great you are, or how hard you have worked to get there.

While I was writing this column, my 11-year-old daughter came in to tell me about how she loves the show Say Yes to the Dress. She loves the “toxic mother and the toxic best friends.” She didn’t know I was on this topic. I tossed her the idea of having a wedding dress for every love. That it could be called a Love Dress, and she could have several. She looked at me cross-eyed. And asked if I would be in her entourage at the bridal gown store. Of course I would be, if she wanted me to, I told her.