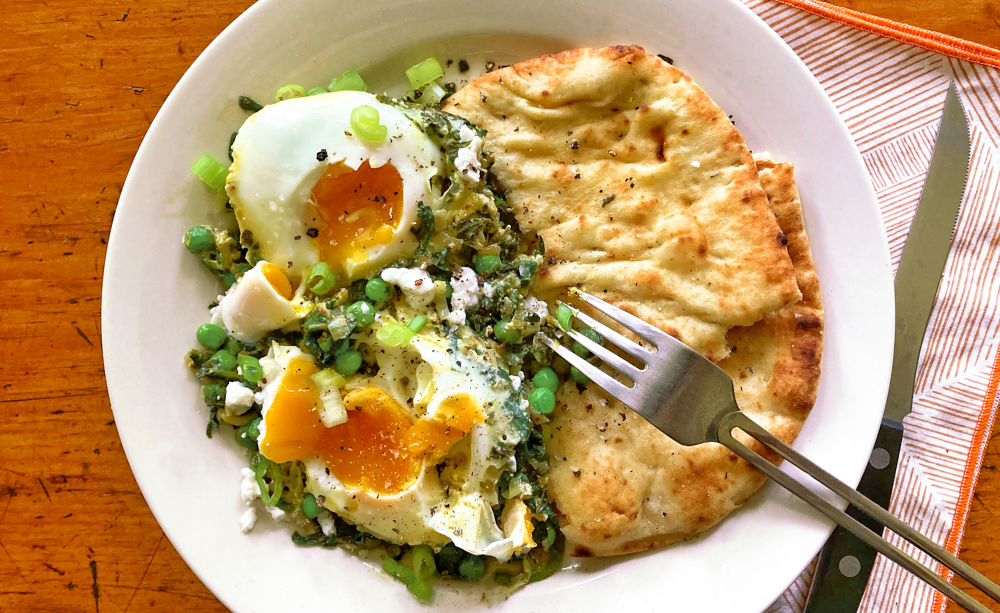 Even if you think you have it pegged, “real” shakshuka (or shakshouka or chakchouka) has a complicated history.

Commonly thought of as a single-pan preparation, this warm, spiced red sauce or stew usually incorporates eggs cracked and poached. Generally considered to have originated in Tunisia, shakshuka is embraced on the Maghreb (Barbary Coast) of northwestern Africa and countless versions exist well into the Levant and countries bordering the eastern Mediterranean. The name translates, roughly, as “shaken together” or “mixed.”

The modern sauce is clearly a result of post-colonial exploration/exploitation, because it incorporates tomatoes, which weren’t really accepted into Eastern Mediterranean pantries until the 19th century.

Earlier Turkish shakshuka recipes describe a vegetable and minced-liver stew; related recipes have been part of Sephardic cuisine for centuries. And Jews of the Ottoman Maghreb are responsible for a vegetarian pareve version. Tunisian Jews added eggs and spices as varied as ginger, paprika, cumin, coriander, caraway, cayenne and turmeric. Herbal notes like mint, parsley, cilantro or fenugreek were also included.

Culturally and geographically distinct versions of the basic sauce include wildly divergent ingredients such as preserved lemon or olives, sheep or goat’s milk cheeses, yogurt and fruit or nuts. Others add potatoes, favas, artichokes or eggplant. Sweet red peppers are common, and for the carnivores, recipes could include minced lamb, and sausages such as chorizo or merguez (also served on the side, along with typical flatbreads and pickles).

Maybe you’re finally getting the picture that shakshuka is a state of mind rather than a formula. And it just won’t be contained by cultural or technical boundaries — even the commonly poached eggs can be scrambled or heated with herbs and spices and added directly to the pan (see the Turkish eggy preparation known as menemen). Farther afield, to the north, Uova in Purgatorio (“Eggs in Purgatory”) or Uova All’Inferno (“Eggs in Hell”) describe eggs poached in a spicy Italian sauce containing olives, capers and anchovies. The classic French dish of eggs poached in sorrel cream sauce bears a passing resemblance to the idea of shakshuka and is the touchstone for this green version.

Here we use leeks, onions and spinach as the basis for a vaguely Egyptian saag incorporating cumin, Turkish Aleppo pepper (and dried fenugreek). You could certainly use other leafy greens such as kale or chard. I suggest green bell peppers or seeded and diced zucchini to replace the peas used here that are admittedly going, going gone, although I thoroughly enjoyed the dish through the late winter and into early spring using organic frozen spinach and peas. The only practical requirement is that your sauce be thick enough to contain the eggs.

I used a mild, creamy goat’s cheese instead of the usual feta; make substitutions based on what you have. And as tomatoes are coming into their own soon, I have designs on a green version featuring tomatillos, to bring things back around to where we originally thought we started.

1. In a large bowl, toss spinach with a healthy pinch of salt; massage briefly (about 1 minute) and set aside.

2. Heat oil in a 12-inch, nonstick skillet over medium-high until shimmering. Add leek and onion; cook stirring until softened, not browned (about 7 to 8 minutes). Add garlic and cook until fragrant (about 30 seconds). Add spinach and cook, stirring until wilted (about 3 minutes). Add cumin, Aleppo pepper, nutmeg and half of the goat’s cheese; stir until the cheese just begins to melt and stir in the peas. Taste and correct seasoning. If the mixture seems dry, add no more than 1/4 cup water. (You want just enough moisture to steam-poach the eggs.)

3. Lower heat to medium-low and with the back of a spoon form 4 (or 8) evenly spaced divots in the vegetables, deep enough that the pan bottom is visible, and large enough to just accommodate an egg. Crack an egg into each divot; season with salt and pepper. Cover the pan; cook until whites are set and yolks are still runny, about 5 to 6 minutes. (Do not stir the skillet once the eggs are in and pan is covered. Do rotate pan about halfway through to cook the eggs evenly.) Off heat, crumble the remaining cheese over all. Serve with warm flatbread or buttered toast and garnish with chives or scallions.