Stephen Clair just wanted to make it clear in a Facebook message he posted last week.

Anyone eligible for a COVID-19 vaccine who had not received the shot could not enter Beacon Music Factory, the Fishkill Avenue school where musicians teach adults, teenagers and children how to play a variety of instruments. All others must wear a mask, he wrote.

The school’s instructors “felt relieved that I was making this clear,” said Clair on Wednesday (Aug. 4).

Something else is apparent: The warnings about the highly contagious delta variant of the virus that causes COVID-19 have come true, and the strain is driving what may be a third wave of the pandemic characterized by infections among people who have yet to be vaccinated.

As of Tuesday, both Dutchess and Putnam were among the U.S. counties where the federal Centers for Disease Control and Prevention recommends masks be worn indoors in public because the level of community transmission is “substantial.” 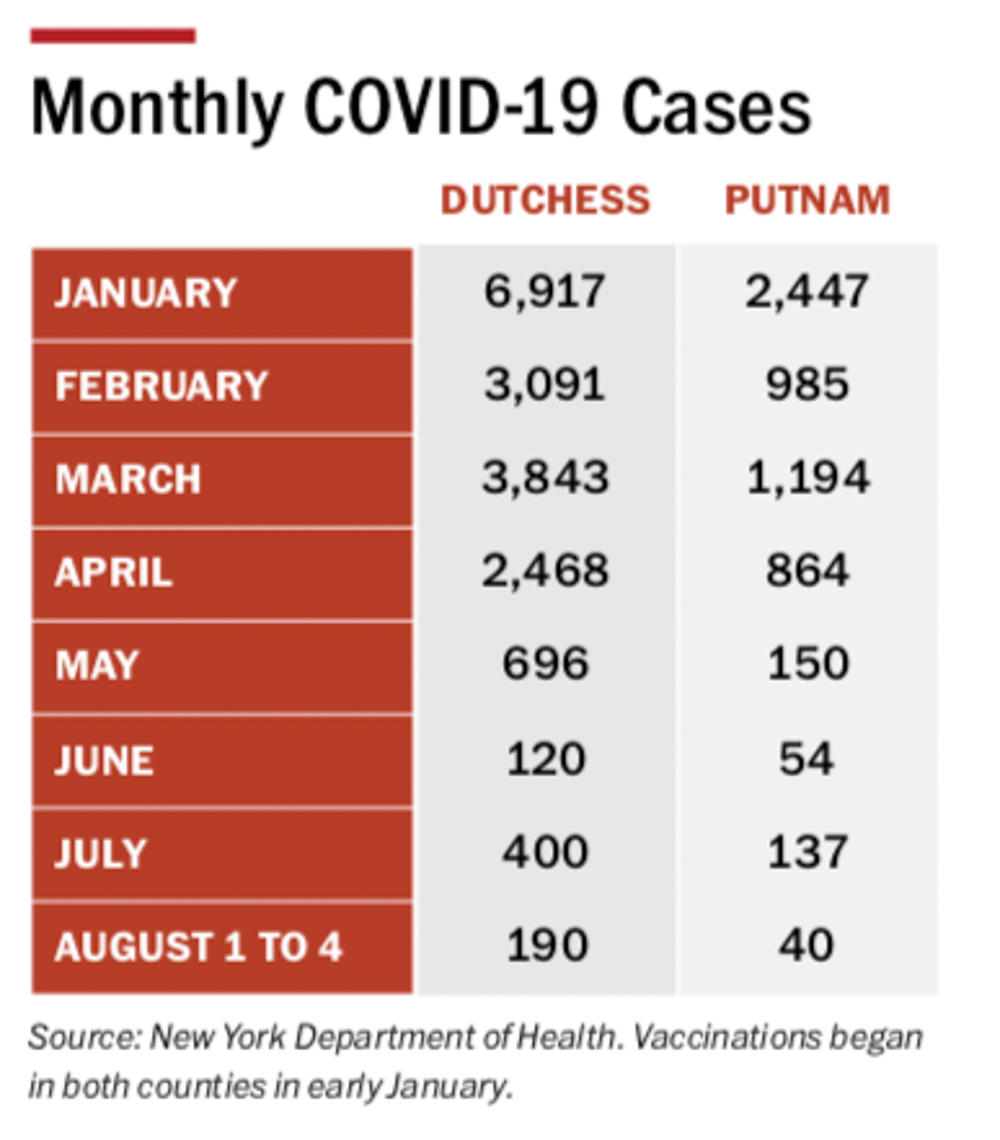 After dropping dramatically in June, infections in Dutchess and Putnam have been rising since last month, accelerating from the end of July into the first few days of August.

Active cases in Dutchess County have increased more than fivefold and in Putnam more than sevenfold since July 1, when the level of coronavirus transmission in both counties was rated “low” by the CDC.

The 76 cases reported for Dutchess on Wednesday was the county’s highest one-day total since April 17, and it averaged 40 new cases a day for the previous week, compared to 3.4 during the first week of July. People hospitalized for COVID-19 in the county jumped from one on July 28 to 12 on Tuesday.

Beacon, where active cases had not exceeded five for a prolonged stretch and where the vaccination rate is below the state average, stood at 15 as of Tuesday, according to county data.

The news was just as bad for Putnam, which averaged 11.8 new cases a day during the same week, up substantially from 0.5 during the first seven days of last month. Active cases in Philipstown, where the vaccination rate is well above the state average, were still at or below five as of July 29.

Alison Kaufman, an epidemiologist who was hired in March by the Putnam County Department of Health, said on Tuesday that “we were all hopeful that we wouldn’t see another surge.” But the county’s seven-day rate nearly doubled to 83 cases per 100,000 people as of Sunday, from 42.5 on July 25.

“Unfortunately, all of our indicators are telling us the same thing,” said Kaufman.

The federal Centers for Disease Control and Prevention last week updated its guidance to recommend that all teachers, students, staff and visitors wear masks inside schools, including those who are vaccinated. It had previously recommended masks only for those who have not been vaccinated.

On Thursday (Aug. 5), Dr. Howard Zucker, the commissioner of the New York State Department of Health, said that when the state emergency disaster order was lifted on June 25, school districts were “re-established as the controlling entity for schools.”

Therefore, he said in a statement, “schools and school districts should develop plans to open in-person in the fall as safely as possible, and I recommend following guidance from the CDC and local health departments.”

Classes begin in Garrison on Sept. 2 and in Beacon and Cold Spring the following week.

The delta variant appears to be more than twice as contagious as the strain of the coronavirus that launched the pandemic in March 2020 and is “causing large, rapid increases in infections,” the CDC said on July 27. The variant is responsible for more than 80 percent of new cases nationwide, according to the agency, and 62.1 percent of cases in New York state in the four-week period ending July 17.

“The highest spread of cases and severe outcomes is happening in places with low vaccination rates and among unvaccinated people,” according to the CDC.

The number of Beacon residents who had received at least one dose of a vaccine stood at 56 percent on Thursday, well below the state average of 61.2 percent, according to federal data. Rates were much higher in Philipstown — 73.3 percent in Cold Spring and 68.6 percent in Garrison. Dutchess’ vaccination rate was 60.7 percent as of Thursday and Putnam was at 65.3 percent.

There is some good news: a 40 percent increase in the state’s vaccination rate over the last three weeks after months of waning demand.

The state reported nearly 45,000 vaccinations on Wednesday, about 11,000 more than the previous day and 16,000 more than a week earlier. Vaccinations also rose slightly in the seven-county Mid-Hudson Region, which includes Dutchess and Putnam. There were about 3,400 reported on Wednesday, compared to 2,915 on Tuesday and 3,137 seven days before.

Michael Nesheiwat, Putnam County’s health commissioner, had one message for residents: get vaccinated.

“This is the best way residents can reduce their individual risk of post-COVID conditions and help reduce cases in our community,” he said on Tuesday.

One thought on “Back to the Masks”