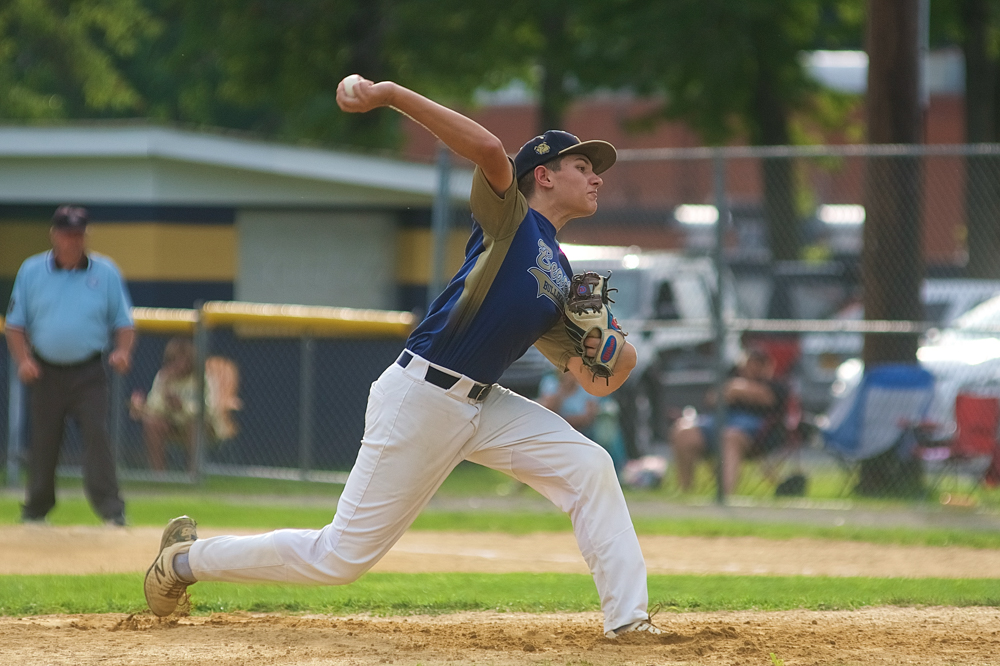 Mikey Fontaine threw a no-hitter in a playoff game on Tuesday, sending the Beacon 14U team to the divisional title game. (Photos by S. Pearlman)

Fontaine shuts down Port Jervis for 14U win

Watching the first inning of the Greater Hudson Valley Baseball League playoff game on Tuesday (Aug. 3) between Beacon and Port Jervis, it looked like Bulldogs pitcher Mikey Fontaine might be in for a long night.

As it turned out, he wasn’t.

Fontaine — who will be a freshman at Beacon High School next month — tossed a no-hitter, shutting down the No. 11-seeded Red Hawks in a 10-0 victory for the Bulldogs travel team for players 14 years old and under. 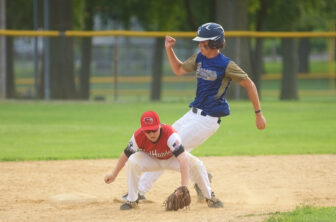 Jack Antalek cruises into second against the Red Hawks.

On Tuesday at Memorial Park in Beacon, Fontaine, who played on the high school varsity as an eighth grader this spring, pitched a complete-game shutout, with two strikeouts, utilizing a well-located combination of fastballs and curves. 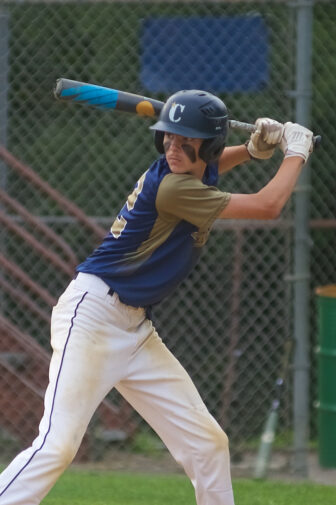 “He had a rough first inning,” said Coach Bob Atwell, who also coaches the high school varsity. “He had three base runners [two walks and one hit by pitch] but he pitched out of it and cruised from there.

“After a 20-pitch first inning, he finished the game with 70 total,” Atwell said. “He located the fastball and curve well, and credit our guys — they played solid defense behind him.”

At the plate, Derrick Heaton went 3-for-3 with two RBI; Mercer Jordan was 2-for-4 and drove in two runs; Fontaine went 2-for-5 with an RBI; and Jack Antalek, Austin Jorgensen, Jackson Atwell and Ronnie Anzovino each drove in a run.

“Heaton has been on fire lately at the plate,” Atwell said. “He’s hitting over .500 in our last six games, and he’s been hitting well all season.”

This same Bulldogs team won a league summer championship two years ago. Last year it lost in the first round.