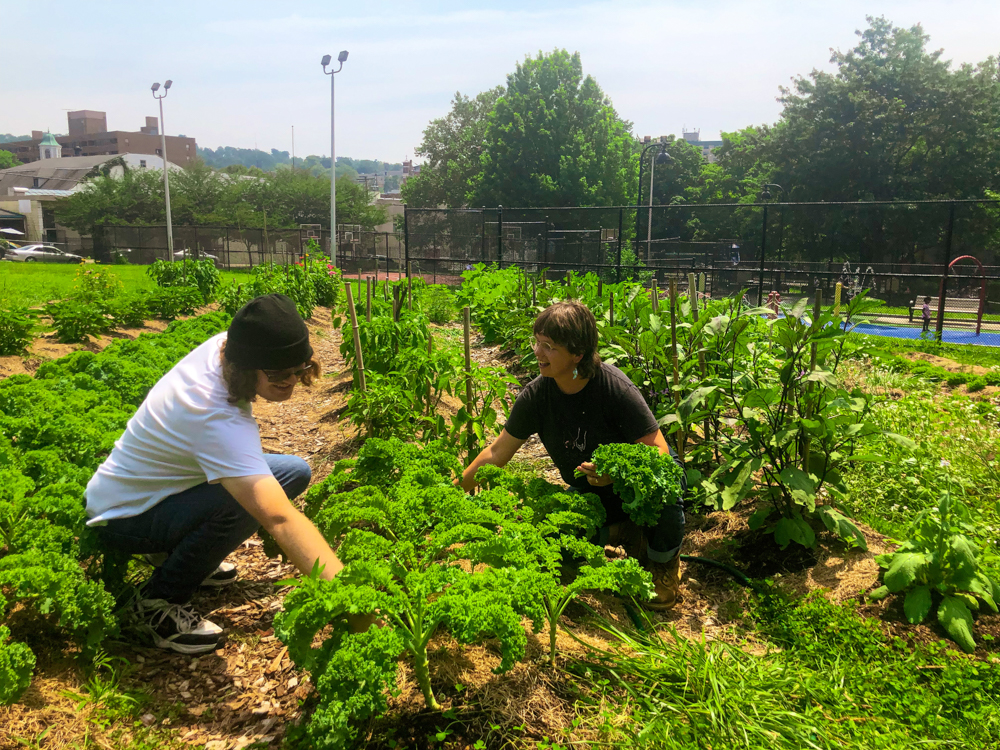 Jacob Nawy and Maeve McGee at the Peekskill Regeneration Farm (Photos by B. Cronin)

Stand at the shore of Crystal Lake and it feels like you are in the deep forest. A trail leads to the summit of Snake Hill, greenery abounds, and the din of insects and birds drowns out other sounds.

And yet, as Anusha Mehar points out, downtown Newburgh is two blocks away. “We’re hidden in plain sight,” says Mehar, who is one of two paid “regenerators” at the site, along with Katie Collins.

Seventy years ago, Crystal Lake was a hot spot for swimmers and boaters. But its fortunes, along with those of the city, began to decline in the 1970s. Ten years ago, a community cleanup removed more than 3 tons of garbage, including couches, refrigerators and tires. In 2017 Scenic Hudson entered into an oversight agreement with the City of Newburgh to guide its restoration. 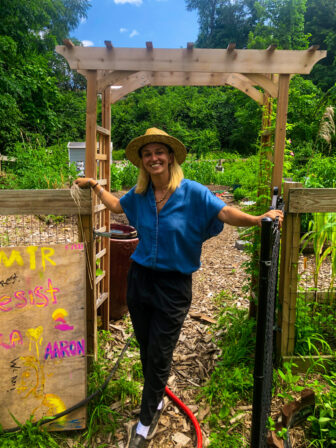 Today, the land has become a farm — the Sanctuary Healing Farm — behind an effort led by the nonprofit Ecological Citizens Project of Philipstown as part of its Regenerative Communities initiative.

Jason Angell, who co-founded the Ecological Citizens Project with his wife, Jocelyn Apicello, said that while, on the surface, the initiative is about farming, “at its core it’s about regeneration, the idea of creating and adding to.”

The couple trains regenerators at its Long Haul Farm in Garrison to work at farms in Newburgh, Peekskill and Yorktown Heights. Along with agricultural skills, the training covers self-sufficiency, community organizing and civic engagement.

The Ecological Citizens Project hopes that the farms will not only revitalize urban plots but become a nexus of community and civic engagement. The Peekskill and Newburgh farms, which are in their first full growing seasons, are tended by dozens of volunteers led by the regenerators. Volunteers help themselves to the bounty and also share produce with food pantries and others.

“It’s about bringing people here so that they can get a sense of what a full food cycle looks like,” says Mehar. “They can understand where it comes from and what it takes to tend.”

“It feels like something tangible,” says Jacob Nawy, who volunteers at the Peekskill Regenerator Farm. “I’ve been to a lot of protests, and a lot of it is immaterial. But this —” he said, looking at the kale he had just harvested. “At the end of the day, someone’s eating this.”

The principles of the project also apply to the soil. “Regenerative agriculture is about making it healthier after you’re done with it,” explains Maeve McGee, the regenerator at the Peekskill farm. “Conventional farming depletes the soil of all of its life and nutrients.” The regenerators and volunteers use compost and cover crops, work the soil without tilling, and eschew chemical fertilizers.

These methods also prevent carbon from being released from the soil, which contributes to global warming. “These techniques have been around for a long time, through all different cultures,” says Apicello. “But the recognition of how important they are in trapping carbon is opportune.”

Angell and Apicello are forging partnerships with municipalities to provide land to farm, which is what happened in Newburgh and Peekskill and means that apprentice farmers “don’t have to wait or figure out how to get a bank loan to buy 20 acres,” Angell said. “They’re thrown right into farming for their community.”

The couple also tries to recruit women and people of color to become regenerators, following the lead of Soul Fire Farms in Grafton and Rise & Root Farm in Chester, which are each run by African American women.

Collins, who is Black, and Mehar, whose mother immigrated from India, live in Newburgh. “In Punjabi culture, we’re used to being land stewards,” Mehar says. “It’s the bread basket of India. In my mom’s case, she said that growing up, if they didn’t grow it or skin it, they didn’t eat it.” 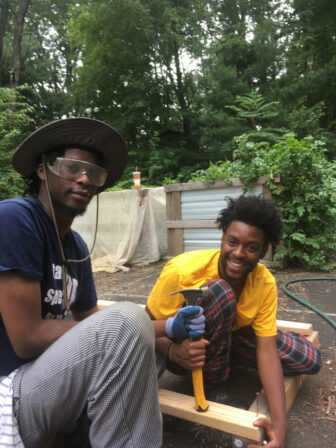 The Mosley brothers will soon take charge of the Peekskill farm. (Photo provided)

McGee grew up 10 minutes from the site of the Peekskill farm and this month will be passing her responsibilities to Aaron and Josh Mosley, brothers who are also locals. “There’s so many young people in this city who don’t have anything to do but walk around,” she says. “They said that when they were younger they would have loved to have had a place, nice and safe, where you can be sitting instead of Dunkin’ Donuts.”

One of the lessons for the regenerators and the volunteers is that farming can be challenging. The Newburgh farm has proven to be a welcoming sanctuary for groundhogs. Holding up a non-lethal trap, Mehar deadpans: “I’m hoping this will be a gentle invitation that they should be more regenerative in their own practice and buzz off.”

Earlier in the season, a sensory garden of native flowers and medicinal herbs was planted outside the fencing. Overnight, someone dug up and stole the plants. Community members urged Collins and Mehar to report the incident to the police, but, Mehar says, “that’s not the relationship we want to build with this land, or model with the community. Nothing about this space can be carceral.”

Instead, the regenerators and volunteers replanted the area with a “three sisters” system used by Indigenous peoples in which corn, squash and beans are planted close together to protect and sustain each other.

2 thoughts on “Regenerating Land — and People”