Margaret Vetare, who lives in Beacon, will perform folk music on the lawn of the Desmond-Fish Public Library in Garrison at 4 p.m. on Sunday (Aug. 15). 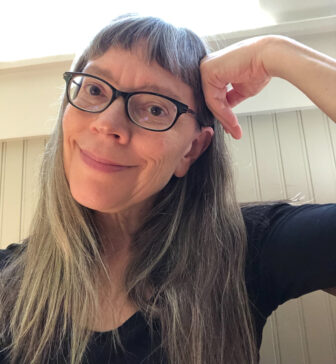 How you define folk depends on where you hang out, what the crowd is. Around here, there’s an earnest, long tradition of the folk revival movement. There’s a bias for singer-songwriters who write original material, so singing a cover at an open mic might be perceived as “less than.” Folk may well be a word that has lost its usefulness by being applied broadly. To the extent that I mostly play acoustic guitar and sing some traditional songs, I fit comfortably enough into many people’s perception of the term. But I like to sing so many things: Neapolitan love songs, English and Irish and Appalachian ballads, Rolling Stones songs, Stephen Foster, songs by medieval troubadours; it’s a long list.

Were you musical as a child?

I sang chorally from a young age, but I was interested in traditional music. As a teen I was discovering English ballads, listening to the English revival singers. I was checking out records from the Mount Kisco library, along with tomes of folk songs. I got deep into that early on. When I turned 10, I was allowed to walk into town by myself and go to the library whenever I wanted. At Oberlin College, I majored in English literature, with a concentration in medieval studies, but the music conservatory on campus was a big draw, and there were lots of opportunities to sing with other people. I also studied North Indian classical music. I was musically omnivorous and still am.

Did you ever aspire to make music professionally?

I never harbored any fantasies of a career, but along with the natural world, it’s a way for me of making shape of life. My day job for 30-plus years has been in museum education. I spent most of that time at historic sites and, more recently, at an art museum. At the historic sites, I researched and performed period music. At the art museum, there was a lot of inspiration in being surrounded by visual art, the moods the art evoked and the stories of the artists.

This will be your first solo concert. How are you choosing the songs?

When I sing with others, it’s about looking for songs with good potential for harmony, songs that work well with two or more instruments. Singing by myself, I’m thinking more of songs with strong words, supported by a strong melody, which also work well with my voice and its capacity as a solo instrument. I love to create a narrative around songs, giving them a sense of cohesion. I like songs that tell stories and convey something about being human. I’m very word driven. I love the economy that someone like Hank Williams uses to crystallize the human experience, but I love songs just as much that spin out language in poetic and expansive ways. I like to offer songs as a gift to move listeners to another reality.

How did this concert come about?

The library got in touch with me when I was working at the Frances Lehman Loeb Art Center at Vassar to organize a virtual visit to the museum. I was helping coordinate that and, somehow, [program librarian] Karen Thompson stashed away that I was a local person who played music. Karen asked if I’d be interested and, in a moment of delirium, I said yes. Later, it dawned on me that much of the music I sing or listen to is the result of time I spent and savored at my public library when I was growing up. I still sing songs I learned decades ago from LPs that I checked out because I liked the album covers. I have set poems to music from poets whose work I discovered by browsing the 800s section as a teenager. I will be working some of those songs, plus others related to literature, into the program to celebrate the venue.