Although Heather Guertin paints with oils — an age-old method — much of what she’s doing feels like a new language, says Jayne Drost Johnson of Ice House gallery in Garrison, which is showing Guertin’s abstract works through Sept. 11.

Guertin, 39, lives and works in Red Hook. She received her master of fine arts from The School of the Art Institute of Chicago and has mounted solo shows in New York City, Puerto Rico and Mexico City.

Since 2019, Guertin has been “using a new style and language of painting that started from the collages she was making,” Johnson says. “She finds images from magazines, journals, discarded books — they could be of flora, the landscape, anything, as long as it has an appearance or a texture. She combines them into collages, then uses the collages as a guide, translating the colors, textures and forms.”

The artist calls how she works “wet on wet” because she adds to the oil paint while it’s wet, which transforms the way paint sits on canvas. 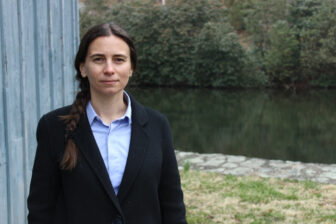 Jayne Drost Johnson, whose JDJ firm operates Ice House, has expanded with the opening in June of a gallery in Manhattan.

“I always thought I might like a satellite space in the city,” she says, although she had trouble finding a place with affordable rent before the pandemic shutdown.

“It’s a more traditional gallery space [than Ice House], and it’s nice to have the contrast,” she says. “There might be one show across both spaces, we’ll see, but I’m interested to use them in different ways. For some artists, it also presents an opportunity to work in a different scale. At Tribeca we did a show with all the artists who are in the gallery’s orbit, some on our roster, others not — a real friends-and-family show. The two galleries have a nice, symbiotic relationship already.”

It’s up to the viewer to make sense of the image. “They have a Rorschach quality to them as our eye and mind try to put together the marks she’s making,” Johnson says. Or, as Johnson writes in her notes for the solo exhibit: “What we think we see within the paintings is a creation of our mind’s eye.” She adds that the paintings “activate more than just your sense of sight. The more sensors get activated, the more the work sticks with you.”

Ice House is located at 17 Mandalay Drive in Garrison. The gallery is open by appointment; schedule a visit at jdj.world. The show is one of more than 60 highlighted for the Upstate Art Weekend that will take place from Aug. 27 to 29. See upstateartweekend.org.