All had called for governor to leave

On Tuesday (Aug. 14), Gov. Andrew Cuomo announced he would resign, effective in 14 days, following the release earlier this month of state attorney general’s report that concluded he broke state and federal laws against workplace sexual harassment.

Sandy Galef, a Democrat whose Assembly district includes Philipstown, at the time was among a group of Democratic women in the Assembly who called for an independent investigation; last week, with the investigation complete, she also said it was time for Cuomo to step aside. 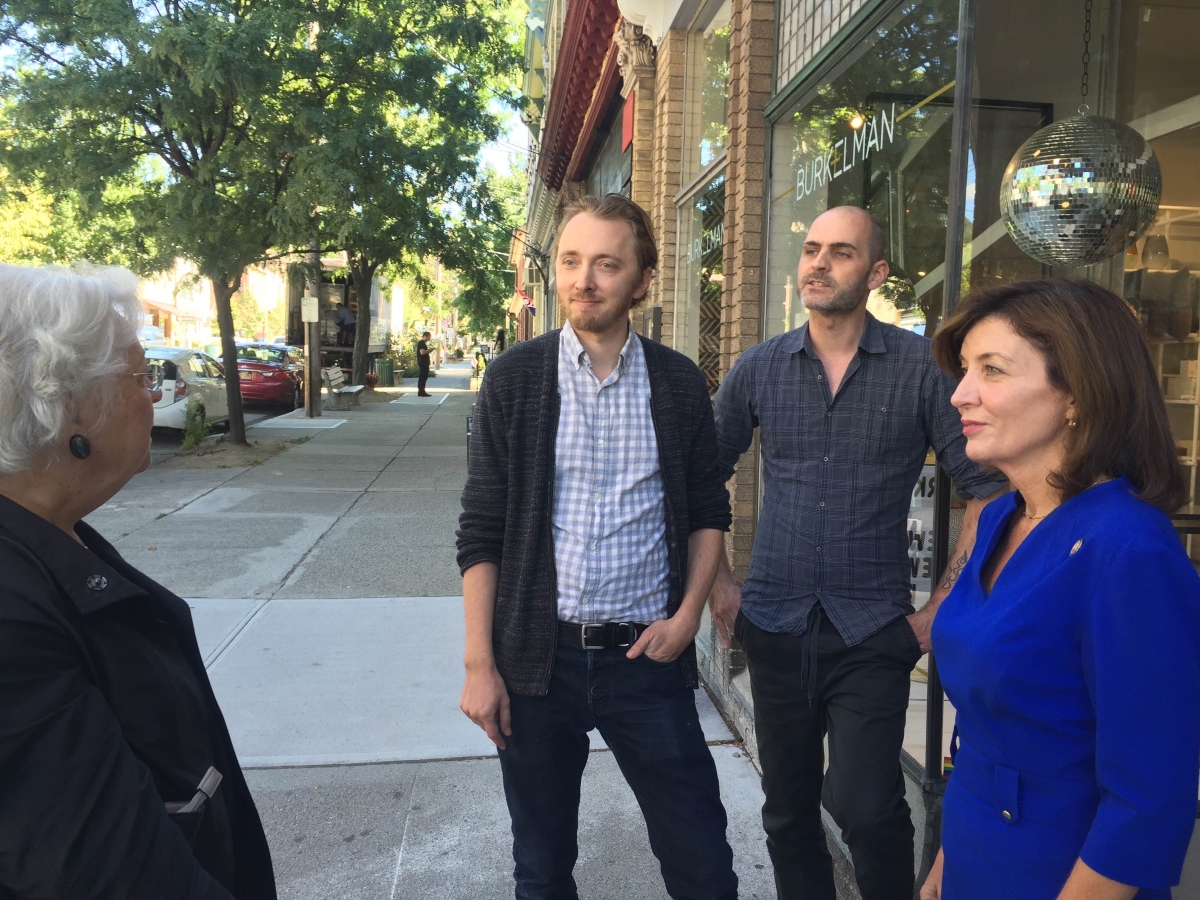 During a visit to Cold Spring in 2016, Lt. Gov. Kathy Hochul (at right) spoke with Assemblywoman Sandy Galef and David Kimelman and Kevin Burke, who were then retailers on Main Street. (File photo)

The governor, a three-term Democrat, also faced criticism over his administration’s handling of the spread of COVID-19 in nursing homes and the preparation of a memoir he wrote about his leadership during the pandemic. He will be succeeded by Lt. Gov. Kathy Hochul and become the first woman to hold the office.

Maloney expressed his support for Hochul on Twitter, saying he had “every confidence” that she “will meet the needs of this pivotal moment as we work to defeat COVID-19. She’s going to hit the ground running.”

Jacobson said in a statement: “Gov. Cuomo’s announcement that he is stepping down is the right one for New York. He no longer has the trust necessary to govern effectively. I have known Lt. Gov. Kathy Hochul for many years and have full confidence in her ability to lead the state. I look forward to working with her.”

Serino called the governor’s resignation “a small step toward restoring integrity in the Capitol” but said “there is immense work to be done to effectively restore public trust and ensure true justice and accountability for the victims of sexual harassment, and for all those who have been impacted by the Governor’s actions during the past 18 months, especially New York’s nursing home residents and their loved ones.”

She added: “How someone who stood so tall in the eyes of so many at the start of the pandemic can fall so far is a clear example of what happens when extreme power goes unchecked. It has never been more important to bring balance back to Albany to ensure that our government is one that truly works for the people of New York State. That starts by ensuring this governor has zero control over the transition process.

“As we continue to work to rebuild in the wake of the COVID-19 pandemic, we have incredible challenges still ahead of us, and I thank Lt. Gov. Kathy Hochul for stepping up to take those challenges on.”

The state Assembly also had started preparing an impeachment resolution. Had he been impeached, Cuomo would have been tried by a jury of state senators and judges from the Court of Appeals.

One thought on “Local Officials React to Resignation”