My great-grandmother, a lifelong gardener who always had fresh flowers on her table, blew my mind when I was a kid when she pinched leaves off a plant in her flowerbed and we put them in our mouths.

It was mint. Slightly spicy, a burst of flavor came from the little leaf on the plant with the tall, spikey, pink flowers.

She showed me how to rub my fingers on a leaf to discover the scent. We identified rosemary and thyme, too, that she had planted among the dahlias, gladiolus, iris and roses. I learned about herbs and how they could showcase the more serious flowers surrounding them. 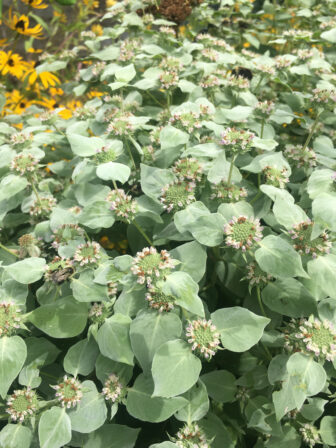 Many gardeners disregard mint for its cheerful propensity to make itself at home everywhere and anywhere once it is introduced to the garden. In memory of my grandmother, I’ve had at least a pot of it in all my grown-up homes. Now my daughter loves to pluck leaves from the mints, basil, sage, rosemary and other herbs that I mix into flowerbeds, as my great-grandmother did.

There are at least 600 varieties of mint, although I’ve never found more than five at any garden center. It’s hybridized so often that its precise names are not as important as choosing one that has the flavor and scent that you love.

It’s part of the Lamiaceae family, which has the distinct characteristic of four-sided stems. This family includes the genus Mentha (mint), Monarda (bee balm and bergamot), Lavandula (lavender), Nepeta (catmint), Agastache (anise hyssop), Pycnanthemum (mountain mint) and dozens of others, many native to the Northeast. Each of them that I’ve listed adds scent and fragrance to any planting.

I have several Menthas and two Pycnanthemums in my landscape, sharing space with more common perennials. Bees love them. They are powerful pollinator attractions. I’ve counted up to 11 different types of bees, wasps and butterflies on the mountain mint at one time. Goldenrod (Solidago spp.) is the only other plant I’ve observed with such impact for diverse species.

Mints are forgiving when it comes to cultivation. Most prefer full sun but will grow quite well in some shady spots. I’ve found that the pineapple mint left behind by the previous owner spreads enthusiastically while the spearmint stays in its place.

Mint spreads underground through rhizomes and when stems touch the ground they can form new roots. Removal isn’t tragic compared to something like an invasive mugwort or Japanese barberry, but any bit of root left in the soil can form a new plant. It has an elaborate root system.

I cut it back where I’m concerned that pulling it will damage nearby plants in a dense layout. It will re-sprout and I typically cut it back a couple of times in a season.

Deer and other animal foragers don’t like the scent or taste of mints. If you have a difficult planting location and heavy browsing, this is the plant for you. Planting it near roses can protect them from aphids.

I’ve dried it and stored it in dresser drawers and closets, made tea and cocktails, added it to salads and other dishes. I always have more than I need. It’s a useful herb both fresh and dried.

A book by Lesley Bremness, The Complete Book of Herbs, describes many medicinal uses, such as using essential oils for cold relief, but I don’t know if they are backed by any science. She advises cold mint tea to cure hiccups and flatulence. It’s just mint; there’s no harm in trying.

If you’re still on the fence, safeguard your garden by using a pot to contain the mint instead of letting it roam. Maybe there are children who will have their senses awakened when they learn about the edible plant hiding in plain sight among the prize flowers.

One thought on “Roots and Shoots: Ode to Mint”