In face of delta, pace picks up

New York began July averaging fewer than 17,000 first-time vaccinations a day, but in the past month, times have changed.

For the week ending Tuesday (Aug. 10), the rate of new vaccinations was 68 percent higher in the Mid-Hudson Region, which includes Dutchess and Putnam, and 74 percent higher statewide than the first seven days of July.

The biggest driver of new infections appears to be the delta variant of the virus that causes COVID-19, which health officials say is twice as contagious as the strain that launched the pandemic.

Another boost to vaccination rates may be coming: The federal Food and Drug Administration is expected in the coming weeks to give final approval to a vaccine made by Pfizer, which has been distributed under “emergency authorization” for anyone age 12 and older.

Vaccines made by Moderna and Johnson & Johnson also are being distributed to adults under emergency authorization. Full approval is granted following the completion of successful, late-stage clinical trials.

Dr. Anthony Fauci, director of National Institute of Allergy and Infectious Diseases, said on Tuesday (Aug. 10) that “there’s no doubt” that all three vaccines will eventually be approved and that more employers will be “empowered” to mandate the shots.

“This is very serious business; you would wish that people would see why it’s so important to get vaccinated,” he said.

Some people have gotten the message.

Between Aug. 4 and 10, an average of 29,271 people statewide received a vaccination shot each day, compared to an average of 16,810 during the first seven days of July, an increase of nearly 75 percent, according to state data. In the Mid-Hudson, the average rose to 2,777 from 1,651, an increase of 68 percent. 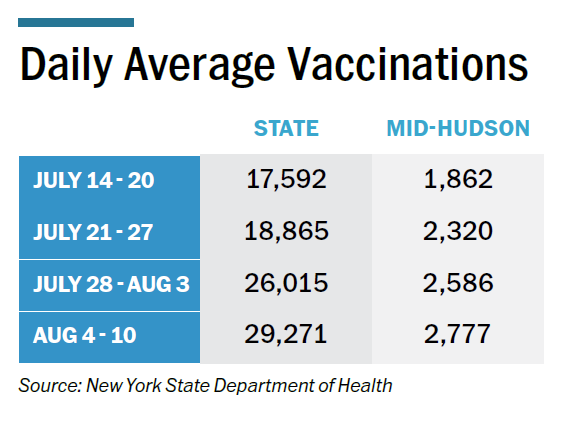 As of Wednesday, 61.3 percent of all Dutchess residents and 71.2 percent of adults had received at least one dose. In Putnam County, the totals were 66 percent and 77.4 percent.

Heidi Snyder, the co-owner of Drug World in Cold Spring, which has been administering Pfizer and Moderna vaccines, said on Monday that she has seen a recent uptick in vaccinations and testing. She sometimes asks customers why they are now getting vaccinated, months after the shots became widely available.

“They’ll say, ‘I waited long enough,’ or ‘I couldn’t take the pressure anymore,’ or ‘I got scared with the delta variant,’ ” she said. “Usually, it’s pressure from family.”

Hospitals and other private employers are telling their employees to get the shots; in May, the federal Equal Employment Opportunity Commission ruled that employers can legally require vaccinations, with allowances for medical and religious reasons.

NewYork-Presbyterian, whose system includes Hudson Valley Hospital in Cortlandt Manor and a medical office in Cold Spring, notified its staff on June 11 that they will have to receive their initial shot by Sept. 1 to remain employed. The mandate also applies to volunteers and vendors and will be required of new hires.

Vaccination rates for hospital workers as of Aug. 4 stood at 64 percent in Dutchess County and 56 percent in Putnam.

Last month, Gov. Andrew Cuomo said all state employees must be vaccinated by Labor Day or submit to weekly tests. About the same time, President Joe Biden said a similar policy will apply to federal workers and contractors.