The Philipstown Town Board last week adopted a resolution urging Putnam County to return part of its sales tax gains to towns and villages.

The resolution proposes that, in an “equitable” arrangement, the county distribute 50 percent of any increase in sales tax over the previous year, allocating funds to each village and town on a per capita basis. According to Angell, Philipstown would have received $140,000 from the county in 2019 under such an arrangement.

The board cited Dutchess County, which, under a 10-year agreement that expires in 2023, each year sends $9.6 million in sales tax revenue to Poughkeepsie, $4.2 million to Beacon and $11.3 million to the towns and villages. The cities receive more because they waived their right to collect their own taxes. 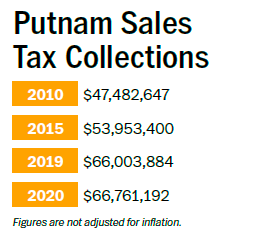 Sales tax goes first to New York State. The state sends a chunk back to each county, which, in most cases, returns a portion to towns and villages. Putnam is one of 11 counties that do not share the tax, according to the state comptroller.

The Philipstown resolution said that the lack of sharing puts local communities in the county at a competitive disadvantage with towns and villages in neighboring counties that receive sales tax revenue.

For years, Shea and other local officials have complained that Putnam does not return any sales tax. The county has responded that it provides towns and villages with services instead, such as covering unpaid municipal property tax, the costs of local elections and mandated funding of community colleges. It also operates a Sheriff Department substation in Nelsonville.

Last fall, county Finance Commissioner William Carlin noted that in early 2020 the state reduced the sales tax revenue it sent to counties and reallocated the money to the Aid for Municipalities program that benefits local governments. This “purported state aid is really a withholding of county sales tax,” he said.

In past years, Town Board members had suggested Putnam share its “surplus” sales tax, or the difference between the budget projection and the actual collection. Following that formula, in 2020 Putnam would have distributed just over $1 million among the municipalities, more than under the method proposed by the Philipstown measure.

Angell, who led efforts to draft the resolution, said on Tuesday (Aug. 10) that he had approached members of other town and village boards to gauge their interest. He said Nelsonville, Patterson, Kent and Southeast were open to the idea.

“In early October, we’ll pull together a meeting of all towns and villages that have passed the resolution and decide together the best next steps in approaching the county,” he said. During the Aug. 5 meeting, he expressed hopes for “a unified front. Every town and village has a self-interest, whether Republican or Democrat, in getting more community funding without raising taxes.”