Rain and wind expected on Sunday

The state began preparations on Friday (Aug. 20) for Tropical Storm Henri, which is forecast to bring heavy rain and high winds to the lower Hudson Valley on Sunday. The forecast for the Highlands calls for moderate winds and rain.

On Saturday afternoon, Gov. Andrew Cuomo declared a state of emergency in Putnam, Dutchess and 23 other counties in advance of the hurricane as its shifted toward a direct hit on central Long Island. The declaration ensures state resources can be provided to local governments, he said.

On Sunday, Cuomo said President Joe Biden had approved a disaster declaration for 26 counties, including Putnam and Dutchess, that will be impacted by the storm, which was expected to make landfall by noon. 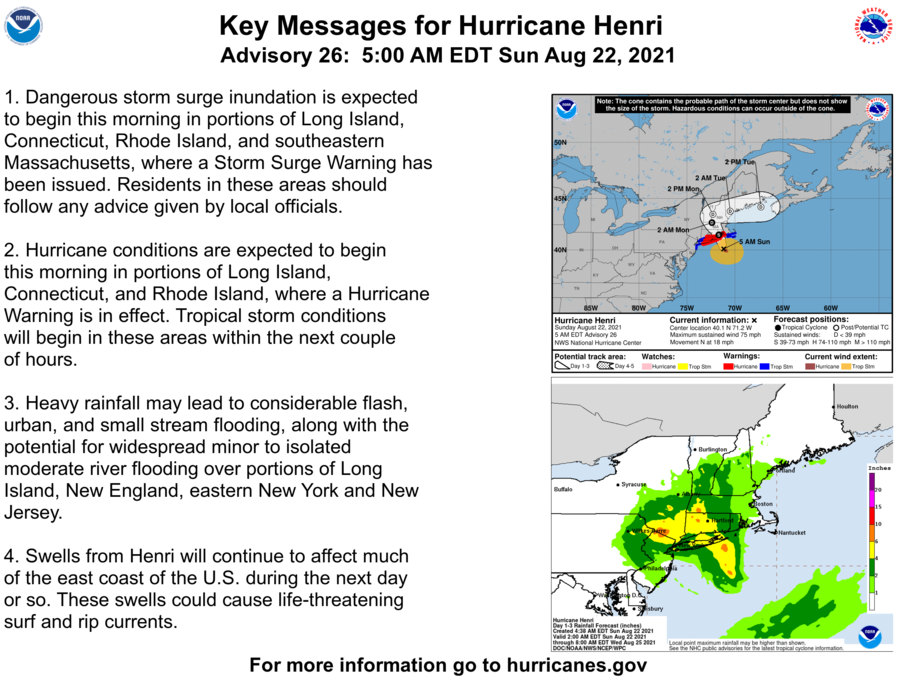 An update from the National Hurricane Center

Cuomo also activated 500 National Guard troops for deployment to Long Island and the Hudson Valley. The state Emergency Operations Center will be activated on Sunday morning, he said.


The National Weather Service on Friday issued a Tropical Storm Watch for Long Island and southern Westchester County. The Highlands were under a Hazardous Weather Outlook.

Central Hudson said more than 100 mutual-aid personnel were enroute to the area to assist with repairs and restore service, as needed.

The Beacon Farmers’ Market, usually held in the DMV parking lot from 10 a.m. to 3 p.m., said it would instead take place from 10 a.m. to noon at the VFW, 413 Main St. “Our farmers have already done their harvests and we don’t want to let the best of their summer stock go to waste,” organizers said.

Metro-North said it was suspending service on Sunday on the New Haven line and reducing service on the Hudson line to every two hours.