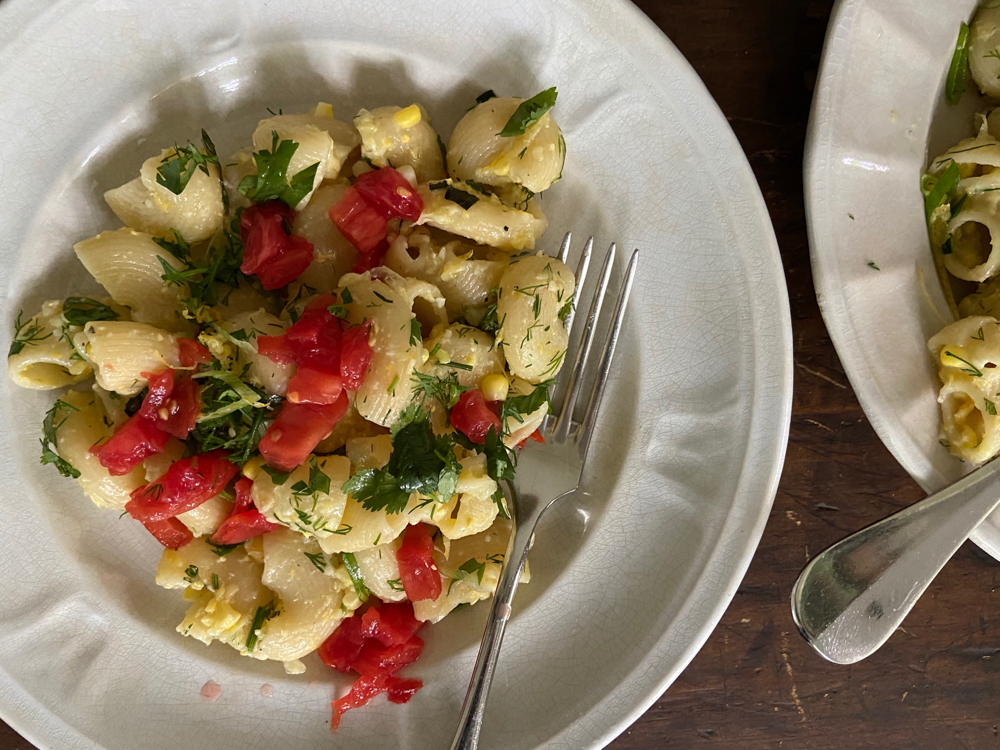 My husband and I ran into our friend Steve on Saturday at the farmers’ market. He was standing in line at one of the vendors, and after my husband had greeted him in a suitably friendly fashion, I grilled him as to what he was buying, and why. I can get a little one-track around food.

Steve’s reply (corn, shrimp) and reason (“This amazing dish we’ve been making…”) set my heart all aflutter. It is a time of year when I’m eager for variations on amazing, especially when they involve corn, or any other constituent of August’s influx of fresh produce.

When I was growing up in Indiana, corn was something you drove through. As summer wore on, the country roads cut deeper and deeper channels through the rising sea of flared green stalks, with their tassels grasping at the flat, hot sky. Like 99 percent of the corn grown in the U.S., this was field corn, the kind used to feed livestock as well as to do things like power automobiles, sweeten processed snacks, make glue stickier and make latex gloves less sticky (this last thanks to cornstarch). Only 1 percent of the corn that our country’s farmers grow is sweet corn — the stuff we eat fresh from the cob, frozen or canned.

The situation in Indiana in the 1970s wasn’t quite as bleak as the one New Yorker writer John McPhee found when he traveled through Florida’s orange groves in 1965. There, in a region that single-handedly produced more citrus than Spain and Italy combined, he could buy only orange juice that was made from frozen concentrate, even when he stopped at roadside stands advertising “fresh juice.”

A few Indiana farmers must have still been growing the sweet variety when I was a kid, because we managed to eat fresh corn every once in a while. I know this because I remember with a kind of wonderment that my sisters and I would run our hot corn cobs straight across the middle of an entire stick of butter, creating a messy swale in the perfect stick — a practice so boorish I can’t imagine my polite, frugal mother ever condoning it.

It’s been a long time since I’ve buttered an ear of corn using any technique whatsoever, having learned that fresh, young corn needs zero embellishment. But butter and corn remain a magical pairing. (Well, that’s not news, is it? Everything pairs well with butter.) I was reminded of these ingredients’ particular affinity when I tried the recipe that Steve sent me following our encounter on Saturday. That recipe was indeed amazing, just as billed. You can find it on The New York Times website (search for “shrimp with creamed corn and feta”), where you can also learn that 493 other readers also love it, and that several of them additionally wish that it wasn’t quite so time-consuming and/or high in fat. It’s a perfect dish for company, in other words.

But at the heart of that recipe is a smart technique for making a corn puree, one that’s adaptable for weeknight cooking. Indeed, later the night that I made it, I lay in bed dreaming up variations, perhaps with coconut milk and lime, or broth and lemon — and this is what I made for supper a few nights later, merging the creamed corn with one of my favorite, go-to, easy summer pasta recipes. Amazing plus simple feels just right at the moment.

1. Cut the kernels from each corn cob by standing it on end on a cutting board and slicing downwards. You should have about 3 cups total. Transfer 2 cups of kernels to a small saucepan; add the milk or broth, 2 tablespoons butter, plus a few dashes of salt and pepper. Bring to a simmer, cover and simmer gently until quite soft, about 12 minutes. When cooked, puree to a rough sauce with an immersion blender or food processor. Stir in the goat cheese and transfer to a large serving bowl.

2. Thinly slice the herbs. Combine with the scallion greens, the lemon zest and juice and 1 cup of the parmesan.

3. Meanwhile, bring a large pot of water to a boil, salt generously and cook pasta for 3 minutes less than the package directs. Add the remaining cup of corn kernels and the scallion whites, and continue cooking until al dente. Drain, saving ½ cup of the pasta water.

4. Toss the hot pasta with the corn mixture in the bowl, adding cooking water to keep the mixture loose. Add the herb and lemon mixture and stir to combine. Serve with fresh chopped tomatoes and extra parmesan on the side.