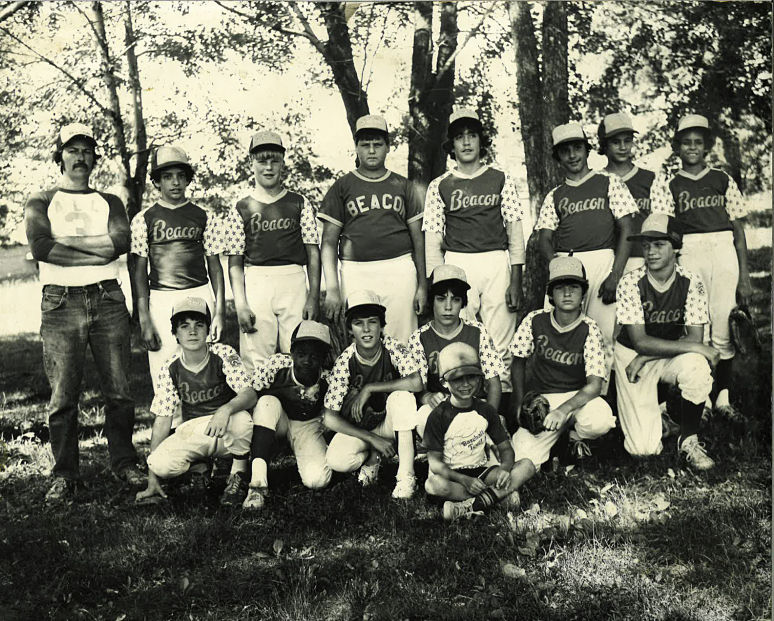 Before the trophies, the newspaper stories, the barnstorming by bus to the edges of the state, and the parade, the boys from Beacon played the game of baseball.

That is what Mike O’Leary remembers from that magical summer 40 years ago, when a team of bubble gum-chewing, bicycle-riding 11- and 12-year-old all-stars energized the city.

During July and August of 1981, the team had a run of victories that included the city’s first district title in more than 20 years, its first state championship and a shot at the Little League World Series in Williamsport, Pennsylvania.

Their success became the city’s: A school board member donated a bus for the team to use; residents and businesses donated money for hotels and other expenses as the team traveled the state; and fans piled into buses and traveled hours to see Beacon win the state championship.

The run began on July 11, 1981, when on a hot day in Beacon, Efren Gonzalez hit a grand slam and doubled; Tony Sedore pitched a two-hitter and struck out nine; and Jim Sonko hit a three-run homer in a 13-0 blowout of LaGrange West to begin the District 17 Little League tournament, which included 25 teams from Dutchess and Putnam counties.

“I don’t really remember being under a lot of pressure,” said O’Leary, now a software engineer in Cary, North Carolina, outside of Raleigh. “We were having fun playing baseball.”

A year earlier, many of its players had played on a Little League all-star team that fell a game short of the District 17 title. During the 1981 Little League regular season, they had faced each other while playing on separate teams but knew each other away from the diamond, said John Trimmings, who played first base.

“After we started practicing together, we did have a feeling that we were pretty good,” he said.

They had reason to feel confident. Beacon stormed through the District 17 tournament, with easy victories over Millbrook South (16-2) and Fishkill (15-1), a 2-0 win over Hyde Park American and a slugfest that Beacon won, 13-7, against East Fishkill. The tournament was double elimination, meaning that Beacon would face the winner of the bracket of teams with one loss. That was Wappinger, the defending champs.

Wappinger won the first game, 3-2, setting up a second game to determine the champion. Beacon led that contest, on July 28, 1981, 2-1, in the top of the sixth and final inning when a Wappinger batter hit a home run to tie it. But in the top of the extra inning, Beacon scored three times and held on to win, 5-2.

“Wappinger was the best team we played all along,” said O’Leary.

The players celebrated at a new Burger King in Fishkill and then “went back to the field” to prepare for the state tournament, Coach Bill DiNapoli told the Poughkeepsie Journal at the time. 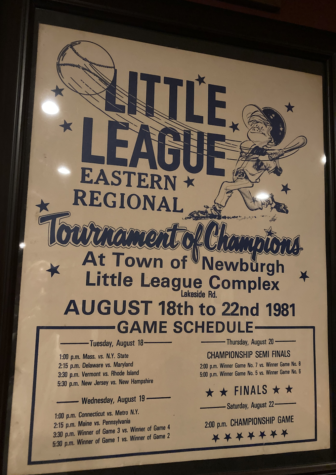 Ed Sablinski, now an officer at the Fishkill Correctional Center, framed a copy of the poster for the Eastern Regional tournament held in August 1981.

Neil Gallagher, a member of the Beacon school board, donated a bus for the team. Libby Funeral Home and Harry Coris, the owner of the Dutchess Manor Restaurant, were among the businesses that provided money for hotels and food. When the team needed $1,000 to travel to the championship game in western New York, supporters raised more than $4,000.

The team was “creating a sense of pride not only in the city but in the young people in the city,” Mayor George Tomlinson told the Journal.

Bonnie Sablinski said her husband estimated the couple and their two daughters drove 3,000 miles that summer following the team and their son, Ed Sablinski, an infielder, catcher and pitcher. For one game, they had to pick up Ed from summer camp in Roscoe, drive him to a game and then return him to camp, she said.

“There were hotels and meals out, and most of the parents were always there,” she said.

The boys horsed around and played cards during long bus rides and in their hotel rooms. On the field, they swept through the state tournament, defeating Latham (2-1), Massena (8-1) and Rome (10-0) to reach the state finals in Friendship, a town 75 miles southeast of Buffalo. Four buses made the 280-mile trip for the title game against Liverpool: one carrying the team and three carrying fans.

The game started on Aug. 15, 1981, but was stopped after two innings because of rain, with Beacon leading, 1-0, on a run scored by O’Leary. The next day, he scored a second run after he walked, stole second and advanced on two passed balls.

In the fifth inning, with the game tied, 2-2, Trimmings doubled and scored on a hit by Gonzalez, giving Beacon the state championship and sending the team to the Eastern Regional tournament and a shot at the Little League World Series.

The team stopped at the mayor’s house after arriving in Beacon late that night, said Trimmings. The next day “half of Beacon” attended a parade for the team, the league president, John Donnelly, told the Journal in 1982.

“We were rock stars,” said Trimmings.

The enthusiasm only grew two days later, when a record crowd of more than 3,000 attended Beacon’s opening game in the Eastern Regional tournament at the Town of Newburgh’s Little League complex. Beacon took a 12-1 record into the single-elimination tournament, which included 11 other teams, and was the only team that did not have to travel. Its first game, at 1 p.m. against the state champs from Massachusetts, was televised by WFTI Channel 54.

O’Leary led off the game with a walk and scored Beacon’s first run. The team would score six more times before the second inning was over.

“Everything was going our way early on,” said O’Leary. “I think we were already looking to the next game.”

Sablinski, who had three hits in the game, relieved starter Mike Pratt in the fourth inning and allowed two runs to score and Massachusetts to tie the game, sending it into extra innings. Massachusetts broke the tie in the seventh inning with a bases-loaded single off pitcher Tony Sedore, and won 8-7.

Sablinski still has a framed photo of him walking off the mound. 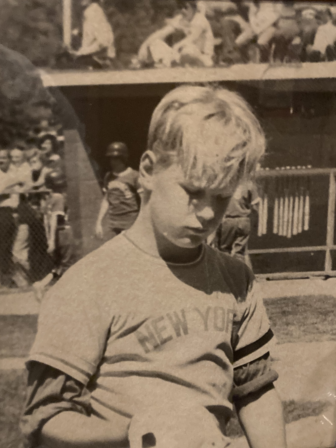 A dejected Ed Sablinski walks off the mound following Beacon’s 8-7 loss to Massachusetts in the Eastern Regional tournament in 1981. (Photos provided)

“You could see how deflated I was,” he said. “When you lose your first game, and that game means you’re done, that’s big.”

Sablinski, now a lieutenant at Fishkill Correctional Facility, the state prison in Beacon and Fishkill, and O’Leary are among several players from the team who played for Beacon High School.

Trimmings, who played for Spackenkill High School after moving out of the district, is a contractor who operates a food charity with his wife in Saratoga County. He began coaching youth baseball when his son was old enough to play. For two years running, he coached an all-star team from the Town of Wilton that lost to the eventual winner of the state championship.

After one of his players threw a perfect game, Trimmings rewarded him with the baseball he kept from a perfect game he threw in a Beacon Little League game.