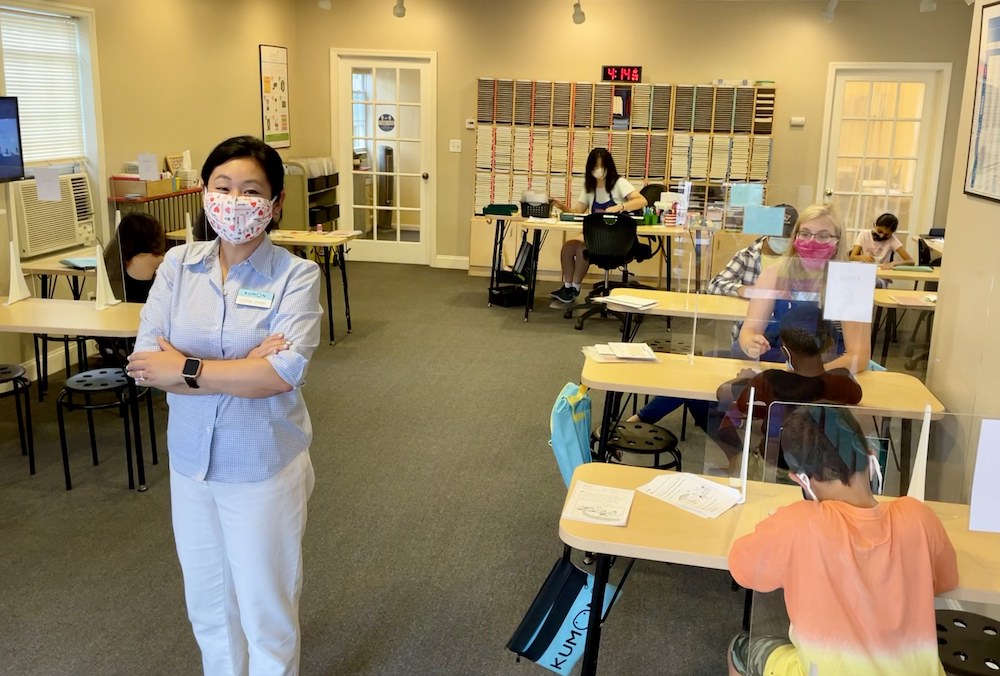 Lydia Chan is the owner and instructor of the Kumon Math and Reading Center in Beacon. (Photo provided)

For new businesses, making it through the first year is cause for celebration.

For the Kumon Math and Reading Center and its owner and chief instructor, Lydia Chan, it was more of a mixed bag. After opening on Main Street in Beacon in July 2019, she had to close for a few months at the start of the pandemic in early 2020. She reopened for in-person learning on the anniversary of her launch, and last September began to see an uptick in students.

“Many parents had realized that from March to June their kids had learned barely anything, especially the little ones,” Chan said. “Having children sit in front of a computer all day [for remote learning] is hard to do. Even circle time [for younger children] is challenging.”

Kumon, which is a franchise, is an “education enrichment program” based on twice-weekly visits with a minimum six-month commitment, Chan said. It was created in Japan in the late 1950s by a high school teacher who developed the methods while working with his son; the first U.S. branches were established in the 1980s. Today there are 26,000 centers, including 2,200 in the U.S.

A native of Singapore, Chan holds a master’s degree in education policy and law from Teachers College at Columbia University and worked for the New York City Department of Education, largely on policy initiatives.

Before moving to Cornwall three years ago, she was a project manager, helping schools integrate children with disabilities into classrooms. The classroom setting was not quite what she expected, so she began looking for a better fit as an educator.

When a child enrolls at Kumon, “we start out with a placement test, identifying where the gaps are,” she said. “It’s a holistic approach, which includes a lot of building consistency in study habits.”

The student commits to about 20 minutes a day in homework per subject. “If you want to run the New York City Marathon, you have to work up to it,” Chan said. “You do a little bit of exercise every day. It’s a beautiful thing to see students catch up to grade level, and the goal is to get them a bit ahead of grade level.”

One focus of the program, Chan said, is focus. “We use worksheets, and we work on learning to finish the work within a half-hour. The sheet is graded and the child corrects it; that’s the cycle, and it tells me if they understand the concept. If they can’t finish it, together we figure out what’s not working.”

Unlike a common pedagogy, Kumon doesn’t require students to “show the steps” in solving math problems. “It’s ‘show me the answer,’” Chan said. “Parents are surprised by that. The point is they have to figure out what the next step will be, and that skill requires a significant amount of focus.

“This is a lifestyle change; you have to want to do it, and it’s hard, but the joy is in slowly seeing the student’s attitude changing,” she said. “We start the students at the level that’s ‘just right’ for them, where they will see those perfect scores and want to go on to the next step. We move with them.”

Before the pandemic shutdown, Kumon instruction in Beacon involved in-person sessions conducted after school. The center is now open on Tuesday, Wednesday, Thursday and Saturday while continuing to offer virtual access by Zoom on Tuesday and Thursday.

Chan has attempted to replicate the feeling of the physical space on Main Street in the virtual environment. “Part of why parents don’t like Zoom is it’s so isolating,” she said. “I gave a lot of thought as to how we could mimic the classroom at home. I have a classroom assistant who is working remotely, so I can move around and not be stuck behind a desk. I have a TV screen hooked up to an Apple Mini so I can keep an eye on the [remote] kids. I’ve set it up so Zoom students are looking at the classroom; they can see their friends on the screen, and it feels more open.”

Kumon begins instruction at age 3 with “pencil skills, print awareness from top to bottom,” and extends through high school, although “to catch a high school student up takes a long time. I’m up-front with parents: If you’re looking for SAT prep, you’re probably looking for a tutor. We focus on the foundation.”

Chan said she believes many parents are waiting to see how school goes when it begins next month. “Parents are slightly in denial, hoping kids go back to five-day, in-person school,” she said, despite an uptick in COVID-19 cases. “The positive is that Zoom has worked well for us. It’s not what Kumon was known for, but it has shown us that we can do Kumon anywhere, anytime.”