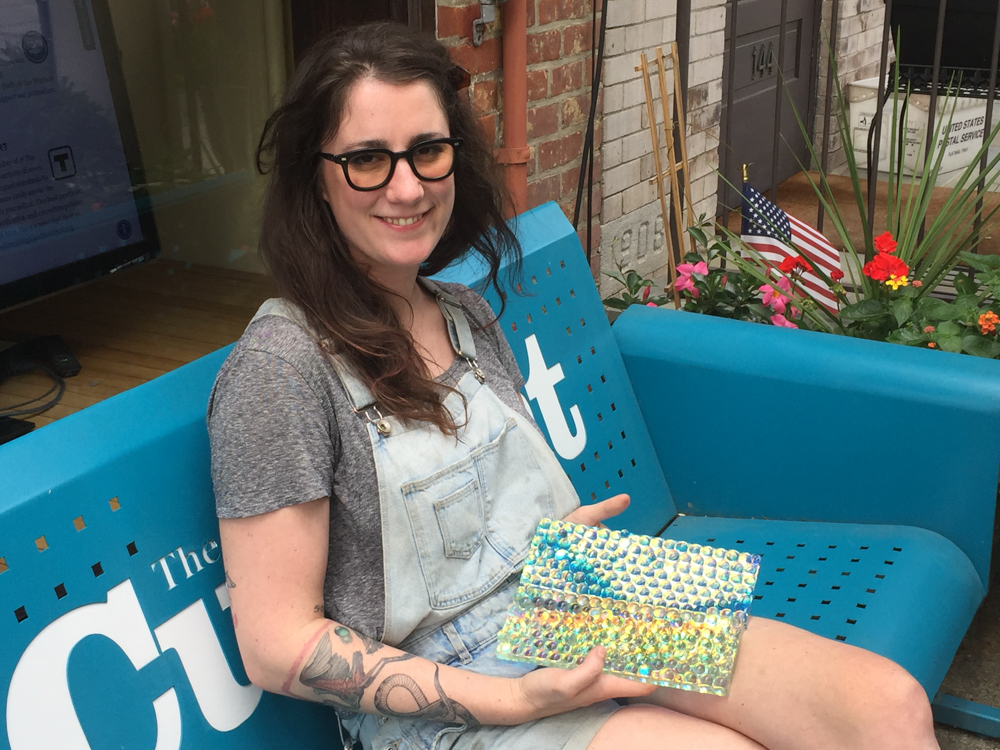 Melissa Schlobohm holds one of her marble pieces. (Photo by A. Rooney)

Artist experiments with light and resin

Melissa Schlobohm calls her upcoming show, Let the Light In, which opens at the BAU Gallery in Beacon on Sept. 11, “cohesive in terms of materials, though not necessarily in subjects.”

The artist cites a few examples:

“Portraits of my grandmother — her image viewable in parts through glass”

“Prints covered with marbles, with opaque resin underneath”

She discovered resin in early 2019 after breaking her hand in a fall on ice. “My [other] thumb became infected, so I had no hands for six months. Resin didn’t require as much; you need a mix and a heat gun, and you put objects in.”

The result was a show called Beauty Found, Beauty Wrought, which was “a collection of things I picked up on my travels across the U.S., having my friends empty their junk drawers,” she says. “I made story-like, I Spy-like pieces with objects and colors, figuring out how to play with light and resin.”

Next, Schlobohm became obsessed with marbles “and how they hold light and illuminate things underneath them.”

“I’m experimenting with layering glow-in-the-dark resin, reflective materials and marbles,” she explains. “I’m trying to create surfaces that will hold and produce light, and where at every angle the appearance of the piece changes. I also want to use resin in ways that change your perception of objects and textures from nature, that is, placing things in unconventional containers like cylinders and domes that give a fish-eye effect.”

She adds: “Sometimes my pieces are weird and quirky, but I find them beautiful. I love functional art: making furniture, making things that are fine art but can be used in a home, like backsplashes. I have all these ideas: prints, mass-produced wallpapers, custom clothing, using some of the prints as fabric.”

She also is writing a book. “It’s animal puns on human relationships, with perforated pages for framing prints. They’re pretty funny and dark.”

After earning a bachelor’s degree in studio art from Skidmore College, Schlobohm stayed in Saratoga Springs for a year but found galleries there unreceptive to her work. “They were just selling landscapes and horse paintings,” she says.

She moved to Beacon about eight years ago to live with four artist friends and began experimenting with other mediums, from printmaking to sculpture, which was tricky because ceramics didn’t engage her and metals were expensive.

“I like repetitive things,” she explains. “For instance, I made an 8-foot-high beehive, with hand-cut, tapered bricks that went around the hive.” Another favorite project was creating “swarms of bugs and thousands of butterflies from colored sheets, cutting them out and collaging them using repetitive motions.”

She relocated to Hyde Park about 18 months ago, seeking more space and more quiet. “I like that there’s nothing much going on,” she says. She has maintained her affiliation with BAU, calling it the “last Beacon-run gallery,” noting “there were 13 when I came.” The back of the gallery has been renovated and her show will be the first presented there.

Schlobohm says she is still finalizing which pieces will be included. “I keep making these discoveries,” she explains. “Resin often conjures up boring, ‘crafty’ applications, and I’m getting somewhere, with research and development, that’s not that. I want to properly document it before sharing it. It’s a new medium.”

Holding one of her marble pieces, Schlobohm admits to not being sure what to do with it. “It’s a tile, I think, but what is it? I can’t make it a table, because it’s not flat. Should I sell them individually, or put a few in a frame? I’m having a conundrum over how to display them.

“I don’t want to force the person buying them to do any one thing. People can have it on their table or wall. I didn’t finish it in any way that implies there’s something you should be doing with it. I don’t have to give the answers. But it’s all fun.”

The BAU Gallery, at 506 Main St. in Beacon, is open from noon to 6 p.m. on Saturdays and Sundays, or by appointment. See baugallery.org. The show continues through Oct. 10.