For years, Dana Bol has worked as a freelance film editor, shaping and telling largely commercial stories. Now she’s expressing her own stories through the lens of painting.

“The base layer of muslin on Masonite, the plaster, is a ‘build,’ a narrative line,” she explains from her artist’s studio on Main Street in Cold Spring, which doubles as her living space and editing room. 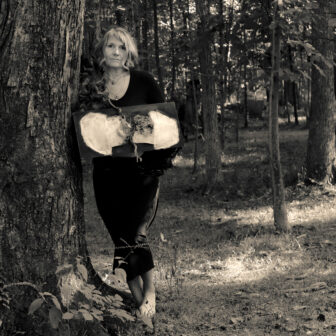 When she began painting, Bol did many self-portraits — “I looked like an old, wizened Dutch woman; I had all these hats.” After she moved from New York City to Beacon and then Cold Spring, her work became more abstract (“Rothko-esque”) but turned to nature, inspired by the bark, branches, twigs and stones she found on walks. Today, Bol’s works are largely sculptural, created with found objects.

“The Masonite gets sanded, then I use muslin and plaster if want texture,” she says. “It gets toned with linseed oil and oil paint, and birch bark and beads and twigs get attached. I try not to overwork it; I have to make myself stop. The works are not framed; they float off the wall, which to me gives them the sense that they’re not so precious.”

Bol earned degrees in English literature and film studies at the University of Colorado, Boulder. “I started with speech pathology but took a film class and fell in love with it,” she says. After graduation, she moved to Manhattan, determined to break into the industry.

“This was in the 1980s, when jobs for women in the field were scarce,” she recalls. She began at the bottom, as a messenger delivering reels. After four years, she had become an editor; because the industry was transitioning away from film, she had to learn motion graphics, animation, compositing and other digital skills.

Then she changed course. While running a film company, she spent a summer in Berlin to attend the Goethe Institute, experience the city, learn German and “hang out with grad students — although I was 42.”

Near the end of her stay, she took advantage of a cheap flight to visit Gran Canaria in the Canary Islands. “There were 5,000 deck chairs and people fighting over all of them,” she says. “It was not at all what I envisioned. So, instead, I took this rickety little bus up into the top and hiked in this amazing canyon.”

Back in the U.S., she hired a guide in the Shawangunk Mountains and started rock climbing. “Climbing gave me an incredible amount of self-confidence,” she says. “I decided I didn’t have to support the [New York City] apartment and I would sell everything and alter my life. It was very much, ‘I can’t do it anymore, I’m done.’ ”

Bol returned to school, this time at Parsons School of Design, where she earned an associate degree in experiential space design, which she describes as “an emerging field combining 2D imagery and 3D space: things like creating walls out of sound, immersive building spaces. It included taking my special-effects film work and incorporating that into 3D. There I started painting and drawing, with the backing of supportive professors.”

At the same time, Bol moved north and began working for a Poughkeepsie nonprofit. She paid the bills with film projects in the city while “slowly pushing my way into doing documentary and feature narrative work.”

The walks continue. “I started looking at the textures and the colors, how the wet stones turned purple in different forms of weather,” she says. “I’ve taken a lot of photos, too. My work has evolved into more found objects — adding things, making things with more structure. My intention is clear to me, but I love that everyone looking at it is going to have a different response, through their filter. It’s memory — it’s your own stories.”

Bol will open her Cold Spring studio to visitors each Saturday in September from 2 to 5 p.m. Call or text 917-570-5353 for an appointment.

One thought on “The Artist Next Door: Dana Bol”