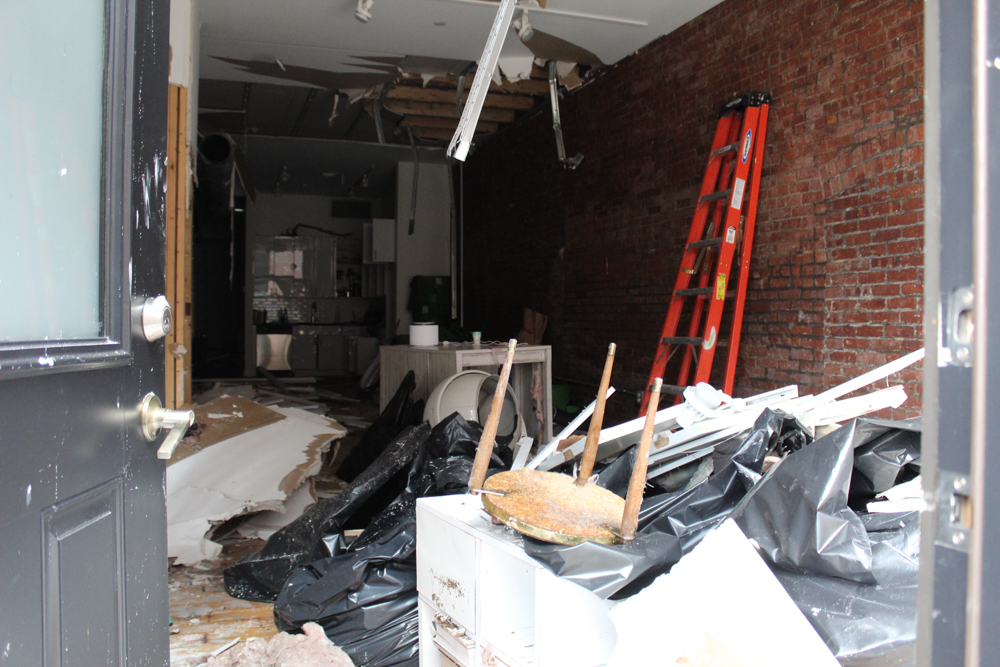 Chad Wagner and Steven Gray's apartment at The Lofts at Beacon was among several units that suffered significant water damage from Ida. (Photo by L. Sparks)

First the sky opened up, then so did the ceiling of Chad Wagner and Steven Gray’s apartment at The Lofts at Beacon.

Photos the couple posted on Facebook show water pouring down its stairs and from the ceiling as rain from Tropical Depression Ida, which struck the Gulf Coast as a Category 4 Hurricane and then weakened as it headed northeast, pummeled the Hudson Valley on Sept. 1 and 2.

The ceiling “crashed” around 11 p.m., filling the apartment with water that lifted and carried appliances, said Gray. 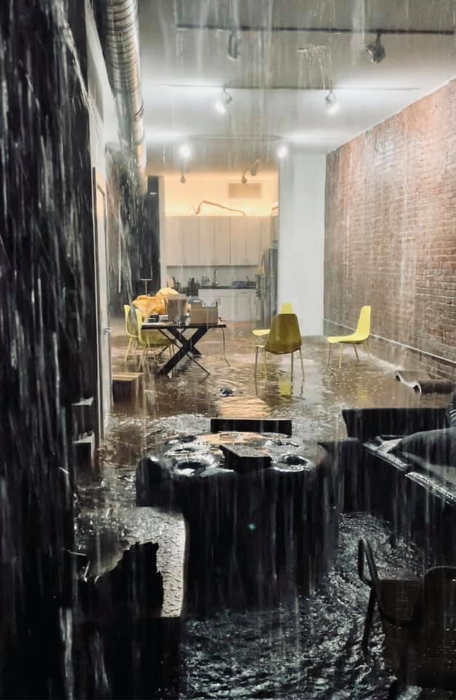 Water cascades through the ceiling of the apartment. (Photo provided)

“We only had 10 minutes before our refrigerator burst through the windows — then our couch, then our keyboard, then our coffee table,” he said.

More than a week later, the storm is gone but damage remains.

As individual renters and property owners like Gray and Wagner work on insurance claims, officials in Beacon and Philipstown are assessing damages for possible reimbursement from the Federal Emergency Management Agency, which on Sept. 3 issued an Emergency Disaster Declaration for Dutchess, Putnam and 12 other counties in New York. The declaration made those counties eligible for emergency aid such as equipment and reimbursement for shelter support.

U.S. Rep. Sean Patrick Maloney, whose district includes Beacon and Philipstown, said he and other members of New York’s delegation in Congress have twice written to President Joe Biden asking that the declaration be extended to Dutchess, Putnam and Orange counties.

Philipstown had substantial damage in two areas, both on East Mountain, said Supervisor Richard Shea on Tuesday (Sept. 7). In one area of East Mountain Road North, a “normally placid stream and waterfall became a torrent and leapt its bank undermining the road and causing its collapse,” he said. Off East Mountain Road South, Trout Brook jumped its banks and destroyed a section of road.

“We will be applying to FEMA for the repair of these roads,” said Shea.

How to Get Help

Dutchess County has launched an online portal where businesses and residents can upload information on damages or losses from Tropical Depression Ida, including estimates on the cost of repairs or replacement. The information is being used to determine the county’s eligibility for a Major Disaster Declaration from the FEMA.

The city Water Department had to undertake a substantial cleanup and repair to Pocket Road, and the Fire Department pumped out nearly three dozen basements, but damage was otherwise minor, he said.

The toll was more severe on Mason Circle at The Lofts at Beacon, where Gray and Wagner’s apartment was part of a row of living spaces and artist workshop spaces damaged by water.

The couple, who run a photography business called TheGingerb3ardmen and a candle and crystals business called Les Loups De La Lune, said they lost cameras, lighting equipment, packing materials and other equipment and supplies. Firefighters arrived as they slogged through water to rescue items, and told them to leave, said Gray. One firefighter asked Gray where his shoes were.

The next day, neighbors and staff from The Lofts’ management office began helping Gray and Wagner look for salvageable items, and found their wallets, car keys and passports. The complex’s management also moved them to a vacant apartment on the property.

Wagner said they are “overwhelmed with gratitude.”

“It was the worst night, and the worst morning, but then it ended up being like, ‘Wow. We’re OK,’ ” he said.