The fire tower atop Mount Beacon kicked off its 10th decade by showing off a little. 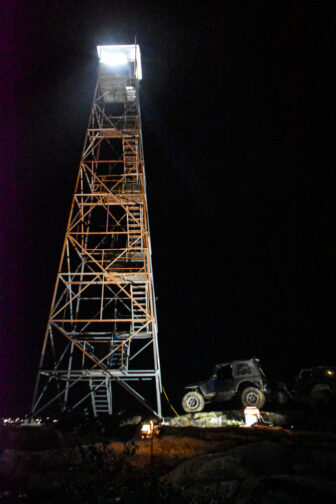 The Beacon Fire Tower, illuminated (Photo by B. Cronin)

On Saturday night (Sept. 4), the 90-year-old tower was illuminated for a half-hour, starting at 9 p.m. More than 25 other fire towers across the state joined in at the same time, from Sterling Forest near the New York-New Jersey border, to towers in the Adirondacks. The occasion was the Eighth Annual Lighting of the Fire Towers, an event sponsored by the New York chapter of the Forest Fire Lookout Association.

None of the fire towers in New York are still actively used in fire spotting, Laurie Rankin, the director of the New York chapter explained, but it’s important to keep them in working condition because they may be called back into action someday.

“If we were to have drought conditions for three or four weeks in the Northeast, like they’re seeing out west, could the same thing happen here?” she asked, in reference to yet another summer of huge wildfires. “Absolutely.”

That may seem far-fetched when considering the wet and soggy summer we just had, but in the past 15 years there have been three wildfires that each burned at least 3,000 acres in the Shawangunk Mountains, and Rankin said the fire tower at Roosa Gap was used as a command center. Pennsylvania recently built 16 fire towers, figuring that they would be a cost-effective way to keep an eye out for blazes in heavily wooded areas with few people and poor cellphone service.

“I grew up on top of a mountain, hanging out at a fire tower,” she said. As an adult, she became passionate about hiking and was delighted to learn that there were so many towers across the state she could hike to. That led her to the Forest Fire Lookout Association.

The method of illumination for each of the towers last weekend differed. For many of the remote towers in the Adirondacks, volunteers had to use only what they could carry during a hike that took several hours, which meant Coleman lanterns and collapsible work lights.

To light the Beacon tower, Rankin got in touch with the members of Hudson Valley 4 Wheelers, who have repaired the tower over the years, including with steel left over from the construction of the Walkway Over the Hudson in Poughkeepsie, to make the tower safe to climb. The crew brought up a 6,500-watt generator and six strips of LED lights.

At 9 p.m., as Louis Armstrong’s “What A Wonderful World” played from one of the Jeeps, the generator was turned on and the fire tower blazed to life. Since the crew had last been there earlier in the summer for repairs, an unknown visitor had strung fake ivy in the cab at the top of the tower. Between the bright lights and the leafy green strands, it resembled an illicit basement greenhouse.

At 9:15, the lights of every tower were flashed several times, in the hope it would be easier for all of the illuminators to see each other from a distance. We didn’t spot any other blinking lights, but once the Beacon tower started flashing, a plane across the Hudson started heading toward us. “I hope they don’t think this is a runway,” said Gennodie.

We may not have been able to see any of the other towers, but we knew where Rankin was. She was serving as the illuminator atop the tower at Balsam Lake.

“When they see that light go on, I want them to think: ‘There was a man or a woman in that fire tower, in that lonely spot for years, looking over where I am right now and protecting the homes and the business and the forest,’ ” she told me before the event. “Because where you are would look significantly different if they had not done that.”