For more than seven decades, the bridge on Sprout Brook Road in Garrison has been attacked by multiple foes.

The weight of personal and commercial vehicles, storms that are becoming more frequent and powerful because of climate change, the waters of Canopus Creek and time have corroded the 27-foot span’s steel girders, eroded its concrete to expose rebar and eaten into the footings of the bridge’s abutments.

Two years ago, in a report by TRIP, a research organization based in Washington, D.C., that focuses on transportation issues, the bridge was one of two in Putnam County and 25 in the Hudson Valley with the lowest ratings for the condition of their decks and supports. (The other is the Oscawana Lake Road crossing over Peekskill Hollow Creek in Putnam Valley, built in 1964, which the county said on Sept. 15 it planned to widen.)

The damage at Canopus Creek is so bad, that Putnam is in the process of completing a design for a new 28-foot replacement, with construction scheduled to finish by September 2023 at a cost of $1.6 million. 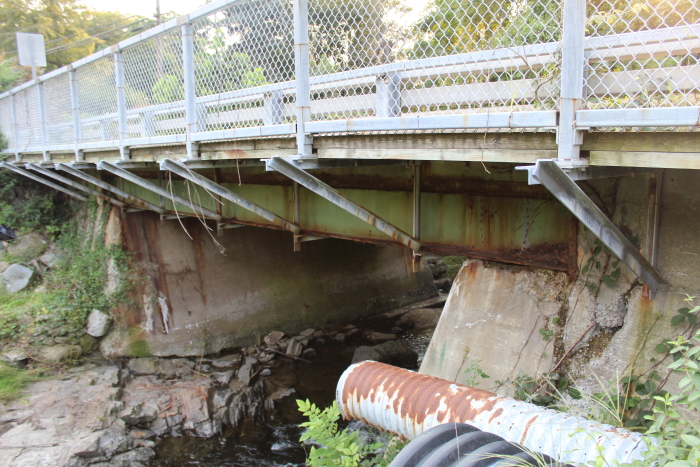 The 86-year-old bridge carrying Sprout Brook Road in Philipstown over Canopus Creek is scheduled to be replaced at a cost of $1.6 million. (Photo by L. Sparks)

The project highlights both the stresses on local bridges and the importance of state and federal funding to maintain, repair and sometimes replace structures that in some cases are more than a century old.

One of the Highlands’ most-attractive features — a collection of water bodies ranging from the Hudson River to small creeks and streams — requires bridges catering to an ever-growing variety of users, including residents, vacationers, trucks hauling merchandise and buses ferrying students and workers.

The region’s network of crossings includes six bridges in Beacon and 14 in Philipstown, according to the state Department of Transportation. They range from the bridges carrying traffic on Route 9D and Churchill and East Main streets in Beacon over Fishkill Creek to multiple bridges and culverts in Philipstown that traverse Clove Creek and the bridge on 9D spanning Indian Brook in Garrison.

More than half of the state’s bridges are owned by local governments, and many are at least 70 years old.

Besides the crossing on Sprout Brook Road, the only other local bridge rated in poor condition is the one in Cold Spring on Lunn Terrace, which is owned by Metro-North. The agency said this week it has no maintenance scheduled.

Under state law, bridges in New York must be inspected annually, and their condition is ranked on a scale that ranges from 0 (closed) to 9 (excellent). The bridge where Route 9D crosses Fishkill Creek in Beacon, built in 1933 and owned by the city, has a rating of 5, meaning it is in “fair” condition, according to the National Bridge Inventory, a database overseen by the Federal Highway Administration. 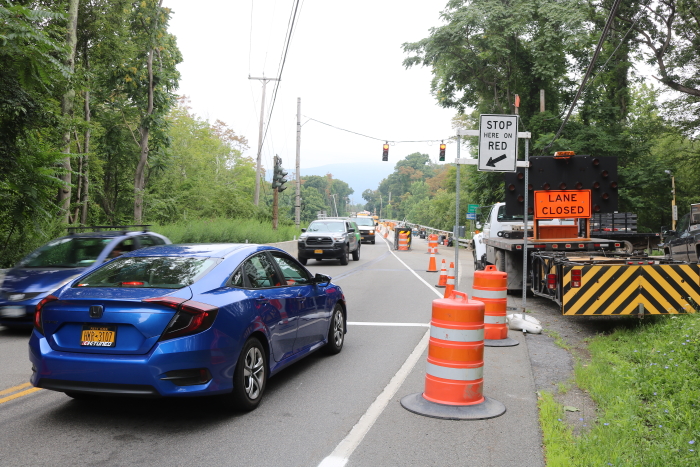 In 2019, the state spent $2.2 million on repairs to the Indian Brook Bridge on Route 9D, which was a single lane for much of the summer. (File photo by Michael Turton)

The condition of the span where 9D crosses Indian Brook in Garrison is also rated as fair, although the state spent $2.2 million in the summer of 2019 to replace joints, add a drainage system, repair piers and abutments, seal the deck and pave its approaches. Still, the Federal Highway Administration has recommended the bridge be widened and its deck rehabilitated a cost of $25.8 million. It also recommends spending $11.6 million on the Route 9D crossing over Fishkill Creek in Beacon.

Carl Frisenda, the Philipstown highway superintendent, says that while he usually chooses one bridge each year to include in the budget for repairs, the town’s bridges are in good shape.

The most recent major work was on the span on Horton Road over Clove Creek where the footings were being washed out and the stonework was crumbling. The steel undergirding also needed maintenance. And last week, a hole appeared in a 15-foot span on East Mountain Road North, just past the Beacon reservoir. Highway crews noticed the hole before Tropical Depression Ida brought heavy rain to the area on Sept. 1 and 2, but the storm “opened it up,” said Frisenda.

“We’re going to have to patch that for now until we figure out what we’re dealing with,” he said.

In 2016, Hudson Valley Pattern for Progress surveyed 132 municipalities in the Hudson Valley, including some in Dutchess and Putnam counties, asking each to rate the conditions of their roads and bridges.

37 percent of respondents said their bridges needed only routine maintenance

22 percent said some bridges were in danger of imminent failure

55 percent said their roads were in “poor” or “fair” condition

While fixes and upkeep of the Bear Mountain and Newburgh-Beacon bridges are funded by tolls — the deck on the westbound span of the Newburgh-Beacon Bridge is being replaced in a project scheduled for completion in July 2023 — counties and municipalities like Beacon and Philipstown have to rely on their own residents and whatever state and federal funds they can secure. Putnam is underwriting the design and construction costs for the Sprout Brook Road bridge with $1.5 million it received through BridgeNY, a state program created in 2016 to fund bridge and culvert repairs. Philipstown mostly pays for bridge work using town funds, said Frisenda.

“There’s stuff that I would like to do, but it’s a limited budget,” he said.

Those budget constraints affect every municipality in the Hudson Valley, where 13 percent of the 2,251 bridges that are 20 feet or longer are in poor shape, with significant deterioration of the decks, supports or other major components, according to the 2019 assessment by TRIP. 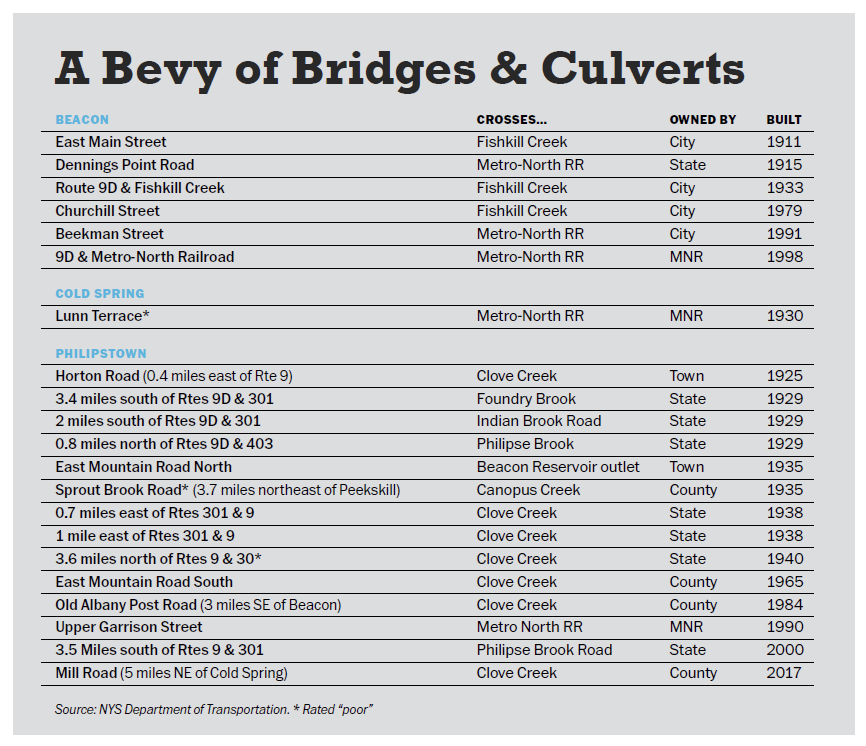 The American Road & Transportation Builders Association, using federal data, estimates repairs totaling $3.2 billion are needed on 1,676 bridges in the 18th Congressional District, which includes the Highlands. Of those, 194 are “structurally deficient,” according to the association.

BridgeNY’s third round of funding, announced in January, has $150 million available for local bridges, or $50 million less than in 2018. The infrastructure money expected to come from Washington could close the gap. The $1 trillion bill passed by the U.S. Senate on Aug. 10 that awaits action in the House includes $1.5 billion for bridge repairs in New York state. More than half the funding, $550 billion, is new money, including $40 billion for replacement, repair and rehab.

“Once you start falling behind, it gets hard to catch up,” he said. “That’s when you start posting bridges [to limit capacity] and closing bridges. In most cases, they’re either way past their useful life or they were built so long ago they didn’t have the kind of traffic that they do now.”

The Greatest Bridge Ever Built

And the Cold Spring woman behind it

The Brooklyn Bridge, which opened in 1883, is considered an architectural marvel, and the woman who led its construction for years, Emily Warren Roebling, was a native of Cold Spring. 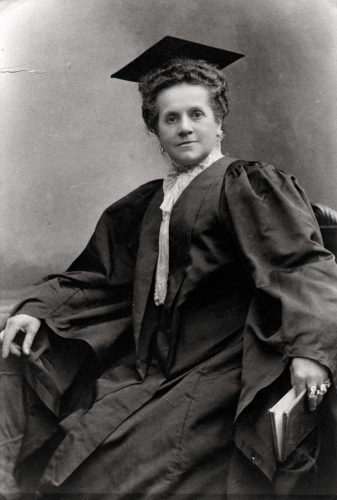 Emily Warren Roebling, after receiving her law degree in 1899

The bridge linking Manhattan and Brooklyn was designed by John Augustus Roebling, who died in 1869 from an injury he received while surveying the site. (He developed tetanus after his foot was crushed.) His 32-year-old son, Washington, took over as chief engineer but developed “caisson disease” (decompression sickness) when he ascended too quickly from the dry underwater space where the foundations were being dug to solid rock.

He was bedridden for most of the next 14 years, watching the construction in the distance from his window, while his wife, Emily, became the de facto supervisor of the project.

Born in Cold Spring in 1843 as the second youngest of the 12 children of Sylvanus and Phebe Warren (six of whom survived to adulthood), Emily attended prep school in Washington, D.C. She met her husband in 1864 at a soldiers’ ball; he served on the staff of Gen. Gouverneur Kemble Warren, Emily’s brother.

Emily was the first person to cross the completed bridge by carriage, carrying a rooster as a sign of victory. 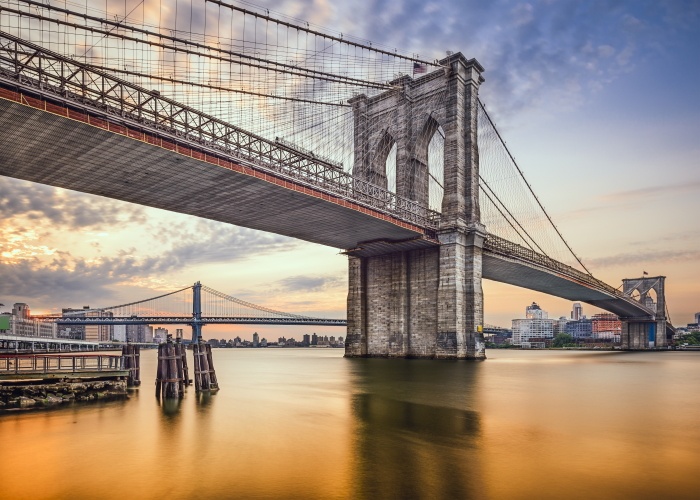 She died of stomach cancer in 1903, at age 59, at the couple’s home in Trenton, New Jersey. She and her husband, who died in 1926, are buried under runic crosses in the Cold Spring Cemetery. The 1840 home on Fair Street where Emily and Gouverneur and their siblings grew up still stands.

Although BridgeNY has awarded $450 million to 179 bridge and 118 culvert projects since 2016, and is an “important source of work,” only 36.6 percent of requests for bridge money and 13.4 percent for culverts were approved, said Geiger.

Each municipality gets funding from the CHIPS program under a formula, Geiger explained. The program is flexible, allowing money to be spent on roads, bridges, culverts or equipment, he said. Municipalities spend the money and apply for reimbursement.

The state budget passed by lawmakers in April was “particularly good” for local road and bridge funding, said Geiger. It increased funding for CHIPS by $100 million to $538 million and for the EWR program by $35 million, to $100 million.

“Things are getting better; we’re hoping that we continue that level of funding, and that level of commitment, going forward,” he said.