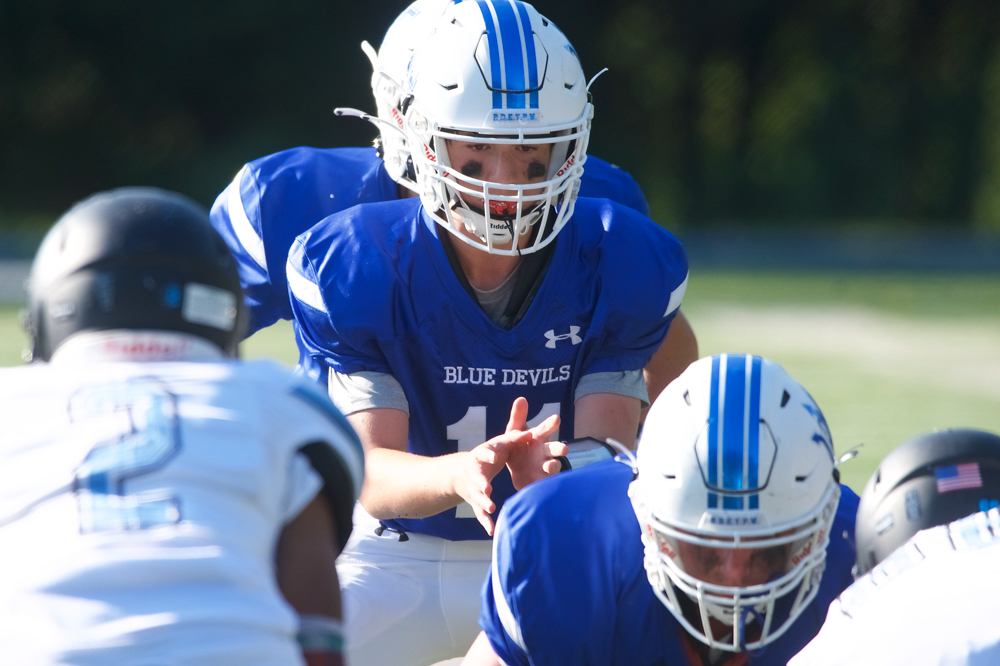 Ryan Van Tassel made his varsity debut for Haldane at quarterback, completing 5-of-11 passes. (Photos by S. Pearlman)

After an opening quarter of feeling things out, the Haldane High School football team went to work, putting 24 unanswered points on the scoreboard by halftime en route to a 38-0 victory over Rye Neck on Saturday (Sept. 11) in its season opener at home. 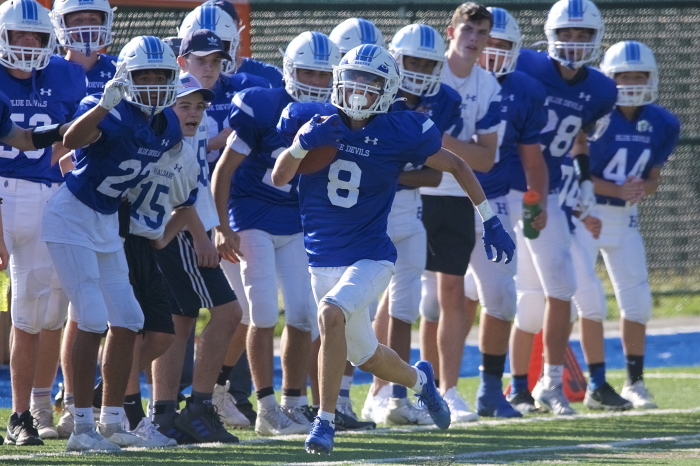 Sophomore running back Evan Giachinta led the way with a pair of touchdowns and 101 yards rushing on 18 carries. Senior Giancarlo Carone also scored on a 70-yard run, and sophomore quarterback Ryan Van Tassel made his varsity debut, rushing for a touchdown (TD) and completing 5-of-11 passes for 63 yards. Junior corner Tommy Tucker also returned an interception 50 yards for a TD. 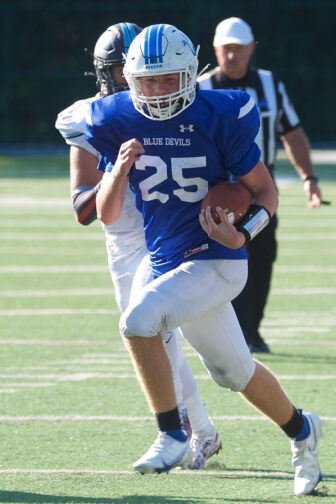 “I’m excited about how the kids prepared and played the game,” said Coach Ryan McConville. “On offense there were some nerves early in the game but in the second quarter we found our rhythm. Van Tassel threw some screen passes and got comfortable, and our offensive line did a great job creating holes” for Giachinta.

McConville said he was also impressed with his defense. “Rye Neck is a good team, and that was our first shutout in three or four years,” he said. “Our linebackers — Erik Stubblefield and Jake Mason — ate it up; Rye Neck was unable to run at them. Our secondary also did a great job, and [senior cornerback] Soleil Gaines had a great game.”

The Blue Devils (1-0) will travel to Hartsdale on Saturday afternoon (Sept. 18) to take on Woodlands High School (0-1), which lost 33-0 last weekend to Tuckahoe.

On Friday (Sept. 10), Beacon High School picked up a 10-0 victory at home over Kingston, with the Bulldogs’ defense forcing four turnovers.

Owen Lynch kicked a 26-yard field goal and quarterback Jason Komisar rushed for 91 yards, including a TD, and completed 6-of-12 passes for 24 yards. Ahmir Bell added 28 yards on the ground, and Jayden Quintana had a fumble recovery.

“We played good defense, ran the ball and won the turnover battle,” said Coach Jim Phelan. “We wanted to come out and establish the run and control the tempo of the game, and we were able to do that.”

Beacon (1-0) will travel to Staatsburg tonight (Sept. 17) to face Roosevelt High School of Hyde Park (1-1). The game will be streamed at nfhsnetwork.com.