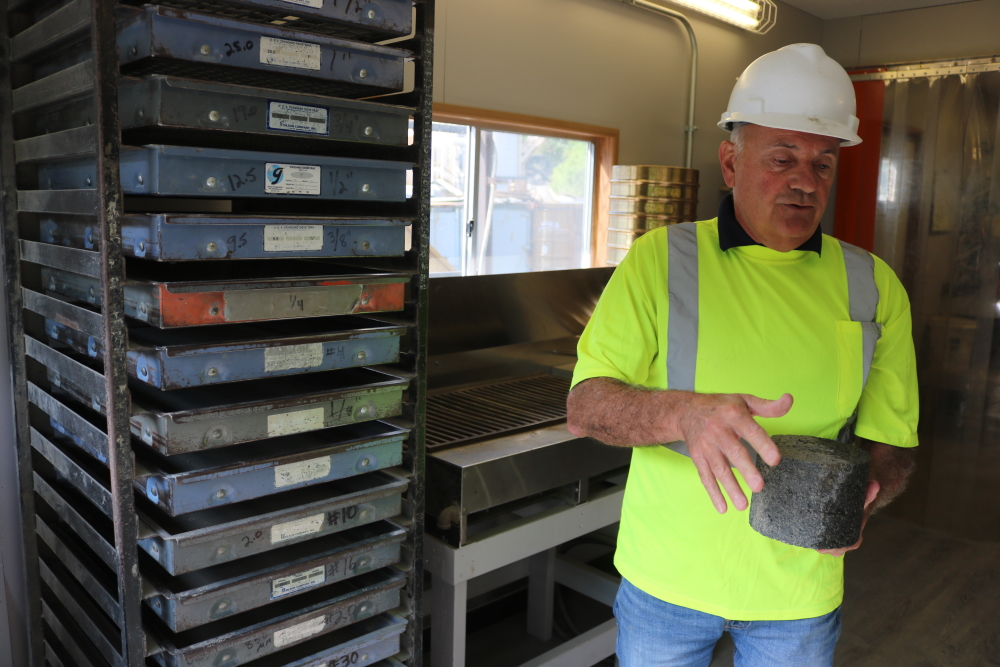 John Amato of Thalle Industries holds a core removed from newly laid asphalt to test its durability. The quarry, located on Route 9 in Fishkill, provides much of the asphalt and crushed stone used to build or repair local roads. (Photo by Michael Turton)

As Congress prepares to send billions of dollars to repair and repave the country’s highways and roads, local officials say routes in the Highlands are generally in good shape. A state database shows mostly routine maintenance being planned for Dutchess and Putnam counties, including paving sections and repairing retaining walls on Interstate 84 and the Taconic State Parkway.

In Beacon, the city has a multiyear plan in place to repave the road and build new sidewalks along Teller/Fishkill Avenue (Route 52), from Wolcott Avenue (Route 9D) to the city’s northeast boundary. The city is nearing completion of right of way acquisitions to install new storm water drains, after which the two-year project is expected to go out to bid in 2022, said City Administrator Chris White.

Following the completion of “bump-out” curb extensions at six intersections, the city also plans to mill (remove the top layer of asphalt), pave and restripe Main Street this fall.

“Quality roads are one of the real foundations for quality of life. Unfortunately, in some places you have to choose your route not based on what’s the shortest trip but based on what will do the least damage to your car.” ~Assembly Member Jonathan Jacobson

Highway Department crews typically mill and pave 10 to 20 road sections each year, depending on weather and what’s needed, said White, who will present a one- to two-year capital plan to the City Council later this year.

Beyond dam repairs and the renovation of the Tompkins Hose fire station — higher-dollar projects that have been in the pipeline — he doesn’t expect it will include any surprises. “I’m benefiting from years of thoughtful investment,” he said. “The state of repair of our infrastructure is much better than when I was here in the mid-1990s” as a council member.

The condition of the 42,700 miles of highway maintained by New York State has begun trending downward after holding steady since 2015, according to a report by Comptroller Thomas DiNapoli. Between 2019 and 2020, he noted, the number of highway miles rated only poor to fair jumped 4.4 percent.

Beacon’s Main Street was constructed in the late 1800s and early 1900s, when the automobile was a novelty. But these days, with the city and many of its businesses thriving, delivery trucks routinely slow traffic on the narrow, mile-plus-long artery.

White said he anticipates further evolution, as people depend more on public transit to get from the riverfront Metro-North station to Main Street. This month, the city submitted an application for a $10 million state Downtown Revitalization Initiative grant with highlights including a public bus connecting the river and Main, a series of transit- and walker-friendly pocket parks along Main Street, and the creation of bicycle boulevards linking parks, schools and commerce.

“The good thing is that people want to be on Main Street,” the city administrator said. “As it gets congested, it encourages non-motorized transportation. Maybe you don’t need to take your car to get a gallon of milk. Congestion isn’t always the worst thing.” 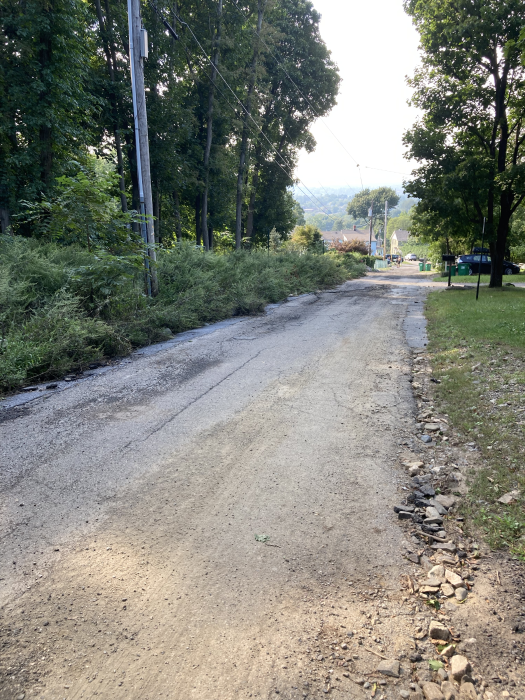 If an infrastructure bill is passed, White said that in addition to wastewater, sewer and dam upgrades, he would use federal dollars to offset the city’s 20 percent share of the Fishkill Avenue/Teller Avenue project. Beacon could also address rebuilding Pocket Road, a steep and narrow road on the city’s east side that gives way to trails leading to one of its three reservoirs, he said. White estimated that project would likely cost $200,000.

Less than 10 miles away, Highway Superintendent Carl Frisenda oversees an entirely different animal in Philipstown, with 30 miles of blacktop and 30 miles of dirt roads.

While Frisenda estimates that most municipalities manage road networks that are at least 90 percent blacktop, many Philipstown homes sit on steep, skinny dirt roads that have been the subject of debate for decades.

Many residents would like to see the roads paved, citing the expense of maintenance. Others oppose paving, citing the roads’ rustic appeal and arguing that they slow traffic.

Regardless, “I have a crew on them every single day,” Frisenda said.

Workers begin each spring to rebuild the roads by adding gravel, raking them and using compactors to pack the materials together. But huge storms, like the “remnants” of Hurricane Ida that tore through the region earlier this month, wreak havoc. 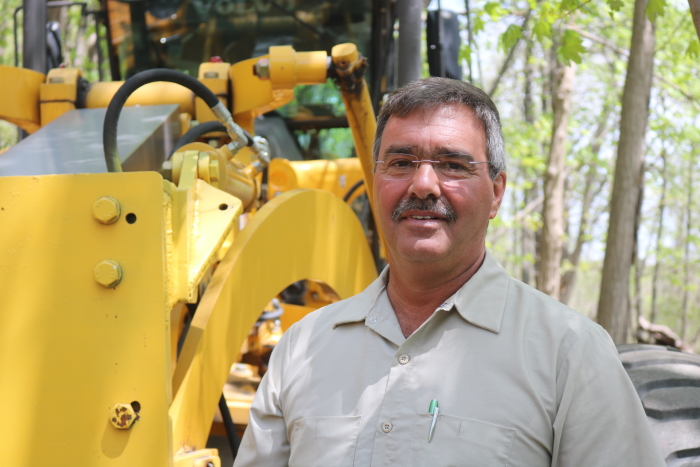 “When we get massive amounts of rain, water and dirt don’t mix,” Frisenda said. “Years ago it wasn’t as bad because you didn’t have as much traffic.” But now, with the proliferation of delivery trucks and other vehicles, “the amount of traffic on these back roads is crazy.”

Last year, the town paved 1,100 feet of dirt road, connecting East Mountain Road South and North. If increased federal funding makes its way to the Highlands, Frisenda said one priority would be to realign the problematic intersection of South Mountain Pass and Route 9D.

To address the Highlands’ crowded roadways, Dutchess County Executive Marc Molinaro said he would rather see money invested in projects that are the product of regionally coordinated planning. For example, he points to the bottleneck at the Route 9D/Interstate 84 interchange just outside of Beacon, which, at rush hour, can leave cars backed up nearly to City Hall.

“That interchange is actually something that can be remedied,” he said. “We have, what, six lanes of bridges? That interchange had the capacity at a time to make connectivity under 84, to connect the City of Beacon to 9D, underneath and near Dutchess Stadium. Those are all planning steps that the federal government doesn’t engage in and the state government doesn’t help with. And then local communities are left to try to catch up.”

Assembly Member Jonathan Jacobson, a Democrat whose district includes Beacon, said he asked the DOT in 2019 to convert one of the northbound lanes at the interchange to a second lane turning left onto I-84. The agency said it couldn’t add a second turn lane without widening it, but instead installed “smart” stop lights that could be adjusted for rush-hour traffic.

Jacobson said the jury is still out on the lights, since commuting plummeted soon after their completion behind the pandemic shutdown. “The technology is in but we don’t know how to adjust it to see if it will work because we’re not at the old levels of commuters.”

The state Department of Transportation keeps a running tally of its projects, their costs and deadlines. As of Wednesday (Sept. 15), the list contained 1,696 projects in the planning stages or under construction, including 253 in the Hudson Valley, 60 in Dutchess and 51 in Putnam. Below are examples of construction and maintenance contracts. 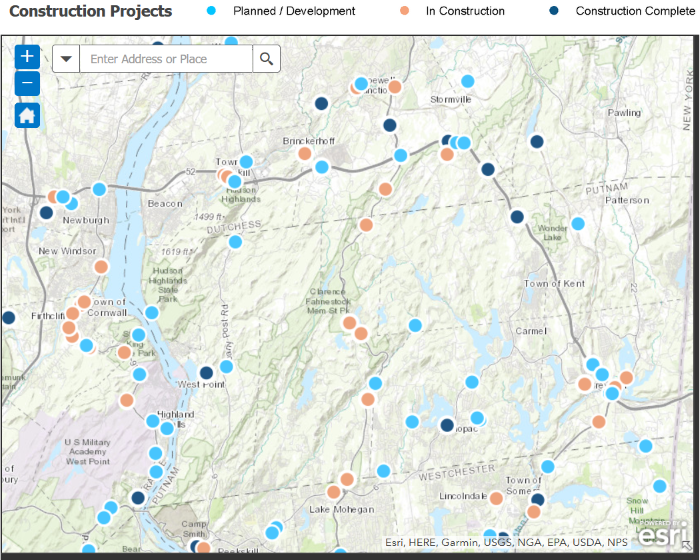 Replace or install traffic control devices at intersections in Dutchess, Ulster and Westchester counties, including replacing signals, installing flashing beacons and adding pedestrian signals and crosswalks on Route 52 at eastbound and westbound exit ramps off I-84 in Fishkill.

Build or repair sidewalks and ramps on state highway right of ways in southern Dutchess and Putnam to assure compliance with the Americans with Disabilities Act.

Replace deficient or obsolete rails along state highways in the Hudson Valley.

Paint steel surfaces throughout the Hudson Valley to protect against corrosion because of acid rain and de-icing agents.

Working with Central Hudson, replace the lighting system in the Breakneck Tunnel in the Highlands.

Replace or upgrade signs in the Hudson Valley that have exceeded their useful life.

Correct or prevent problems related to the deterioration of components on four structures, including over Clove Creek on Route 9 in Philipstown.

Repair or replace storm water catch basins in the Hudson Valley to ensure that the drainage systems function as designed.

Take immediate action to repair and prevent degradation of state highways during emergencies.

Remove overgrown or undesirable vegetation and litter, including at exits along I-84 in Dutchess, Orange and Putnam counties.

Resurface the parkway from the interchange at I-84 in East Fishkill to Route 55 in LaGrange.

Repair or replace select culverts on state highways in Orange, Putnam, Ulster and Westchester counties, including along Route 9 in Philipstown. Roadway, sidewalk, wingwall and rail work will also be completed.

Correct pavement deficiencies on Route 52 from Merritt Boulevard to Wiccopee Creek in Fishkill and East Fishkill and from Old State Road to the Putnam County line in East Fishkill. The work will primarily consist of milling the existing pavement and resurfacing the roadway with an asphalt overlay.

Install wireless sensors that will enable remote signal phase retiming in response to traffic volumes for four systems in Dutchess and Westchester counties, including on Route 9 in Fishkill. The retiming effort will reduce delays and improve air quality by reducing the number of idling vehicles.

Resurface state highways in the Hudson Valley in high accident locations that are typically related to wet weather or slippery pavement.

Explore subsurface soil conditions to provide data needed in advance of highway, bridge and culvert design in the Hudson Valley.

Apply epoxy and preformed pavement markings on state highways in the Hudson Valley to ensure markings maintain their delineation and reflectivity.

One thought on “Road Warriors”