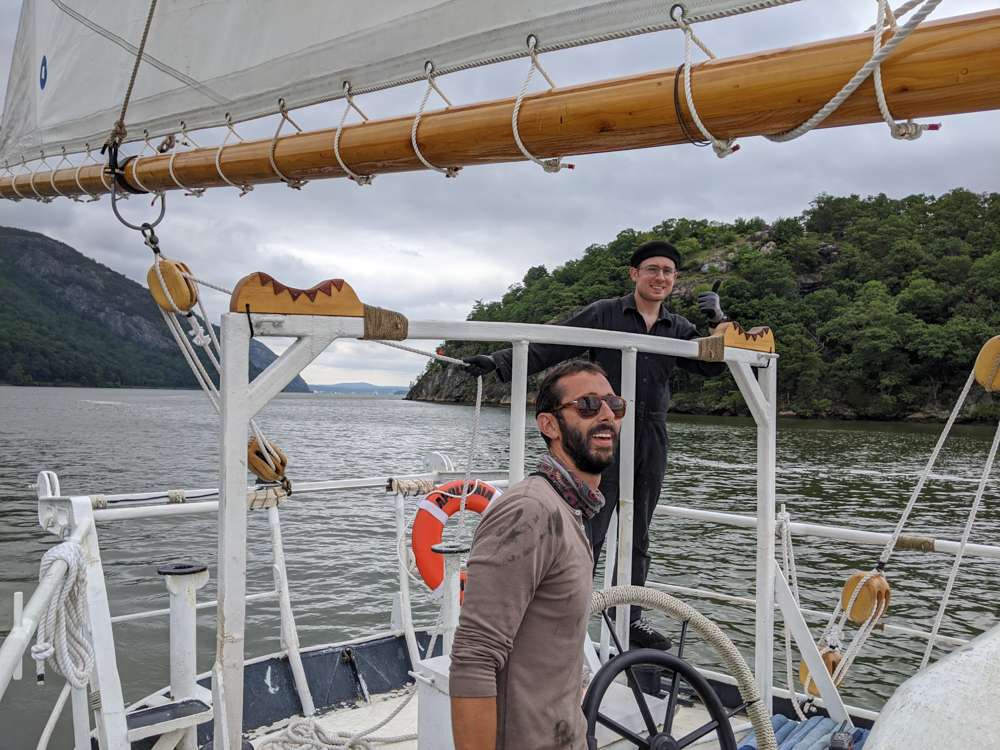 Capt. Sam Merrett (left) and Roman Horst, a crew member, aboard the Apollonia in the Highlands (Photos provided)

Sam Merrett is the captain of the Apollonia, a 64-foot restored sailboat from the 1940s that last year began acting as a carbon-neutral shipping vessel, delivering goods up and down the Hudson River powered only by wind.

In advance of the ship’s next voyage, Merrett spoke this week from his home outside of Hudson about seasonal shipping, healthy competition and why “good weather” means something different to a sailboat shipper than it does to people on terra firma. The Apollonia may make a stop in Garrison early next week.

Is your usual trip from Hudson to New York City and back?

That’s our regular, 120-mile run, which we’ve done five times this season, although we talk about the whole Hudson River as our route because we have made trips to Albany.

Once you deliver to New York City, do you usually return empty?

We always try [to find northbound cargo]. We have a number of coffee shops upstate that get bulk deliveries from us. We pick up beans from a place called 9th Street Espresso in Manhattan and Gotham Roasters in Brooklyn. The other northbound cargo that I’m excited about is jalapeno peppers. One of our longtime partners is a company called Poor Devil Pepper in Hudson that makes these delicious, lacto-fermented hot sauces. We learned recently that their peppers come from Hepworth Farms in Milton, about 50 miles south of us. So on this next run we’re going to pick up 100 bushels of jalapenos and hope this will be one of our most consistent northbound cargos at this time of year, when jalapenos are in season. We’re trying to work with local folks to keep track of the things that have a seasonality, and the desirable times for production. So on this trip we will sail back up the Hudson mostly full.

The word down at the docks is that you’re stopping in Garrison on Tuesday (Sept. 21).

There’s a good chance, but it could be Monday. We do our best job to make a plan, but there are so many things that can shift it a little bit. Early in the week we’ll be in Garrison delivering flour to Signal Fire Bread. We have two producers: Sparrowbush Farm in Livingston, which is where the flour for Signal Fire is coming from, but it looks like we’ll also be hauling flour from Wild Hive [in Clinton Corners]. The goal for us is to move things on the ship, add to the story of it, decrease the carbon footprint, all of that, but we also want to make sure we’re moving things people want. If someone wants sustainable shipping but wants this flour instead of that flour, the last thing I would want to do is force them to use a product they don’t want. 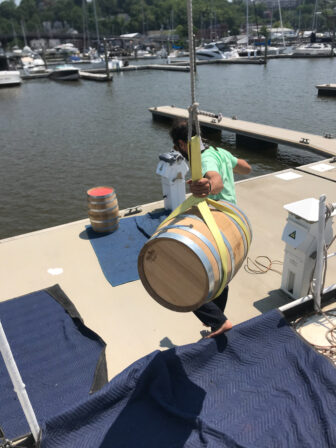 What other bulk cargo do you carry?

We’ve moved so much malt with this ship. It’s usually the backbone of the runs, about 10,000 pounds of local malt to beer makers. We did a shipment earlier this year of oak logs for mushroom cultivation from Cornell Small Farms to Brooklyn. That was an awesome cargo that I never would have imagined.

How long is the trip?

I schedule the crew for two weeks, but usually it’s 10 to 12 days. It’s about four days down and four days up, and then you factor in the loading and unloading, the coordination and the potential for bad weather — for us that’s a beautiful sunny day with no wind. Our last run went great because of the hurricanes; we got a lot more wind than we usually get in August. Typically, September and October are windy but not July and August.

How deep into the winter do you go?

We’re going to call it quits in November this year. I’m of the mind — and some of my crew members feel the same way — that we would much rather sail in cold weather than in these burning hot days when you’re baking in the sun with no escape. When it’s cold, you can always layer up. Plus, we rely on all the waterfront infrastructure. In Garrison, we work with the yacht club, and a lot of those places start shutting down at the end of October. There may not even be people to call and arrange the dockage. Milton, where we’re going to load up the peppers, that’s a new pier. They did the ribbon-cutting last week. It’s a floating dock so they probably take it out of the water in the fall. In Hudson, the city likes to take its docks out in October.

Where do you haul out?

Rondout Creek in Kingston, just past the Maritime Museum, to a place called the Rondout Yacht Basin. The Maritime Museum is probably our strongest partner; we’ll spend a lot of time on their docks doing the down-rigging. But it’s not a full-service marina and they don’t have a travel lift. The yacht basin is an excellent place. It’s a family-owned business. We’re as big as they can handle, but it works for us. 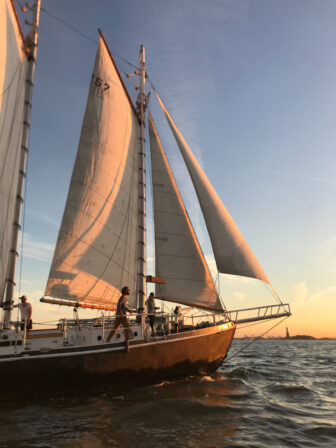 The Apollonia in New York Harbor

What is the hardest waterway to navigate in New York City?

It’s hard to not give the East River that award because of its marine traffic, which is not as predictable as you want it to be. It also has so much current because it’s got the Long Island Sound dumping into it and sucking out of it. And the wind is crazy. All over the Hudson River, the wind is confined by local geography. There will be an island you go around, or a bluff, or a bend you go across, or the Palisades. There’s lots of things that screw with wind and it changes fast. You go from Newburgh Bay down into the Highlands and suddenly you’re in a canyon. What buildings do to wind is bizarre. In the East River, you have moments where you’ll catch a breeze coming down the street, it’s strong, and then a moment later you’re in the shadow of the next building or a bridge or a ferryboat coming by. It’s challenging.

Until I canoed the East River a few years ago, it hadn’t hit me that they call that northern tidal strait “Hell Gate” because the whirlpool there acts like a gate to Hell.

I’ve been on some powerful boats there, but it’s never a good idea to go against that current. I’ve been in 6 to 7 knots of current [7 to 8 mph]. That’s a lot of water moving. Then you start to imagine what that looks like underwater, and what would happen if you fell in.

What will it take for your operation to become profitable?

I hope we answer that question next season. All of the producers we work with, all of our shipping partners, are small-scale producers. We don’t want to burden them with the costs that come from the fact that it’s more expensive to ship on a schooner than by truck. We’re working on new revenue streams. The best example of this is the breweries we work with, like Big Alice in Long Island City. We delivered grain to them last month, and they want more grain next month to make a beer about the Hudson River and the Apollonia. It would be amazing if they sold that beer for an extra 50 cents, with the proceeds to support us. It’s been hard because for as long as we’ve been running this operation at scale, there’s been COVID-19, and our original business plan was all about hosting events.

Would you like to have competition on the Hudson?

Absolutely. It would be such a joy to have other boats involved. Not only would that expand the amount of cargo, it would expand the impact. People only catch sight of us on the river once a month, maybe once every couple of months. The more people see this, if there were always schooners loading or unloading, it becomes easier for all of us. Maybe 50 or 100 boats into it, the competition would be a problem. But since right now we’re the only one, I would love to see 10 next season. That would be a great problem to have.

One thought on “Shipping for a Small Planet”