Beacon posted a pair of blowout wins over new Section IX opponents last week, hammering Port Jervis and Monticello each with 8-0 finals. The school moved its athletics this year from Section I to IX. 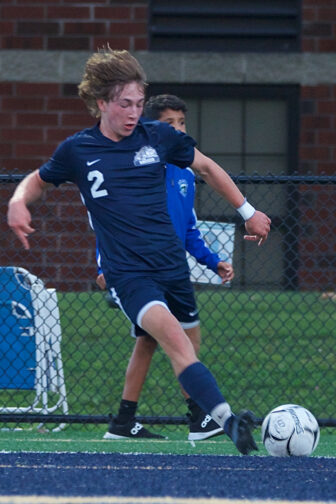 Beacon’s Chase Green had three goals against Port Jervis and two versus Monticello in 8-0 shutouts.

The previous Friday (Sept. 10) at home against Monticello, Green and Liam Murphy each scored twice, and Jack Philipbar, Alex Wyant, Ruiz and Kelly each had a goal.

Haldane had wins on Monday at Woodlands, 5-1, behind a hat trick from Ryan Eng-Wong and goals by Max Westphal and Emilio Schweizer, and on Sept. 9, hosting Blind Brook, 2-1, on goals by Eng-Wong and Westphal.

The Blue Devils dropped a 2-1 decision to Pleasantville (Eng-Wong had Haldane’s goal) and a 4-1 verdict to Lakeland (Eng-Wong again). 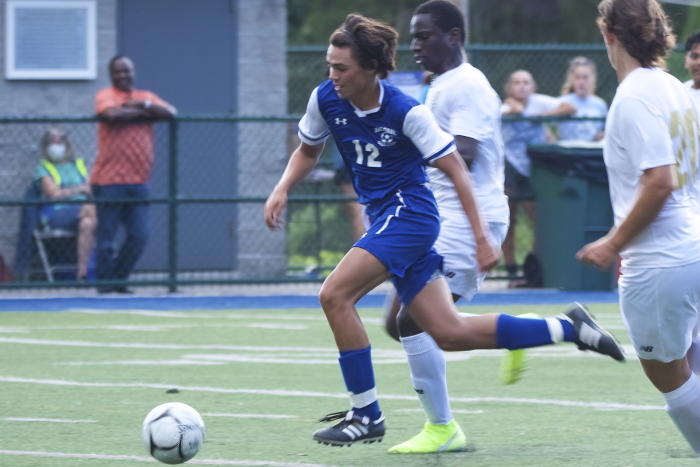 Ryan Eng-Wong “has been on fire,” his coach said, scoring five goals in three games for Haldane. (Photo by S. Pearlman)

Haldane (2-2) will host Hamilton today (Sept. 17) at 4:30 p.m. (which will be livestreamed at bit.ly/haldane-stream) before traveling to Peekskill and Croton-Harmon next week.

Beacon defeated Port Jervis, 6-2, on Tuesday (Sept. 14), improving to 3-0. Chelsea DerBoghossian scored twice, and Maddie Bobnick and Claire Derrenbacher had a goal and assist apiece. Devyn Kelly also scored off a pass from Olivia Del Castillo. Kasey Senior added an assist and Sara Gonzalez had a goal off a free kick in the second half.

“We were up 3-0 early but were a little shaky to end the first half, and let Port back into the game,” said Coach Hugo Alzate. “The grass field made it challenging, but the girls were able to adjust by halftime. I told them that we had to score the first goal in the second half and we did — five minutes in. Sara’s free kick sealed the deal. I trusted her to take the kick and she buried it.”

The Bulldogs were scheduled to visit Valley Central today (Sept. 17), host Washingtonville on Monday, travel to Minisink Valley on Wednesday and host Cornwall Central on Friday.

and select Beacon games at nfhsnetwork.com or through links at beaconk12.org/athletics.

The Haldane girls won their season opener, 3-1, over Westlake on Sept. 10 in Cold Spring. Jillian Weinpahl had 10 kills and Meghan Tomann added six. Tomann led in assists (7) and digs (18), and Scotia Hartford had three blocks. Mikayla Santos had 11 aces in the win.

The Blue Devils travel to Briarcliff today (Sept. 17) and host Keio on Saturday at 11 a.m.

The Beacon girls dropped a 3-0 decision on Wednesday to New Paltz, falling to 1-3. The Bulldogs are scheduled to visit Cornwall Central today and host Marlboro Central on Monday at 4:30 p.m.

In their first four matches, the Beacon girls lost twice to Hendrick Hudson (4-3 in both), and defeated Goshen, 4-3, and Pine Bush, 7-0.

“I was most impressed by Maura Lane and Isabelle Ray,” said Coach David Ryley. “Maura had to battle from behind numerous times. Isabelle improved her consistency and was able to adapt her game based on her opponent’s.” 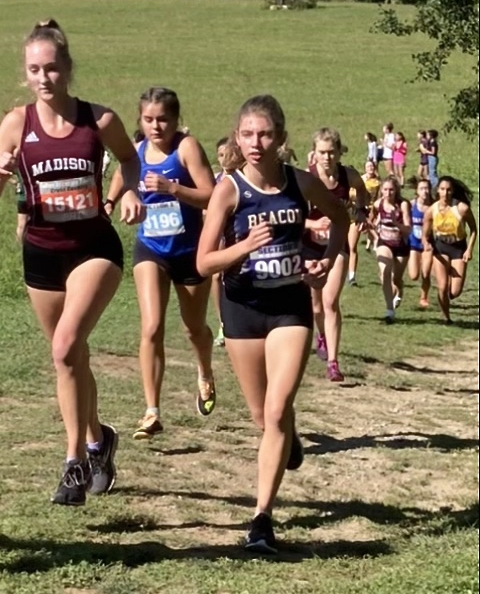 The Beacon girls had only four runners, but sophomores Ella Cason and Rachel Thorne finished first and second.

“I was very happy with the tighter compression in the boys’ top five,” said Coach Jim Henry. “They’re starting to run more as a team than individuals [which is important for scoring]. I was also excited to see the improvement of my top two girls. The other Section IX teams are starting to notice.”