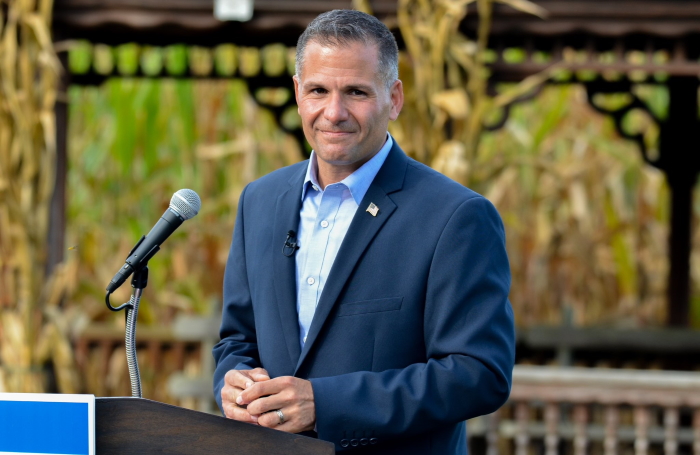 Molinaro announced his campaign on Tuesday in Rhinebeck. (Campaign photo)

Dutchess County Executive Marc Molinaro will challenge Democratic Rep. Antonio Delgado for his congressional seat next year, seeking to represent a district whose contours may change as a commission redraws state and federal legislative boundaries based on new census figures.

Molinaro, a Republican barred by law from seeking a fourth term as county executive, filed with the Federal Election Commission on Sept. 17 to run for the 19th Congressional District. He made his official announcement on Tuesday (Sept. 21).

Molinaro announced his campaign on Tuesday in Rhinebeck. (Campaign photo)

The district spans both sides of the Hudson River and covers all or parts of 11 counties: Broome, Columbia, Delaware, Dutchess, Greene, Montgomery, Otsego, Rensselaer, Schoharie, Sullivan and Ulster.

Democrats account for 34 percent of the 19th District’s active voters, and Republicans, 31 percent, but the makeup could be different for next year’s elections.

A voter-approved commission, composed of 10 members appointed by the state Legislature’s Democrats and Republicans to redraw district boundaries for New York’s House of Representatives and state Senate and Assembly seats, released two sets of competing draft maps on Sept. 15 after failing to reach consensus on a single proposal.

Each proposal would alter the boundaries of both the 19th and the 18th congressional district, which includes Beacon and Philipstown and is represented by Sean Patrick Maloney, a five-term Democrat.

The commission is required to submit a plan by Jan. 15 to the Legislature, where both the Assembly and Senate must approve it by a two-thirds majority. If at least seven of its 10 members are unable to agree on a new map, the commission must submit the one receiving the most votes.