We know Highlands dams are old. It’s what we don’t know that’s a problem.

The first flood was a warning.

On July 14, 1897, after 22 days of rain, the upper dam on the Melzingah Reservoir failed and water began rushing down Mount Beacon toward a brickyard and boarding houses.

Residents fled, but when the lower dam also burst at 2:30 a.m., the entire reservoir was released. As homes were carried down the mountain, their occupants leaped from the windows. The railroad tracks were destroyed. The official death toll was eight, but accounts noted that a “small settlement of Arabs, 30 or 40 in number, occupying half a dozen huts” had disappeared.

Among the dead was Mary Conroy, wife of John Conroy, the brickyard engineer. The two had met eight years earlier when John saved Mary from the Johnstown Flood of 1889, in which a hastily built earthen dam burst and killed 2,000 people.

In the years after that day, the Melzingah Dam and the Mount Beacon Dam farther up the mountain were each rebuilt and reinforced. But they are still now nearly 100 years old, decades past the average age of an American dam. Maintaining them is a Herculean task. None of the dams in the Highlands is known to be unsafe, but the only surefire method to measure the limits of a dam is when it reaches them.

Every four years, when the American Society of Civil Engineers updates its Infrastructure Report Card, there’s pressure to improve the grade given to America’s dams, which has been a “D” for the past several years.

Del Shannon, the president of the U.S. Society on Dams and a co-author of the report, said a better grade was being considered, “but then things like Edenville and Oroville happen.”

In May, two dams in Edenville, Michigan, failed, leading to the evacuation of 10,000 people. In 2017, a dam in Oroville, California, failed and 200,000 people had to be evacuated. “We keep having failures,” said Shannon.

About 15,600 dams in the U.S. are classified as “high hazard,” which doesn’t refer to their condition but to what would happen downstream if they failed, including loss of life. The Highlands has seven such dams: Mount Beacon and Melzingah and the Glenham hydroelectric, upper and lower Cold Spring dams, Cargill Reservoir and Perkins Estate Pond Dam at Glynwood.

Over the past 20 years, the number of high-hazard dams has doubled, typically because an older dam built in an underpopulated area (usually with less stringent safety features) is now surrounded by development.

“If a dam is in the middle of nowhere, and it fails, and all it does is knock over a couple of trees, no one cares that much,” said Shannon. “But if you build your house at the bottom of a dam, that’s a much bigger deal.”

Adding to the problem is that, unlike with roads, there is no single federal agency that oversees dams. Every state is on its own when it comes to figuring out what makes a dam safe. In New York, the task falls to the Department of Environmental Conservation.

The DEC rates the Mount Beacon and Cargill dams as “deficiently maintained”; the Melzingah and Cold Spring reservoir dams are worse: “unsound.” (No dam in the Highlands has the lowest rating: “unsafe.”) 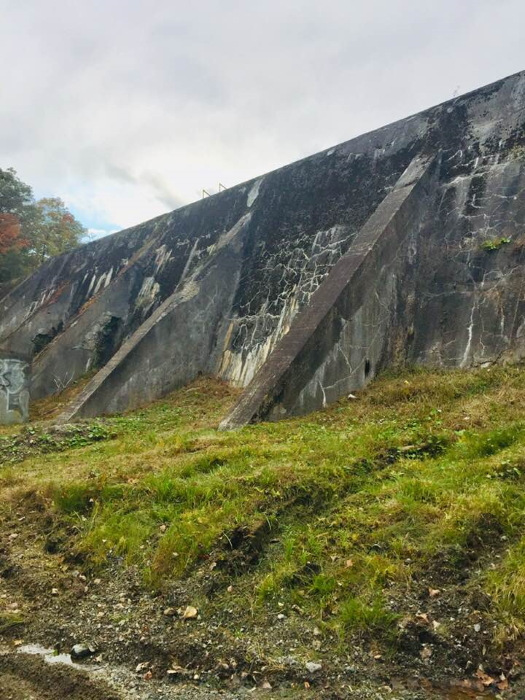 A view of the dam at the Mount Beacon Reservoir, which holds 124 million gallons of drinking water. (File photo by Mary Fris)

Built in 1889 out of “rubble and masonry,” according to Ed Balicki, who directs the City of Beacon Water and Sewer Department, the Mount Beacon dam has undergone repeated repairs to make it stronger. In 1994, the city had vertical metal rods drilled into the structure. During an inspection of Beacon’s water system in 2018, Dutchess County found the structure to be “poorly maintained with visible leaks and the concrete surfaces showing widespread decay.”

In December, the city received $2.5 million to enlarge the spillway capacity and repair “crumbling” and “spalling” in its body, as well as to add new piping and some fixes to the pocket reservoir. The improved spillway would handle rainfall from a “once-in-a-lifetime” storm, Balicki said at the time.

The work was expected to begin this past summer but the bids collected over the summer were too high because of pandemic supply chain problems. The city will re-bid the project over the winter with a longer time frame to complete the work. The city is working with the DEC to finalize a plan for Melzingah.

In Cold Spring, both reservoir dams have been rated “unsound,” and in 2017 an engineer told the Village Board repairing the upper dam would cost between $3.8 million (a single spillway that would require the reservoir to be lowered by 1.2 feet) or $4.2 million (multiple spillways). The village has been negotiating with New York to tap into the Catskill Aqueduct for water if and when fixes are made.

Balicki said that an infusion of federal money from an infrastructure bill being considered in Congress would be helpful for repairs and upkeep and to deal with problems such as at the Pocket Road catchment reservoir at the Mount Beacon dam, which is losing 100,000 gallons of water a day through its rock and concrete face. 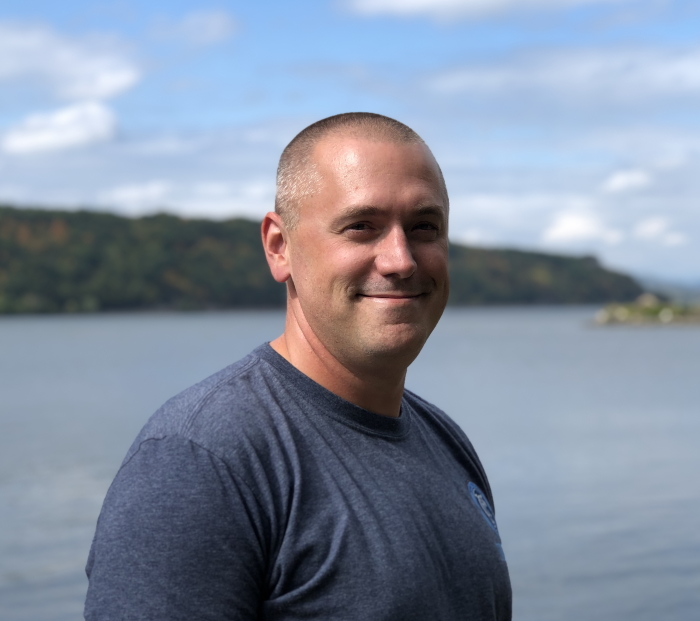 Getting money from the state for such projects is difficult, Balicki said, because there’s not enough to go around. A $600 million state fund designed to pay for local water projects may sound like a lot, he said, but the average cost to replace a water main is $500,000 per city block. What’s more, gathering the information to apply for grants is an investment in time and money that may not pay off.

One piece of good news is that 97 percent of New York’s high-hazard dams — including all those in the Highlands — have what’s known as an Emergency Action Plan on file, one of the highest rates in the country. It tells municipal leaders and first responders the steps that should be taken after a dam failure, including what areas would be affected.

In 2013, for example, when Cold Spring’s Emergency Action Plan was being prepared, an engineering firm shared scenarios such as a rain-drenched failure in which a wall of water would reach the Hudson in about an hour, versus a sunny day scenario where it might take 90 minutes just to get to the mouth of Foundry Brook.

Data contained in the plan, including residents’ contact information, would be updated annually, the engineer said at the time. More than 100 residences are located within the affected area, although in some sections, such as along Fishkill Road and Foundry Brook below the Route 9D bridge, there are few houses.

The bad news is that the plans are not readily available, which means that residents who would be affected probably have no idea they are in a danger zone. 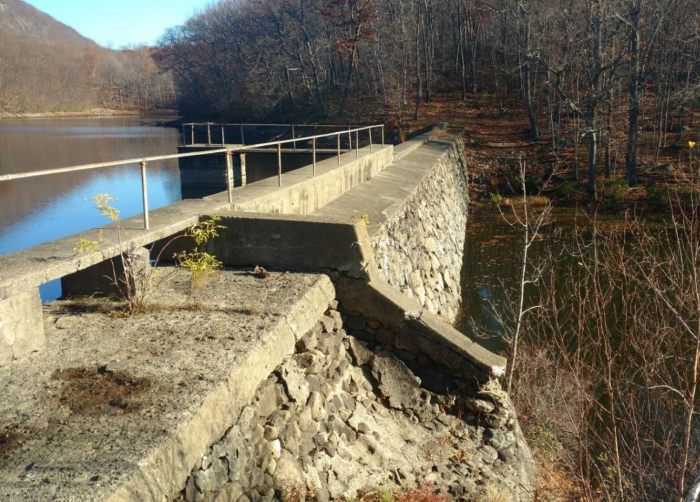 A 2017 assessment estimated it would cost the Village of Cold Spring about $4 million to repair this reservoir dam. (File photo)

“Those things aren’t the same as a flood map where there’s no dam,” Shannon said. “A dam is a massive body of water and releasing that in a hurry has a devastating impact. You could live far away from what you think is the flood plain of a dam and actually be in the crosshairs.”

It’s that lack of knowledge at all levels that Shannon said is his biggest concern, and one that a federal infrastructure bill could greatly alleviate. The state DEC still has only rated about 80 percent of the state’s high-hazard dams, and the two most recent high-profile failures in the U.S., at Edenville and Oroville, appeared to have happened for reasons that weren’t on anyone’s radar. Preliminary reports from Edenville suggest that the culprit was previously undocumented seepage; in Oroville, no one realized the anchors holding the concrete spillway weren’t deep enough.

“That should scare the bejesus out of just about everybody,” Shannon said. “How many other dams out there are like that? I don’t know. We don’t have the resources to do a big evaluation of every single dam.”