Beacon traveled on Sept. 17 to Hyde Park and easily defeated Roosevelt High School, 21-4, behind quarterback Jason Komisar, who ran for one touchdown and threw another.

In addition, Caliel Daughtry returned a punt 72 yards for a TD and had two interceptions; Jose Rodriguez had six receptions, including a TD; and Isaac Hansen ran for 80 yards on 15 carries.

“That was an important win,” said Coach Jim Phelan. “We stuck together.”

Beacon (2-0) was scheduled to host Saugerties today (Sept. 24) but the Sawyers are in quarantine so the Bulldogs have no opponent until next week, when they travel to Goshen on Oct. 1.

Haldane was scheduled to travel to Woodlands on Sept. 18, but the Falcons had to forfeit because of COVID-19 protocols. Haldane (2-0) will visit Bardonia on Saturday to take on Albertus Magnus (1-1).

Select Haldane games are broadcast online at bit.ly/haldane-stream and select Beacon games at nfhsnetwork.com or through links at beaconk12.org/athletics.

Beacon continued its strong play and dominance of Section IX, routing Valley Central, 6-0, on Tuesday (Sept. 21) at home to improve to 4-1. 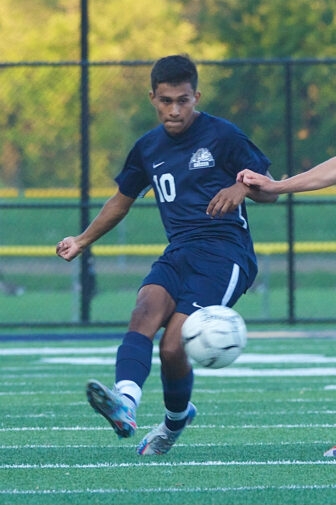 Beacon’s Andre Alzate had two goals in a 6-0 win over Valley Central. (Photo by S. Pearlman)

Andre Alzate had two goals and Miguel Ruiz, Dillon Kelly, Jack Philipbar and Tommy Franks each had one.

Led on defense by backs Gavin Ladue and Avery Davis, and keeper AJ Lucas, Beacon hasn’t allowed a goal in its first four games against sectional opponents. The Bulldogs are ranked sixth in the state among Class A teams by the New York State Sportswriters Association.

The Bulldogs were scheduled to host Washingtonville on Thursday and visit Minisink Valley on Monday (Sept. 27).

In Cold Spring, Haldane lost to Hamilton in overtime, 1-0, on Sept. 17, spoiling a strong effort by keeper Ronan Kiter (six saves) and the defense.

On Monday (Sept. 20), the Blue Devils fell to Peekskill, 3-2. Both Haldane goals came from Ryan Eng-Wong, on assists by Matt Silhavy and Will Sniffen. Kiter had seven saves.

Down two goals, Haldane came back against Tuckahoe on Monday (Sept. 20) but had to settle for a 3-3 tie when the Tigers scored with two minutes remaining.

The Blue Devils trailed 2-0 at the half before Chloe Rowe, Ella Ashburn and Paula Herrera gave the team the lead. The teams did not play overtime because of darkness.

“We’ve been plagued with injuries all season,” Coach Mike Lentini said. “Our starting keeper [Ruby Poses] is out with a broken nose, but Betsy Cates came up big for us, making seven saves. We’re looking forward to having Bianca Harmancin and Sara Ferreira back, as well, as we move into league play this week.”

The Beacon girls lost to Washingtonville, 4-1, on Monday at home. Reilly Landisi scored the lone Beacon goal and keeper Hope Cleveringa had 10 saves.

Last week Beacon tied two-time defending Section IX, Class A champ Minisink Valley, 1-1. Minisink scored in the 50th minute of the second half but Maddie Bobnick set up Chelsea DerBoghossian to tie the game in the 72nd minute.

Devyn Kelly had 15 saves in goal for Beacon, which battled through double overtime to earn the tie.

“The girls showed incredible poise, especially on defense, to keep that team to one goal,” Coach Hugo Alzate said. “They just never stopped playing, and that’s all you can ask for as a coach.”

Beacon (3-2-1) will host Cornwall today (Sept. 24) and travel to White Plains on Saturday.

Visiting Beacon played a strong match on Wednesday to defeat Minisink, 6-1. It marked the third consecutive day the team played on the road, and the No. 1 doubles team of Emma Sandison and Lindsay Darcy won their sixth straight match.

Beacon swept host O’Neill on Tuesday behind notable play by Isabelle Ray (No. 2 singles) and Sandison and Darcy. On Monday, the Bulldogs (5-1) fell to Washingtonville, 6-1, with Sandison and Darcy scoring the lone win.