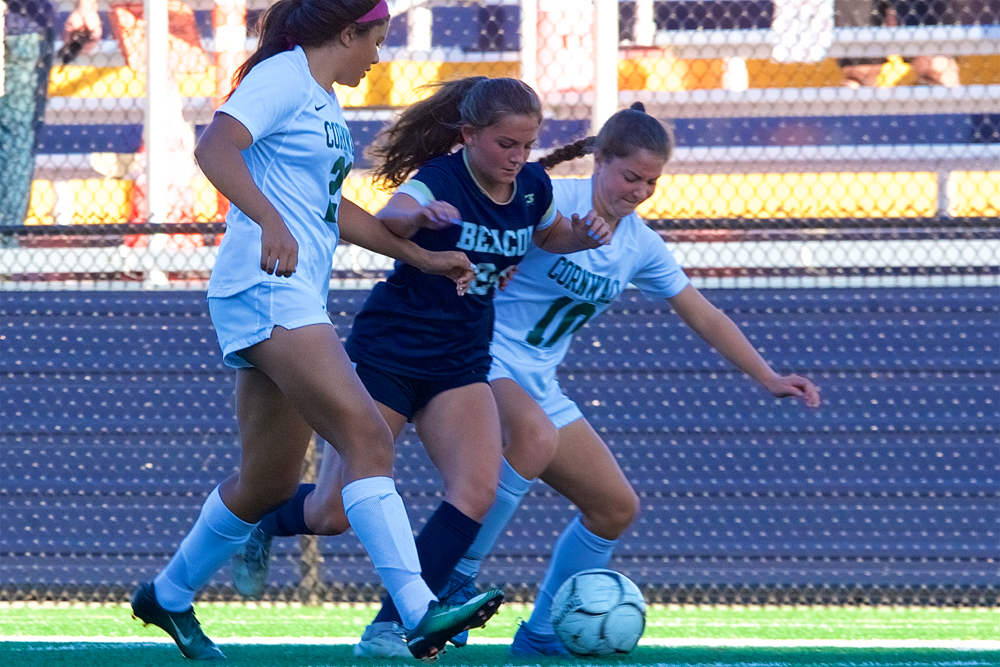 The Beacon High School girls’ soccer team picked up wins last week over Cornwall (4-1) and White Plains (1-0) before absorbing a 4-0 loss on Tuesday (Sept. 28) at Goshen.

“The girls have been playing well,” said Coach Hugo Alzate. “Unfortunately, our starting center back [Emma Campagiorni] sustained a major injury, and we felt her loss against Goshen. That’s the first time we’ve been shut out all season.”

At White Plains on Sept. 25, Chelsea DerBoghossian scored in the 26th minute of the first half after she intercepted a pass. Devyn Kelly had five saves in goal.

At day earlier at home, the Bulldogs rolled over Cornwall behind two goals from DerBoghossian and two from Reilly Landisi. Maddie Bobnick and Landisi each had assists, and Claire Derrenbacher had seven saves in net. 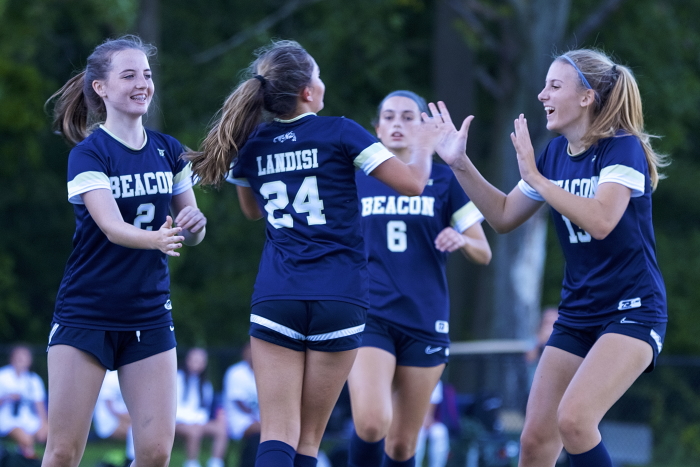 The Bulldogs celebrate a goal by Reilly Landisi (24) last week at Beacon. (Photo by S. Pearlman)

Haldane placed third at a tournament hosted by Hendrick Hudson, falling 4-1 to Croton before defeating Peekskill, 6-0. Bianca Harmancin and Chloe Rowe were named to the All-Tournament team.

Harmancin had a hat trick and Rowe added two goals and an assist in the victory over Peekskill. Betsy Cates, playing in place of injured goalie Ruby Poses, had seven saves. Against Croton, Cates stopped eight shots.

The Blue Devils (2-4-1) were scheduled to host Croton-Harmon on Thursday (Sept. 30) and travel to Putnam Valley on Saturday. The team will host Pawling and North Salem next week before a 4 p.m. game on Oct. 8 against Arlington for homecoming.

In the first half of the boys’ soccer game on Wednesday (Sept. 29) between Pawling and Haldane, both teams had plenty of quality scoring opportunities. Unfortunately for the home team, it was Pawling that converted on three chances on its way to a 3-1 win. 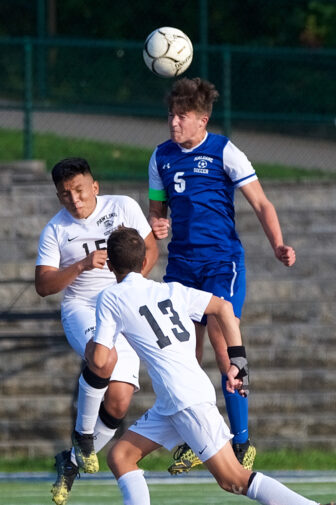 Will Sniffen (5) of Haldane heads the ball during Wednesday’s loss to Pawling.

Haldane scored midway through the half when Clement Grossman found the back of the net to make it a 2-1 game. But Pawling kept the pressure on and scored with seconds remaining in the half.

“We came out flat,” said Coach Ahmed Dwidar. “We need more intensity early. We may have underestimated them. In the second half, we had lots of chances but just didn’t connect.” Keeper Ronan Kiter had four saves.

On Saturday (Sept. 25) at North Salem, the Blue Devils played well in a 2-2 tie. Matt Nachamkin and Matt Silhavy each had goals, and Kiter had seven saves.

“I was happy with that tie, because they beat us 6-0 in the playoffs last year,” said Dwidar. “We had intensity from the opening whistle.”

On Sept. 24, Croton edged Haldane, 4-3, on a penalty kick with 90 seconds left. Ryan Eng-Wong had two goals and Emilio Schweizer had one. Kiter stopped six shots. 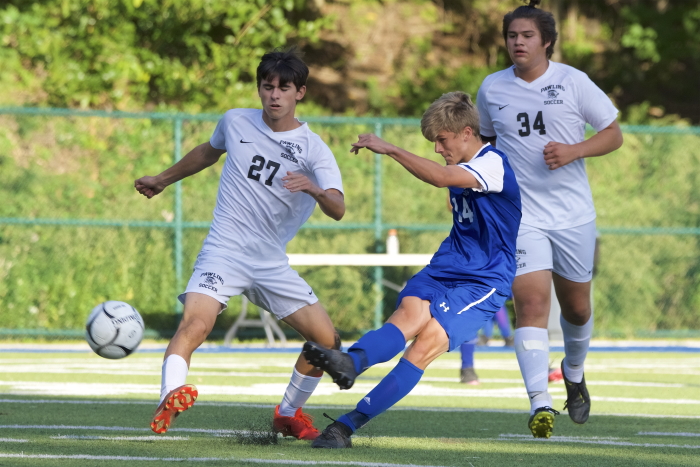 Haldane (2-7-1) is scheduled to visit Tuckahoe on Saturday at 11 a.m., travel to Putnam Valley and host Croton-Harmon next week before matching up at home with North Salem at 2 p.m. on Oct. 9 for homecoming.

Beacon defeated Cornwall, 2-1, on Wednesday in what Coach Craig Seaman described as “a great result against a top team” in a game that had “a postseason feel.” Beacon is ranked No. 5 in the state in Class A by the New York State Sportswriters Association, while Cornwall is No. 10.

Jack Philipbar and Miguel Ruiz both scored on assists from Chase Green.

On Monday (Sept. 27), Beacon topped Minisink Valley, 1-0, on a last-minute goal by Green. “We had the majority of the chances but struggled to score,” Seaman said. “Minisink played physical and hard, making it difficult to find a rhythm.”

Beacon (6-1) is scheduled to visit Goshen Saturday and Monticello on Monday.

After dropping its first four matches, the Haldane girls’ tennis team rebounded with a pair of wins, edging Westlake on the road, 3-2, and defeating North Salem at home on Wednesday (Sept. 29), 4-1. 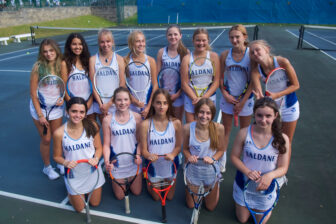 The doubles team of Amanda Johanson and Emilia Osborn won (6-2, 6-0), while Ellen O’Hara and Betsy McBride won by forfeit.

“We had a rocky start to the season, but we’ve started to hit our stride,” said Coach Simon Dudar. He noted that O’Hara and McBride, who are 5-1, have made steady improvement. “They’ve been playing some incredible tennis.”

Haldane (2-4) was scheduled to host Lourdes on Thursday (Sept. 30) and will face Croton-Harmon, Valhalla and Carmel next week before hosting Irvington on Oct. 8 for homecoming.

Haldane was doomed by turnovers and penalties in a 15-8 loss on Saturday (Sept. 25) at Albertus Magnus. The team’s lone touchdown came in the second quarter after Soren Holmbo recovered a fumbled snap on a punt. Three plays later, quarterback Ryan Van Tassel found Ryan Irwin on a four-yard pass.

The Falcons evened the score in the third quarter on a five-yard run and then scored with 55 seconds remaining in the game on a six-yard run.

Tommy Tucker returned the ensuing kickoff to the Magnus 40, where the Blue Devils took over with 50 seconds left. The team reached the 10-yard line but a pass by Van Tassel (10-of-17 for 66 yards, and 66 yards rushing on four carries) was picked off.

“The Magnus player made a great play on that interception,” said Coach Ryan McConville. “Turnovers hurt us in this one, and some penalties. We have to clean those things up.”

He said that Holmbo, who also had an interception, played well, as did Giancarlo Carone (who led the team in tackles) and Jake Mason, who snagged his first interception.

The Blue Devils (2-1) are scheduled to play Hastings at home on Saturday at 1 p.m. and host Croton-Harmon for homecoming on Oct. 8 at 7 p.m.

Beacon (2-0) did not play last week. The Bulldogs are scheduled to travel to Goshen today (Oct. 1) for a 7 p.m. kickoff.