It’s the start of leaf-peeping season in the Hudson Valley, with 20 percent change in color noted on the I Love NY website and higher-elevation areas in the Catskills and Adirondacks further along.

In my landscape, the sugar maples, spicebush and ash are turning while the oaks and understory trees are behind. All the signals of fall are prompting the trees to get ready to drop their leaves.

Burning bush (Euonymus alatus) is an iconic fall landscape shrub. Along with butterfly bush (Buddleia davidii), it’s probably one of the best known and widely planted home landscape woody plants. Both are easy to grow, rewarding with color, and ubiquitous in the ornamental horticulture industry. Both are also not native to the U.S., found originally in Asia and brought here many decades ago.

The state Department of Environmental Conservation listed burning bush in 2013 as a “regulated” invasive species for its rapidly increasing distribution outside of the yards where it was first installed. Birds carried its seeds into wild areas where it grew into thickets, spreading also by suckering and sending up new sprouts.

Its ability to grow in full sun to full shade makes it highly competitive for space and resources with native woody plants while not offering anything of value to the ecosystems it enters, like habitat, forage or serving as a host for insects.

Falling into the regulated invasive species category means that while it can still be sold commercially, anyone who plants it must control it from spreading into wild areas. That sounds like a grayish-gray area to me, too, since containing it would mean removing at all the berries and shoots. Better not to plant it all and consider removing it and replacing it with some of these native alternatives that need a boost in our climate-changing, monoculture, developed landscapes. Best of all, each one is needed by birds, insects and wildlife.

Focusing purely on the aesthetics, red twig dogwood and gray dogwood have berries, blooms and colorful leaves in fall, and as a bonus, lovely, bright bark that’s visible in winter. Plant in a grouping or hedge in full or partial sun. The flowers don’t have the same impact as flowering dogwood but it’s not really fair to compare them. They have different shapes, definitely more of a shrub than a tree. In fall, the leaves of both red twig and gray dogwood turn a purplish-red color.

I find this understory tree more common in yards because of its spring blooms. It’s like a sweet pea vine in branch form on what can become a 20-foot rounded tree. Butterflies appreciate it and I like its heart-shaped leaves because it is easy to recognize out of its bloom season. In the fall, those leaves fade from green to soft yellow or greenish-yellow. No gaudy yellows here. 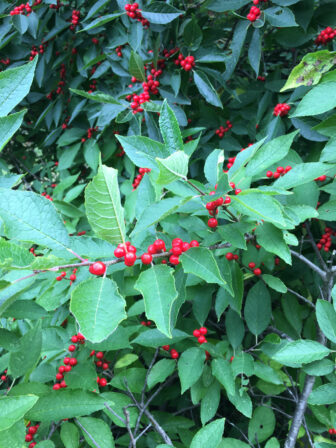 Winterberry bush will show off its red berry-covered branches after the leaves turn color and drop.

Winterberry (Ilex verticillata)
When I’m describing winterberry to someone, I recall the branches with red berries typically found in farmers’ markets around the holidays in December. They are sold as décor. The berries are also hugely popular with birds. In spring, winterberry has tiny white flowers that are hard to notice. I first found them because I wondered why clouds of bees were buzzing around mine. It gets a lot of action. The rest of the summer it’s a reliable placeholder and in early fall, the berries appear and last as long as the birds allow into midwinter, I’ve found. The foliage in fall has a purple tint but winterberry really shines after the leaves drop.

All things being equal, the American cranberry is probably the best one-to-one substitute for a burning bush in terms of size, shape, color, foliage and care. Entire volumes have been published about viburnums, so be sure to look for the Latin name to get this one. I’ve struggled with viburnum leaf beetles defoliating my cranberry bushes but there are treatments if you can pay more attention to your plants than I can. The flowers are lovely, too.

Oak Leaf Hydrangea
(Hydrangea quercifolia)
I wanted to add one that can tolerate some shade, too, and the oak leaf hydrangea is an all-around favorite. The white blooms glow in shadier spots, its oak-shaped leaves turn red and purple in fall, and the bark on mature bushes is appealing, too.

Running out of space, so here is a short list of a few others to check out:

One thought on “Roots and Shoots: Bright Leaves, Big Impact”